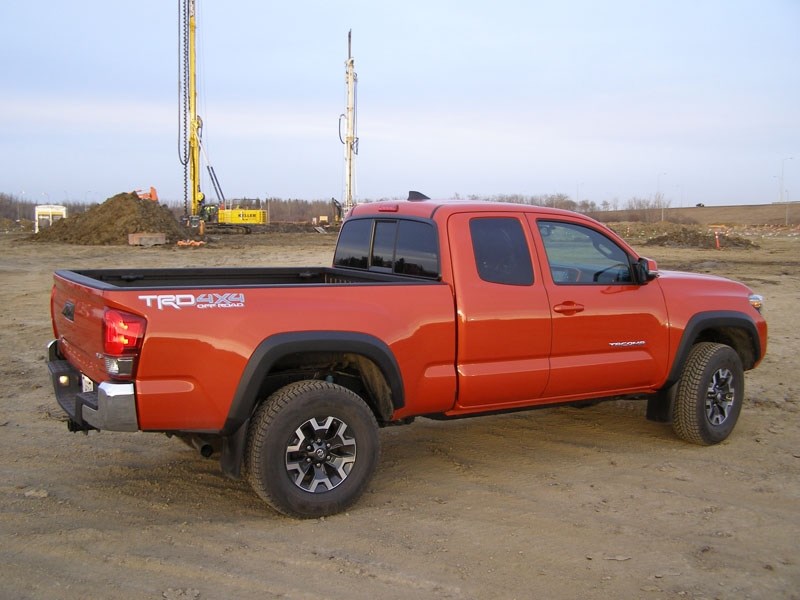 The Toyota Tacoma Access Cab 4x4 is a good mid-size truck capable of taking the driver almost anywhere there isn't a layer of pavement.

Now in its third generation the Toyota Tacoma is one of only three mid-size trucks selling in North America. It’s a big seller. General Motors sells two models of mid-size pickups and they too are selling well, but there will be a new competitor when Ford brings back the Ranger. The Tacoma has been with us since 1995 when it was a compact pickup. The second-generation Tacoma grew in every direction and increased the number of models.

The 2016 Tacoma comes in eight different models with two engine choices, three transmission, two drivetrains, two cab configurations, two cargo bed lengths and 12 trim levels. I would guess with such choices you’d have a hard time finding two trucks the same. The truck appeals to two types of owners, those who do go off-road and want a smaller sized pickup that can handle tough terrain and those owners who want to look the part, but rarely drive their truck off asphalt.

My test vehicle was a 4x4 Access cab well equipped including the TRD (Toyota Racing Development) off-road package priced at $2,475. The 3.5 litre V6 under the hood was backed by a six-speed automatic transmission. You can get a six-speed manual transmission. The V6 is an all-new Atkinson cycle V6 featuring direct and port fuel injection. It’s rated at 275 h.p. and up to 265 lb-ft of torque. A 2.7 litre four cylinder engine rated at 159 h.p. is also offered. That engine has 180 lb-ft of torque. The V6 pulls well but makes sounds like it’s straining to get up to speed. This was no different than the Tacoma I tested a few years ago. Clearly an issue Toyota engineers have not solved. Depending on options Toyota says the truck is rated for towing up to 6,500 lbs.

If the Tacoma looks like the previous generation truck, you’re right. It does in some respects but changes have been made inside and out. Character lines in the right places and black cladding around the wheel arches add to the rugged appearance of this rig. I like the one-quarter doors on the smaller cab of my test truck as they allow an easy way to throw junk behind the front seats or allow access for passengers to hop in the back. The jump seats easily hold small kids but are not ideal for adults. Unfortunately the front seats still feel like you are sitting on them not in them, but there is sufficient side bolstering. That’s my minor gripe about the interior. Otherwise the boom box-like instrument panel and infotainment system is good. There is a large NAV screen and everything else well placed for ease of use. Gauges are easy to see with a speedometer to the right and tachometer to the left. In between these instruments is a small screen that can display a myriad of information, including real-time fuel economy. Sound insulation is OK but the knobby tires also contribute some noise to the interior depending on the road surface.

From a driver’s perspective the windows provide good visibility in every direction. This is helped by large mirrors. The Access Cab V6 with the six-foot box is the type of mid-size truck I would prefer. It carries a long list of features: the new 3.5L Atkinson-cycle V6, a six-speed manual transmission, electronic throttle control system with intelligence, a six-foot cargo bed, Bilstein shock absorbers and all-terrain tires.

Total sticker price is $39,761.97 including freight but not GST. Overall a really good mid-size truck capable of taking the driver almost anywhere there isn’t a layer of pavement.