Third party ads are everywhere this election, and experts say the province needs to step in with regulation.
Oct 7, 2017 12:04 AM By: Kevin Ma 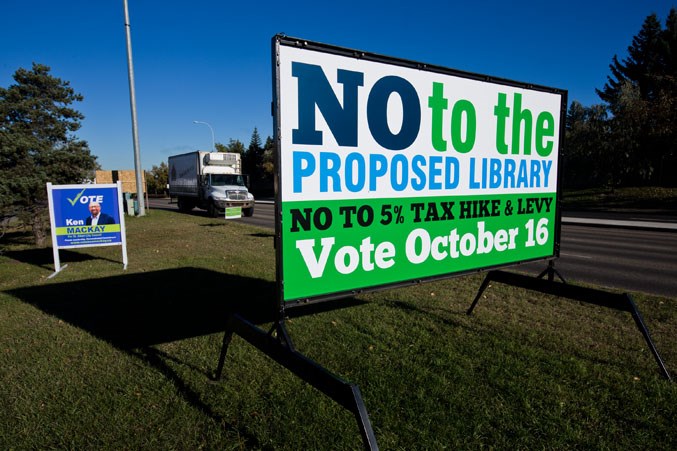 A third-party election ad spotted recently in St. Albert. Unlike traditional first-party ads, such as the one to the left, third-party ads are not regulated in municipal elections, meaning they can be anonymous and are not subject to spending limits or reporting requirements. Many scholars and local leaders have called for them to be regulated due to their potential to sway elections.

Is this new? Historian and former St. Albert mayor Richard Plain said third-party election ads appeared to be a 21st-century phenomenon in St. Albert, as he could not recall any significant amounts of them prior to then. The 2001 election featured an extensive ad campaign by the group S.E.N.S.I.B.L.E. Choice in favour of building what is now Ray Gibbon Drive, for example, while the 2007 one saw billboards everywhere criticizing his council’s ban on public smoking. This election was a bit different from past ones in that it has plebiscite questions, and several of the ads are directed at them. Plain said he supported regulations for third-party advertisers in local elections, saying they should either have the same restraints as candidates or be banned entirely. “Everyone needs to know who did what.”

A burst of controversial ads in this year’s election has prompted renewed calls from local leaders for the province to rein in third-party advertising. This election has seen an extensive amount of third-party advertising pop up in St. Albert and Sturgeon County in the form of road signs, pamphlets, and newspaper advertisements. A Gazette analysis suggests that third-party groups (defined as anyone that is not a registered political candidate) have placed about 11 election-related ads in this publication between Sept. 2 and Oct. 4, compared to about 16 from Sept. 7 to Oct. 19 (the last issue before Election Day) in the 2013 election. (Note that this does not include ads run by local governments or school boards.) Mayor Nolan Crouse (who was targeted by many of the 2013 third-party ads) said he was greatly concerned about third-party ads, as they had the potential to confuse and mislead the public. “The province has to do something about it,” said Crouse, who is not running for re-election.

The province has no rules in place for third-party ads in local elections, noted Lori Williams, professor of policy studies at Calgary’s Mount Royal University. That’s sparked controversy in her community, where the anonymous Save Calgary group has been actively campaigning against several candidates this election. “There’s nothing preventing someone from spending millions or even billions of dollars on advertising, and that’s a loophole I think we need to look at closing,” she said. Ads can sway elections, Williams said – that’s why people spend so much money on them, and why ads are regulated in federal and provincial elections. Their impact is tough to predict, however, as voters are influenced by so many factors. Whereas Alberta municipal election candidates are bound by rules when it comes to ads (such as spending limits and disclosure of identity), third parties can act like “weasels in a chinchilla ranch” and advertise however they want, as much as they want, said Jim Lightbody, professor of political science and municipal politics at the University of Alberta. “It’s Wild West country,” he said, and it can be frustrating to candidates. Crouse noted that third-party ads can be anonymous or represent foreign or vested interests. They also present financial risks to donors, as third parties aren’t required to report on how they use their money. “It’s good for the Gazette but bad for democracy when it comes to accountability for people’s money,” he said. Lightbody said the drive-by-smears often featured in third-party ads can also deter people from getting into local politics. “For the good of local democracy, where it’s hard enough to get good people to run, we don’t need this kind of deterrent.” Local elections tend not to involve the big bucks or political parties that federal and provincial ones do, which is maybe why the province hasn’t regulated them yet, Williams said. But as third-party ads can sway elections, they represent a threat to our political and legal equality if unregulated. “We don’t want somebody just because they have money and power to be able to buy an election.” She and Lightbody called on the province to bring in rules such as registration, spending limits and reporting requirements for third parties in municipal elections. Ontario had already done so, Lightbody noted. St. Albert MLA Marie Renaud said the province was absolutely committed to looking at this issue, but that they wanted to give municipalities more time to comment on it. While she had no problem with special interest groups sharing ideas in an election, she said there had to be transparency when it came to who was behind third-party ads. “If you have nothing to hide, then you have nothing to hide.” Williams said she didn’t support the idea that restricting third-party ads would restrict free speech. “It’s not about limiting what people can say. It’s levelling or making fair the playing field.”