Volunteering drives happiness up in the world

Volunteers are superheroes in civilian's clothing at the best of times. During a pandemic, sometimes other costumes can help them drive home the need for everyone to help everyone else.
0
Apr 8, 2020 5:10 PM By: Scott Hayes 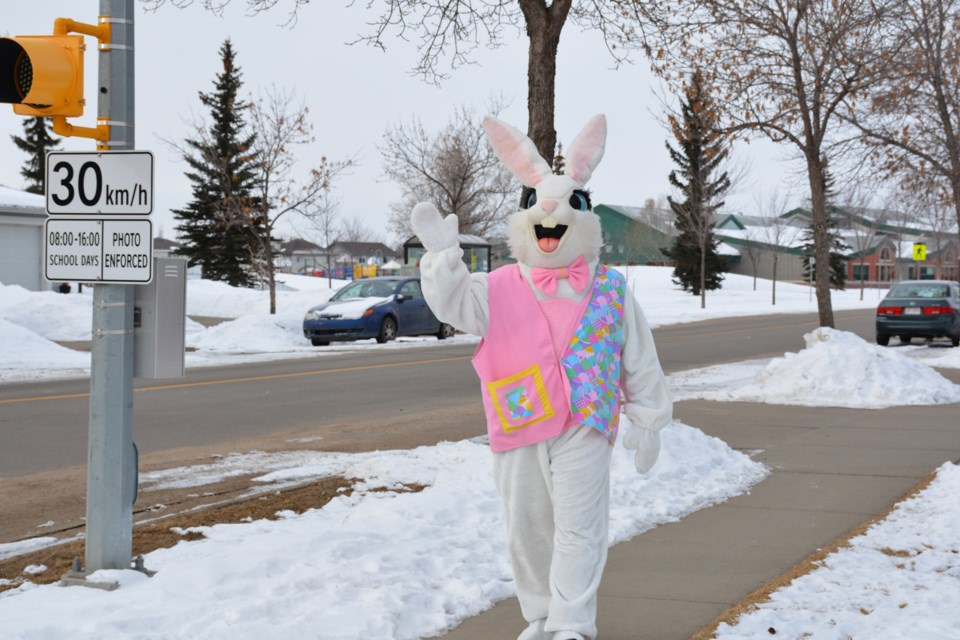 The Easter Bunny paid an early visit to Deer Ridge on Sunday, waving to passersby and bringing cheer on an otherwise frosty early spring morning. Mark Kay (the man inside the outfit that was donated by Karrie's Kostumes) was asking for donations to Stop Abuse in Families through www.canadahelps.org. The festive anthropomorphized creature has a series of other walks through St. Albert neighbourhoods throughout the week. A schedule was posted to the Community of St. Albert Facebook page. SCOTT HAYES/Photo

Volunteering in all of its many faces and facets makes the world go ‘round. It also works wonders to keep a sense of stability and normalcy even when that world finds itself experiencing strange times such as the one we now find ourselves.

St. Albert is a city well known for its volunteers. True to form, its citizens have seen a growing need for help from its most vulnerable members and they have risen to the challenge of meeting those needs with grace, joy and humour.

“I would say that this community is amazing. People really stepped up. Not only are they looking for the traditional ways to volunteer but they're making their own ways as well and reaching out to their community,” said Dawn McVittie, marketing and communications with the Community Information and Volunteer Centre.

As the global pandemic has altered the metaphorical landscape for many human endeavours, many typical volunteer activities have needfully slowed down or even temporarily ceased.

There are still many types of volunteering that are considered essential services, and as such there is a corresponding rise in demand for them, especially for activities related to the necessities of life. The St. Albert Food Bank has ramped up its activities due to a growing demand for hampers. Grocery pickup and prescription pickup services have also seen that rise.

Liza Bouchard, the executive director of Drive Happiness, recently put out a help wanted call for more people to sign up as volunteers. A notice on its homepage indicates the organization is in “overdrive” on that front.

“Probably about 50 per cent of our volunteers are 65 or older, and so they actually aren't driving right now for us,” she explained, noting she works with Alberta Health Services and every plan of action goes through that branch of government. “We went from having 100 active volunteers down to probably about 40.”

Drive Happiness had to cancel approximately 1,700 scheduled rides for this month alone though it continues to take clients to critical medical appointments. Right now, the bulk of its business is in delivering goods and in taking its clients tax returns to accountants and the like.

“We're virtually doing anything that they would normally do, but just without them. We're also providing them with some outreach support, what we're calling ‘friendly phone calling’. Some of our drivers that aren't driving right now ... are assisting us with that situation as well.”

She explained there is always a need for more volunteers but the pandemic situation has created a growing demand for its services from other organizations within the same sector. Drive Happiness could always use a few more helping hands, she said.

New volunteers must go through a police record check and provide a three-year driver’s abstract as well. There is a link on its website to get started, or calling the CIVC at 780-459-6666 is always a good place to get connected as well.

McVittie said volunteering doesn’t always need to be an organized effort. People can give freely of their time and talents any way that they see fit, and many examples of this are all around us these days.

She mentioned endless stories that she has heard of people reaching out to help their elderly or isolated neighbours and people doing random acts of kindness around the city. Mark Kay, for instance, has been dressing up as the Easter Bunny (in a costume donated by Karrie's Kostumes, no less) and walking around different neighbourhoods each day this week to boost people’s spirits and lighten their hearts. His efforts are also meant to boost donations for Stop Abuse in Families through www.canadahelps.org.

The Easter Bunny’s walking schedule was posted to the Community of St. Albert's Facebook page.

McVittie also mentioned those people who would otherwise be offering exercise classes through their businesses but have now turned to providing free programs over the internet.

Ryan Morrow is one such fitness instructor who can now be seen and followed along with every day on the web. As the co-owner of Rhino Nutrition and Fitness in west Edmonton (along with his wife Kathryn), children’s lack of exercise during this period of mass physical isolation was a major concern for him. Kids need to stay active even when they can’t go outside much.

He probably heard a voice that said, “This sounds like a job for Superman!” in his head.

“Everybody's going through the exact same thing. It's not just us that had to shut our doors or worry about money. We still care about people. That's just what we've always done. We're not the kind of people that would want to sit around and do nothing. We'd rather try to help as many people as we can because that's what we do,” he stated.

Rhino had already temporarily shuttered even before the government ordered gyms to do so. At the same time, it started offering Facebook Live video workouts for its adult clientele, many of whom are parents, many of which are also trying to work from home as per the new normal.

Their kids were at home too, and desperate for fun things to do. He came up with a ‘super’ idea to solve the problem, one which required him to dress a little differently.

ZoomBamPow features Morrow in different superhero costumes each day as he leads kids (from toddler age to 12 years) through free and fun workouts straight from a room in his own house, one that has been suitably redecorated for maximum effect. His early sessions saw upwards of 30 attendees a few times a week. Now a daily event, his ZoomBamPow workouts burst at the seams with 75 or more.

“This is a really good thing. Kids love it.”

He also offers a storytime – make that a Super Story Time – for the quieter moments.

The CIVC provides an online live community calendar that features the Kids’ Superhero Workout along with numerous other free craft, exercise and yoga classes for young and old alike.