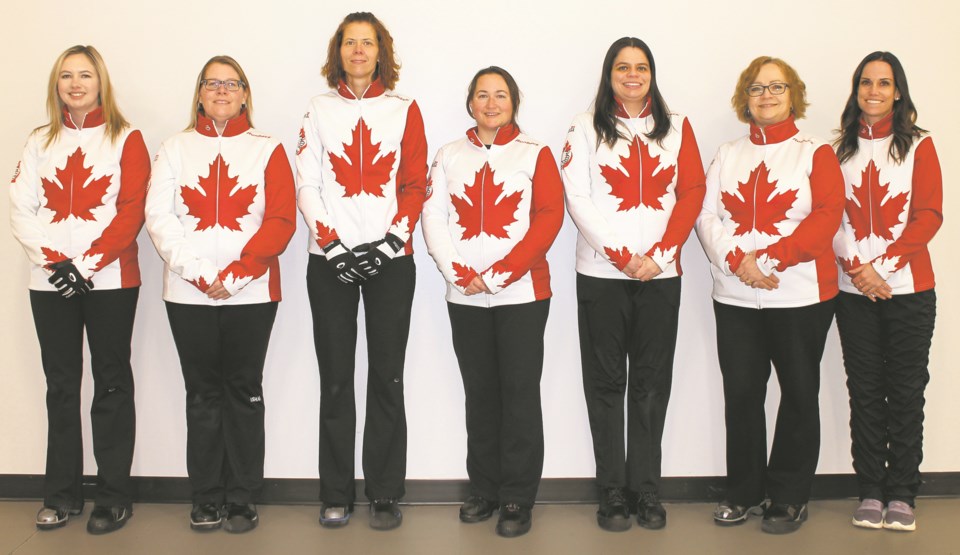 The difference between playing for a medal and finishing fifth for Team Canada in women’s curling was a matter of inches at the 19th Winter Deaflympics in Madesimo, Italy.

Canada, Russia and Croatia finished the seven-team round robin tied at 3-3, but the results in the last draw Dec. 18 determined Canada’s fate.

“Russia played Korea and if Russia won we go into the semifinals, but Russia lost (8-7 on last shot) by sweeping heavy draw weight (so) the Canada team got kicked (out of) the semifinals by one and a half inches,” said Nyla Kurylowich, a local curler and the second for Canada, in an email. “Fifth place is not what we wanted, but it happened."

A win against China to close out the round robin would’ve guaranteed Canada a semifinal berth. However, China counted a deuce with the hammer in the first end and stole singles in two and three before Canada got on the board with one in four. A steal of two in six made it 7-1 and a three-spot in eight ended the contest with China on top 10-2.

“Nerves got to everyone,” said coach Taina Smiley in an email. “We knew we would be in the playoffs if we won and we certainly had enough talent on the team if they had played their best. Unfortunately for us, we lost and Korea beat Russia in the last draw as well.

“We were very disappointed in the results, but it takes nothing away from the amazing experience.”

“China and Russia were certainly the top contenders in the field. They are young athletes and from what we understand fully funded for training. They also receive huge monetary bonuses for medalling in this event, the same money as their country’s Olympic athletes, With those incentives there are more deaf athletes competing within the country to go to the Deaflympics which raises the level of play for the sport,” said Smiley, the St. Albert Curling Club’s assistant manager.

Canada was skipped by Holly Jamieson of Fort Saskatchewan and a familiar face along with Kurylowich on the St. Albert curling scene.

Jamieson, 25, was the second on the 2015 world junior championship rink skipped by Kelsey Rocque in Tallinn, Estonia.

Sally Korol of Edmonton was the third and a pair of Winnipeg curlers, lead Susanne Beriault and fifth Sherry Clark, joined the trio that won the 2018 Canada Deaf Games in Winnipeg with Andrea Scott as the lead for Team Alberta.

Beriault, 40, was the Team Manitoba skip and Clark was her lead in the final, a 7-4 loss in nine ends to Jamieson.

Clark, 38, also served as a fifth with the gold medallists at the 2007 Deaflympics in Salt Lake City, Utah, with Korol as a teammate and the 2009 World Deaf Championships in Winnipeg with Korol and Kurylowich on the team.

Korol, 38, curled in her sixth international event and the fifth medal was silver at the 2013 World Deaf Curling Championships in Bern, Switzerland with Kurylowich, skip Judy Robertson, lead Lynda Taylor and Diana Backer of St. Albert as coach as Canada lost 9-7 to Russia.

Angie Turnbull of Edmonton was also the team's interpreter at this year’s Deaflympics, an International Olympic Committee sanctioned event for deaf athletes and unlike the athletes in other IOC sanctioned events, the Deaflympians can’t be guided by sounds.

Curling was one of six sports at the Deaflympics, which follows World Curling Federation rules.

At the 2017 World Deaf Curling Championships in Sochi, Russia, Jamieson skipped the Canadian rink of Korol, Kurylowich and Scott, with Smiley as coach, to a bronze-medal victory against Hungary after losing to China in the semifinals. A junior-like China lineup beat Russia for gold.

“Curling countries have improved a lot (and) getting stronger and younger. I’m impressed at how countries improve a lot, but they get a lot of funding and play curling fulltime, especially China and Russia,” said Kurylowich, 44. “(The) Canada team will have to train harder to beat China and Russia.”

Jamieson, 25, noticed at the pre-event practice, “the calibre of the competition increased. The teams on the women’s side all seemed relatively equal and could’ve gone in any direction. Obviously, we fell short and didn’t get the luck of the draw,” Jamieson said in an email.

Canada got off to somewhat of a rocky start in its opening game with the 6-5 loss to Croatia. A deuce in eight and a steal of one in nine gave the Canadians the lead at 5-3 before Croatia scored three in 10 for the win.

“The Croatia game was the one that just wouldn’t go our way. We couldn’t find our draw weight early in the game and the other team seemed to get the lucky rolls to the perfect spots,” Smiley said.

After the 9-3 loss to Russia (five points were scored off steals in three ends for Russia), Canada strung together victories of 14-5 against Korea, 7-4 against Hungary (2-4) and 11-6 against Ukraine (1-5) before falling short to China.

“Personally, I struggled a lot and it showed in our games,” said Jamieson, who was balancing “school stress” with exam finals at the Deaflympics and wasn’t allowed to wear her hearing aids at the event (she was diagnosed with severe bilateral hearing loss at an early age).

“Obviously, I wish we could’ve gotten our first game against Croatia back. As a team, we were learning the ice conditions and the environment and we didn’t give them our best game,” Jamieson said. “By the third game, when our winning streak started, we all found our groove. The hardest part was not the number of games, but the amount of waiting between games. After our first slow start, we had to sit for two days and then play Russia. That was hard to get back into competition mode. All the games were at 2 p.m., which seems ideal, yet it became a mental and logistical challenge for us. We rise early to eat breakfast at 7 a.m. and then have to find ways to occupy ourselves while conserving energy for our upcoming game.”

The curling venue in Madesimo, a small ski resort of about 600 people, “was beautiful, yet cold. I played in a toque for the duration of the competition,” Jamieson said.

Kurylowich described Madesimo as a friendly town, “with beautiful Italy culture and food and wines,” while adding: “The people who live there were cheering for all the countries. The school in Madesimo even sent little students to watch curling games. It was a great experience.”

Among the positives for Canadians at the Deaflympics were, “bonding as a team, meeting and making friendships with other competitors and memories to last a lifetime,” Jamieson said.