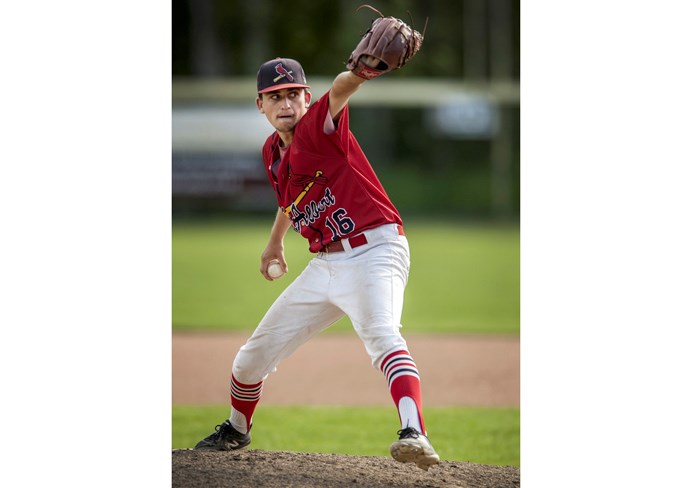 EYEBALLING IT – Brady Kobitowich has his eyes on the target while delivering a pitch for the St. Albert Cardinals in the Norwest 18U AAA Baseball League. The Cardinals (27-8) finished second behind the Parkland Twins (29-5) in league play. The Baseball Alberta Tier I tournament is underway this weekend in Sherwood Park for the Cardinals, last year's provincial champions and fourth-place team at nationals. DAN RIEDLHUBER/St. Albert Gazette

The St. Albert Cardinals are going great guns as the defending provincial champions.

The winners of 27 of 35 games in the Norwest 18U AAA Baseball League are locked and loaded for a repeat performance at the Tier I tournament this weekend at Sherwood Park.

“I really like where we’re at this stage in the year. As other teams are maybe faltering a little bit we’re picking up steam,” head coach Cam Houston told the Gazette at Wednesday’s practice at Legion Memorial Park.

“This group does a lot of little things well,” Houston added. “Our pitchers have been throwing really well the last month and definitely offensively we can spark big innings very quickly. We've got a lot of guys and a lot of older leaders on the team like Mike Brisson that spark this offence.”

At provincials, the Cardinals are slotted in pool B with the Calgary Bandits, Red Deer Braves and Calgary Cubs and pool A consists of the Parkland Twins, Sherwood Park Athletics, South Jasper Place Jays and the Tier II provincial champion Northern Lights of Grande Prairie.

Pool play started Friday and the score between the Cardinals and Red Deer was unavailable at press time.

Today at Strathcona Athletic Park, the Cardinals play the Cubs at noon and the Bandits at 6 p.m.

If there are no tiebreakers Sunday, the crossover semifinals are 9 a.m. and noon, and the final is 3 p.m. at Centennial Park.

The winner goes to nationals at London, Ont., and the runner-up heads to westerns at Red Deer and the tournament dates are Aug. 15 to 18.

“We’re going to show up and try and win it again and go back to back,” said pitcher Brady Kobitowich, one of 10 returning players from the last year’s 44-18 Cardinals as the first St. Albert Minor Baseball Association 18U AAA team to represent Alberta at nationals since the 2014 silver medallists at the Baseball Canada championship.

“Everyone is pretty calm because everyone knows the routine and what to expect as defending champions,” said pitcher/centrefielder Tyson Kowaluk. “We know we have a big target on our back because everyone wants to beat us.”

The roster is loaded with provincial championship players with the 2014 13U AAA, 2016 15U AAA and last year’s 18U AAA Cardinals, and all three teams finished fourth at nationals.

“A lot of us have been there before and that’s why we love playing in provincials,” said Kobitowich of the group of tight-knit Cardinals “that have pretty much been together on the same team for the past eight years.”

As good as the Cardinals are, they can ill afford to take any team lightly.

“At provincials it’s anyone’s game. It’s like playoffs in any sport. Anybody can beat anybody, it’s just whoever brings their A game is going to win the game and tournament,” Kowaluk said.

There are very few wrinkles for the Cardinals to iron out in their game.

“Once one thing clicks they all start to come along and when one thing is down you rely on one thing to keep the rest of the game strong,” said Kowaluk, noting “our fielding has been pretty strong” as the team’s consistent strength throughout the season.

“We’ve been kind of rolling lately. We had one tough game but we’ll kick back,” said Kobitowich, the starter with four earned runs and five strikeouts in three innings in the 6-5 setback to the fourth-place Athletics (16-17) last Saturday in Sherwood Park to close out the Norwest schedule.

The season series against Parkland saw the Cardinals lose the first three games before winning the last two.

“We’ve had pretty good games all year. It’s a good rivalry and it’s always been that way with us and Parkland,” said Houston of the seminal pairings in the last two provincials at St. Albert, with Parkland beating the Cardinals 6-1 in the 2017 playoff en route to winning the final and last year the Cardinals turned the tables with the 6-1 decision.

“They’ve got good depth on the mound and they’ve got some scrappy players, but I like what our guys do a little bit more and, if comes down to it, we'll be ready to go against those guys in a big game,” Houston said.

The teams faced-off four times in July, with Parkland coming out on top 1-0 and 4-3 before the Cardinals prevailed 4-1 and 3-1.

“They’ve got a couple of arms, they’ve got really strong hitters at the top of their lineup and they’ve got some home run hitters,” Kobitowich said. “Every time we’ve played them we’ve pitched it and they’ve kind of pitched it as well, but lately we’ve been hitting off them so we’ve got a good chance at beating them.”

Kobitowich, 17, gave up the only run in the 1-0 July 11 match in the sixth inning in relief of Ryan Marples and in the 4-1 win July 14 went the distance with seven strikeouts and two walks while allowing seven hits.

A reliable curveball is the main pitch for the one of the top throwers in the Cardinals' starting rotation.

“It's all about getting ahead (in the count) and keeping hitter off balance. I can kind of blow it by them a little bit too,” said the Bellerose Composite High School graduate.

The last game against Parkland was Kowaluk’s no-hitter July 18 as the 17-year-old southpaw fanned four, walked four and hit two batters, and his 93 pitch count was 42 balls and 51 strikes.

A fielding error in the fifth led to the unearned run.

The last out to complete the no-hitter was a strikeout on a curveball against the 25th batter of the game.

“You don’t really try and think about (no hitter) too much, you want to just think of doing your job out there but, when it came down to the last batter, I was thinking 'Oh, this is the last guy,'” said Kowaluk, a Grade 12 Bellerose student and smooth-skating defenceman with the St. Albert Raiders, the 2019 Mac’s Cup champions and Alberta Midget AAA Hockey League provincial finalists.

There is also extra incentive for the Cardinals to go as far as possible with Houston stepping down at season’s send.

“We want to win it for him. We’ve had him forever. We love him. He’s my favourite coach and I know that it’s the same thing with the other guys,” Kobitowich said. "He cares about everybody. He wants the best for everybody. He may be hard on us sometimes but it's all for getting us better.”

Houston, 39, is looking forward to life outside of baseball.

“It’s time to look for something a little different. I’ve been doing this for a long time. My wife (Dana) and I want to do some travelling so I want take some time out from baseball,” said the director of baseball operations for the Prospects Baseball Academy year-round program, who has tutored a very long list of current and former SAMBA players. “It’s a very tough decision. There are lot of good people involved here and a lot of great kids that I’ve got to see grow into men.

“With this group we're looking for that one last hurrah and see if we can win the whole thing.”

Houston’s tenure with the Cardinals rivals the Gord Gerlach-coached teams during the Big Red Machine era for championship-winning seasons.

As the 2014 national silver medallists, the Cardinals were the first 18U SAMBA team to advance to nationals since 2008 and the first to medal since the 2004 nationals as the host team.

The Cardinals were also the 2015 silver medallists at westerns.

As for the signature moment with the Cardinals, “The silver medal at nationals was awesome, it was an unbelievable run and experience, but every championship here has been special. The one last year was great because a lot of senior guys that have been together for a long time got to experience winning it,” Houston said.

“But it’s really all about the people that you come across like Kurtus (Millar, the SAMBA president) and the Bourassas and the Moffats, who do a lot of work for this organization, and lot of the guys that come through here and had success down the road and to see what they do in college and come back and give back that’s probably the best part about it."

SAMBA plans to retire Houston’s No. 32 Cardinals’ jersey and hang it on the wall of fame inside the new Millar Field House after the season.