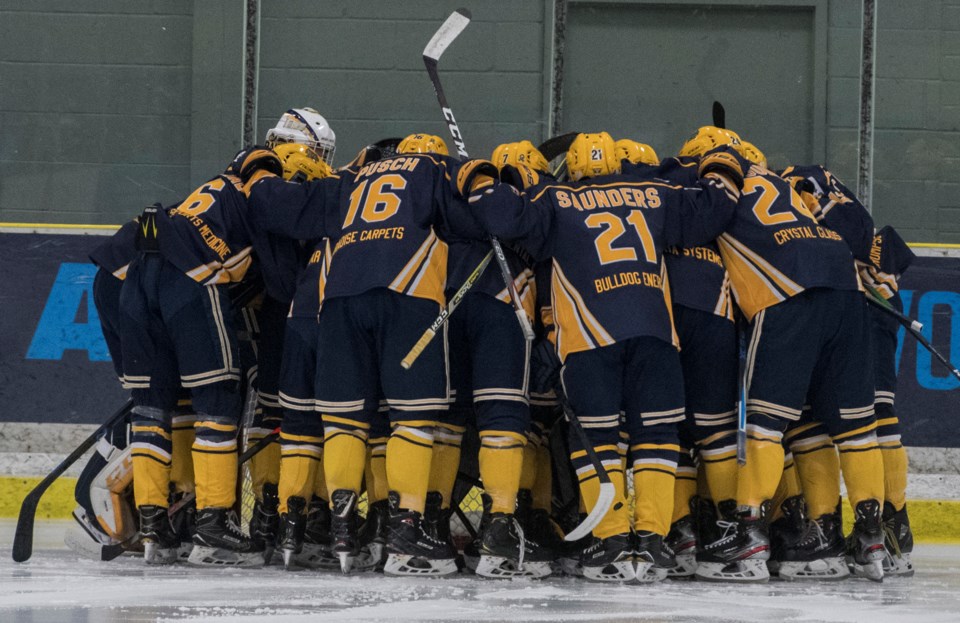 UNITED IN VICTORY – The St. Albert Nektar Raiders huddle up as the No. 1 team in the Alberta Midget AAA Hockey League playoffs after going 27-1-4 in the regular season. The best-of-five north division semifinal against the Canadian Athletic Club started Thursday with the Raiders winning 5-4 at Jarome Iginla Arena. Game two goes today at 5 p.m. at Bill Hunter Arena and game three is 6:45 p.m. Monday in St. Albert. JOHN LUCAS/St. Albert Gazette

“When we won the first game (of the season) I thought we were an amazing team and then we just started rolling as a unit and then we kept winning more games and more games,” said Pusch, the leading goal scorer on the 27-1-4 Raiders with 16.

The No. 1 team in the Alberta Midget AAA Hockey League continued its winning ways in Thursday’s playoff opener against the Canadian Athletic Club.

Despite an 11-day layoff, Raiders outshot the Canadians 46-23 in the 5-4 decision at Jarome Iginla Arena.

“It starts right off the puck drop. We’ve got to come out and play hard just like we did all season,” said defenceman Tye Pedersen of the Raiders going all out after a first-round bye as the north division pennant winners for the second year in a row.

“It’s a new season. Playoffs are a whole new dimension for players and teams. It’s a war,” Pedersen said. “We’ve got to live up to what we are and keep doing what we’ve been doing.”

On the eve of the best-of-five north semifinal, the Raiders were anxious to pile up the wins again.

“We’ve got some butterflies, but other than that we're really excited to start playing,” Pusch said. “Any team can beat anyone so we’re not coming into this playoff light, we’re going to come strong and be ready.

“We want to come in as hard as we can to win that first one because then we’ll have all the momentum. We’ve got to come out fiery.”

Koehn Ziemmer’s second goal of the night was the winner with 7:06 left in regulation time after the fourth power-play maker by the Canadians knotted it at four two minutes earlier.

The Raiders led 3-2 after the first period as Ziemmer, captain Mathieu Gautier on the power play and Chase Visser potted goals while outshooting the Canadians 19-9.

In the middle frame, Visser made it 4-2 on the power play and the Canadians answered with 5:30 left in the period.

Ziemmer and Breck McKinley collected three points apiece while Pedersen and Baaz Grewal chipped in with two assists each.

The series resumes today at 5 p.m. at Bill Hunter Arena and game three is 6:45 p.m. Monday in St. Albert.

If needed, game four is 7:45 p.m. Wednesday at Bill Hunter Arena and game five is 7 p.m. Thursday in St. Albert.

Last year’s Raiders placed first in the north at 19-11-4 with the league’s fifth-best record and in the playoffs won six and lost five as the AMHL provincial finalists. Five playoff games were decided in overtime and the Raiders lost four of them, including the first two games in the best-of-five final against the Calgary Buffaloes and the series opener was decided on a penalty shot in sudden death.

“The biggest thing for us this year is just staying calm, staying poised with the puck and taking it shift by shift as we try to get where we want to go this year,” said Pedersen of the ultimate goal of competing at the Telus Cup in April at Saint-Hyacinthe, Que.

“Honestly, I don’t think the pressure is on us this year. We’ve got a strong team. We’ve got a 20 man unit that can roll and that’s what we're going to do,” said Pedersen, a returning Raider from the playoff grind and three-game sweep by the Buffaloes along with McKinley on defence, Gautier and Jaxon Dube as forwards and Proctor-Ramirez.

“This year, everyone bought into our system that coach G (Geoff Giacobbo) put in. It's all about being a team and playing as a team. All 20 guys bought into it and it's worked out for us,” said Pedersen, 17.

The Grade 12 St. Albert Catholic High School student skated into the playoffs as the AMHL’s top-scoring defenceman with 25 points in 31 games and McKinley was second with 22 in 30 games.

“It’s been a good year. I got shots on net and that helped a lot in for scoring opportunities for our players,” said Pedersen of his five goals and 20 assists. "I tried to work on D zone first this year and I wanted to strengthen that. The D zone always leads to O zone so if you can perform in the D zone it just transitions into your O zone game and that’s what kind of happened for me.”

Gautier led the Raiders in points with 32, followed by Dube and Evan Forrest with 27 apiece.

Pusch lit the lamp 16 times for the Raiders and Ziemmer was second in goals with 15.

Pusch, a left winger with a rugby player’s demeanour, wound up with 25 points while thriving on a line with Gautier and Kyle Norman (nine goals and 20 points), the leading scorer in the NAMHL last season (25-23-48 in 32 games) with the midget AA PAC Saints.

“They’re just amazing to have on my line. I work really well with them in the offensive zone and D zone getting pucks out, getting pucks deep and attacking,” said Pusch, 17, a Grade 12 Bellerose Composite High School student and last year’s leading NAMHL playoff scorer with 12 goals and 22 points in 11 games for the Crusaders after posting 16 goals and 38 points in 22 games in league play.