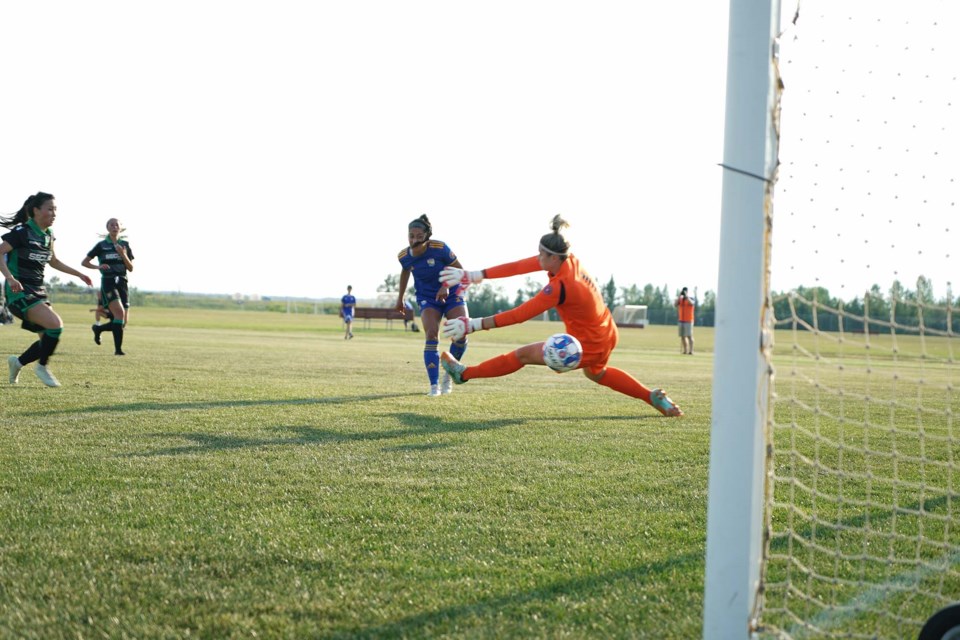 Soccer fans in St. Albert had plenty to cheer about Friday. The St. Albert Impact came up victorious in their United Women's Soccer (UWS) debut with a 1-0 victory over the Calgary Foothills FC at Riel recreation park. Bryana Buttar got the game’s only goal at the 37th minute while keeper Emily Burns was fantastic in the second half.

It was a game filled with nerves and excitement. Residents arrived in droves and surrounded the field to watch their team take their historic first step into the league. People of all ages were there to cheer on the Impact and the players gave them quite an entertaining game.

The first half was owned by the Impact. The roar of the crowd must have inspired them early on as they put on a defensive clinic. Every loose ball seemed to be won by St. Albert and they implemented a quick transition.

There was a moment of hesitation in this half that almost led to a Calgary goal. A rare defensive breakdown saw a Calgary player get a clear shot on net, but an aggressive Burns came and cut down the angle with a superb toe save.

A mere 12 minutes later Sheena Tracey let loose a powerful shot on net that pinged off the crossbar. The ball rebounded right to Buttar who had a point-blank chance on net. The Calgary keeper, Sarah Dilling, attempted to get in front of the shot, but it was no use. Buttar netted the historic first goal in UWS history for the Impact.

The second half tilted toward Calgary’s favour. Foothills was feeling the pressure and threw absolutely everything they could at the St. Albert net. Luckily, a red hot Burns was having none of it. Her positioning and ability to track the ball in a blink of an eye was otherworldly as she put on an absolute clinic to keep the Impact ahead.

A late last push by Calgary pushed the Impact to their limit, but they hung on for the win. The Impact moved to 1-0-0 on the season and put on quite the show in front of a boisterous crowd.

Head coach and general manager, Troye Flannery, said the lead-up to the game was filled emotion, and that he was proud of how his team played.

“We have to manage emotions in situations like our inaugural performance and I thought we did a pretty good job of that in the first half,” said Flannery. “Overall, super proud of this group of women and super proud of our club to put this together.”

He had high praise for Burns in the Impact net. She was the MVP of the game and helped St. Albert weather a second-half push by Calgary.

“She is absolutely exceptional, she was an all-star with Foothills and she’ll be an all-star here,” said Flannery. “She’s coming off a pro career in Spain, she’s exceptional ... as a shot stopper there (are) not many better (than Burns).”

Burns also had plenty to say. The game started off quietly for her in the first half and she said it wasn’t that tough to get into the game when shots started coming in the second half.

“I think a huge part of the game is being switched on from minute one to minute 90,” said Burns. “I’ve done a lot of work on myself to get to this point and obviously I’m still learning and growing, but it’s just trying to stay dialled in for the whole 90 minutes.”

It was a game that held a lot of significance for Burns. She is from the area and to get the win in such a historic match was special to her.

“It felt really good to be out there,” said Burns. “I’m really proud of the team. The first game of our club in this league is a big deal and I’m super proud to be a part of it and to play in my own city is huge.”

The Impact will look for a two-game sweep of Calgary Foothills when they meet again on July 11. The game will be played in Calgary at Shouldice Park.