Mother 'still in shock, still numb' over loss of son

The mother of St. Albert hockey player Logan Hunter is slowly coming to grips with the death of her son in the tragic Humboldt Broncos bus crash. “I think I’m still in shock, still numb.
Apr 9, 2018 9:33 AM By: Jeff Hansen 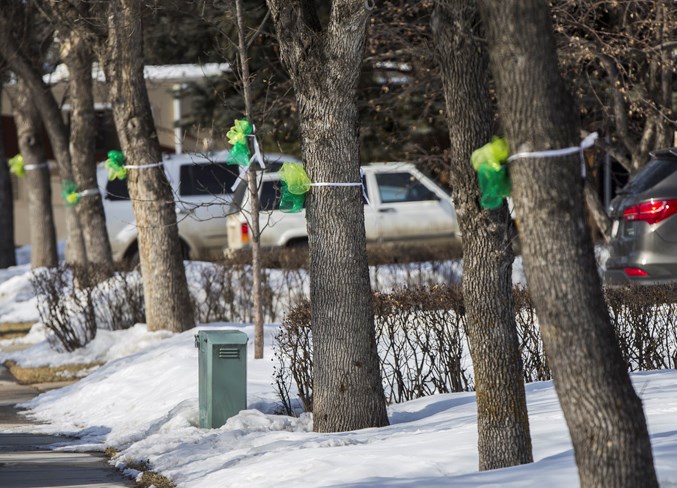 HUMBOLDT STRONG - Green and yellow ribbons – the same colours as the Humboldt Broncos – line the street along Lorraine Crescent in St. Albert where Logan Hunter lived with his family. Hunter, Stephen Wack, Jaxon Joseph and Conner Luken are St. Albert Raiders Hockey Club alumni killed in Friday's crash between the team bus and a semi-trailer unit. They were among 15 fatalities in the collision near Tisdale.

The mother of St. Albert hockey player Logan Hunter is slowly coming to grips with the death of her son in the tragic Humboldt Broncos bus crash.

“I think I’m still in shock, still numb. I’m just thinking he's in Humboldt playing hockey and I’m driving to watch him play,” Shauna Nordstorm told the Gazette prior to Sunday’s vigil in Humboldt to remember the 15 lives lost in the collision between the team bus and a semi-trailer unit Friday.

“Has it sunk in? No. It sure hasn’t sunk in yet that's for sure but I’m reaching out to my friends and my family, Logan’s older sisters' Shaye and Shelby. We will be together and we will get though this together somehow.”

Hunter, 18, Stephen Wack, Jaxon Joseph and Conner Luken,  all alumni of the St. Albert Raiders Hockey Club, were among the 10 players killed.

The Broncos were en route to Nipawin for game five in the Saskatchewan Junior Hockey League playoff series.

Nordstrom was in St. Albert when her son’s billet called with news about the crash near Tisdale.

“We were waiting to try and get some news of what had happened in this accident and a couple of his dear friends came over and they wanted to be with me and we kept praying in a huge circle that he was going to be OK, that he was going to be in one of those small hospitals or had been airlifted to Saskatoon because we knew the Stars Ambulance had been on the site,” Nordstrom said.

“We just hung on to each other, we prayed as hard as we could, and the clock kept ticking and no news was coming our way so a group of my friends drove with me to Saskatchewan and Logan's older sisters came along with their step brother. We had to get to the Royal University Hospital (in Saskatoon) as fast as we could but unfortunately when we arrived we were given the terrible news that Logan had been one of the deceased men in that bus.

“And from that moment on the community of Humboldt and the families of the players were just all trying to support each other and rally around each other. The billet family that Logan lived with, the Cannon family, they’ve been so strong for myself and for the rest of the parents with the kids they had. It’s just been overwhelming,”

Xavier Labelle, 18, of Saskatoon and Adam Herold, 16, of Montmartre, Sask., were Hunter’s teammates billeted with the Cannons. Herold was killed and Labelle was initially identified as one of the fatalities in the crash but is alive. The misidentification through the office of the chief coroner revealed that Parker Tobin, 18, of Stony Plain is now among the deceased.

The St. Albert hockey community has also opened their arms to embrace the families and friends of the four Raiders Hockey Club players. The Raiders’ dressing room at Akinsdale Arena was open Sunday afternoon as a gathering point in the grieving process.

“Knowing what happened there today with the Raiders’ dressing room just shows me how the St. Albert community is amazing. I’ve had so many people call me and text me and offer to do anything I need. People that don't even know me that well are reaching out,” Nordstrom said. “Logan has a huge circle of friends and they’re all reaching out to me. There are two car loads of Logan’s friends that are coming tonight to Humboldt to be part of the candlelight vigil and that just shows me how he'll live on in everyone's hearts.”

“Logan was always the funniest, happiest guy. He always had a smile on his face,” said Sam Smith-Ackerl, Hunter’s teammate on the Blues and Raiders. “He was the best outdoor rink player you will ever see.”

“He was wearing his St. Alberta Sports Academy sweatshirt when I seen him yesterday and I just thought about all the great life lessons he learned because of the game and there were so many people that directed him down that path, especially Geoff Giacobbo in St. Albert and all his other hockey coaches too. Taylor Fraser was one. He had Tom Curr as well. He had Jack Redlick with the midget AAA (Raiders). He was guided down a wonderful path with a bunch of wonderful coaches,” Nordstrom said. “He just loved everything about sports. Sports was his passion. He was an avid golfer and he was so excited to come back and play ball hockey with his friends. They were going to make a run to get to Western Canadians and he was just so pumped about it.”

Among the memories Nordstrom clings to was some mother/son bonding during a pair of playoff games recently in Humboldt.

“We spent some time together and I’m just so thankful for that time. I guess it’s one of the things that when I think about it it gives me the strength to deal with what I have to deal with, remembering those times to try and get through this very difficult, this very truly unimaginable time right now.”