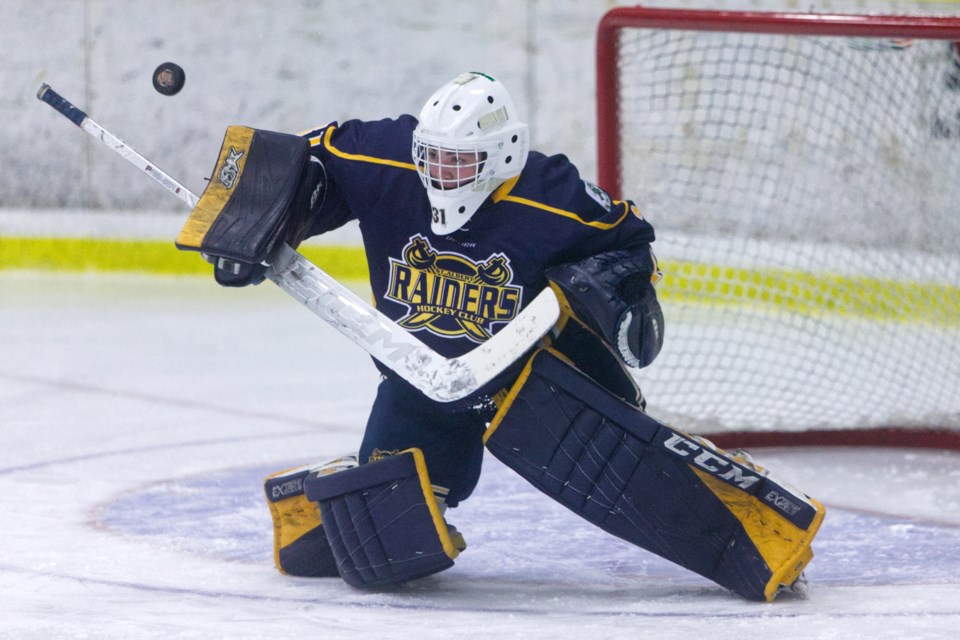 BLOCKER – Carson Ironside stops a shot for the St. Albert Nektar Raiders in the Alberta Midget AAA Hockey League. The Raiders (8-0-2) are winners of four in a row as Ironside turned aside 24 shots for his first shutout of the season and the team's second in Sunday's 4-0 decision against the Lloydminster Bobcats (6-4) in the Border City. Tonight at 7:45 p.m. the Raiders host the Sherwood Park Kings (2-4-3) at Jarome Iginla Arena. CHRIS COLBOURNE/St. Albert Gazette

The Raiders (8-0-2) are the top AMHL team as the north division leaders and the Kings (2-4-3) are seventh in the nine-team north standings.

The fourth win a row for the Raiders was Sunday’s 4-0 decision against the Lloydminster Bobcats (6-4) in the Border City.

The Raiders broke the game open in the middle frame with three goals on 25 shots.

Drew Kuzma struck twice on the power play with Tye Pedersen and Mathieu Gautier assisting on both goals.

Matthew Reidy and Jaxon Dube also scored as the Raiders finished with 36 shots.

The Raiders started off the weekend with Saturday’s 5-1 result against the Okotoks Oilers (6-3) while improving to 5-0 on home ice.

The difference was four power-play markers – two by Pedersen and one each by Reidy and Koehn Ziemmer.

The Sturgeon Spirits make their provincial debut in Saturday’s Tier III north semifinal against the host Whitecourt Cats at 1 p.m.

The winner travels to play the No. 2 Sylvan Lake Lakers (8-0) or the No. 4 Holy Rosary Raiders (7-3) of Lloydminster next Saturday for a berth in the Alberta Bowl championship Nov. 23 at Raymond.

Sturgeon’s last game was the 29-14 loss to the Leduc Tigers in the division two Miles conference semifinal in the metro Edmonton league.

Whitecourt is coming off a 43-13 setback to the St. Joseph Celtics (9-2) of Grande Prairie in the Mighty Peace league semifinal.

This is the second year for the football program at Sturgeon Composite High School after going 5-2 as the 2018 division three Gilfillan conference finalists.