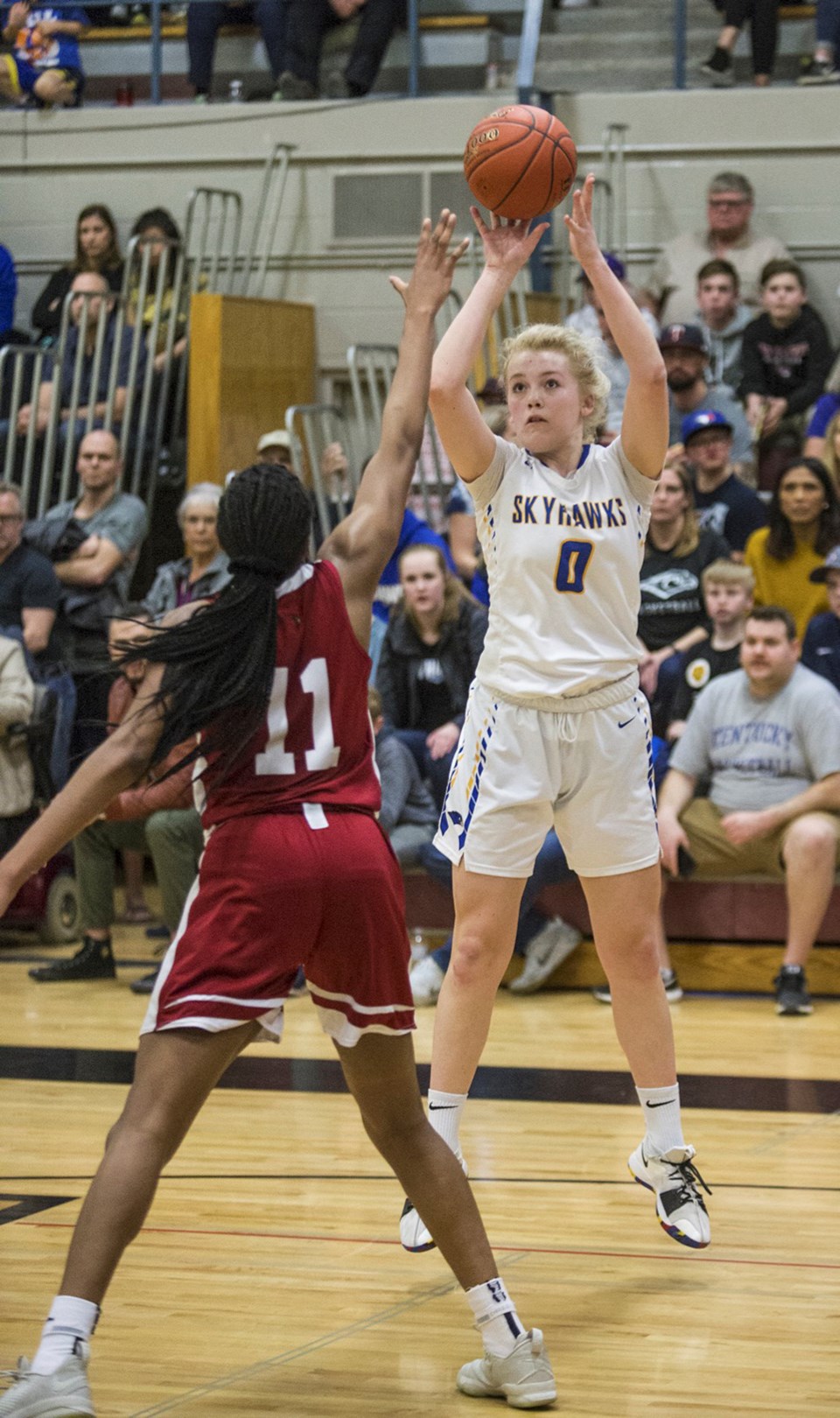 SHOT MAKER – Teá DeMong of the St. Albert Skyhawks shoots a jumper against Yvonne Ejim of the Bishop Carroll Cardinals of Calgary in the 4A provincial high school final March 16 at Jasper Place. The Skyhawks won 66-65 as Mimi Sigue drained two free throws with 25.4 seconds remaining for the game winning points. DeMong and Sigue are among eight returnees from the 30-5 team that ended last season with 22 consecutive wins. The Skyhawks were also 13-0 as the repeat winners of the metro Edmonton division one title. The season-opening tournament for the Skyhawks is the 22nd annual Mike Dea Classic at St. Francis Xavier High School Sports Centre and the first game is 4:30 p.m. Thursday against the Pigeon Lake Panthers or St. Peter the Apostle Spartans of Spruce Grove.

The opening game for Paul Kane in the 16-team men’s draw is 2:30 p.m. against the Jasper Place Rebels and depending on the result the Blues play the Crescent Heights Cowboys or Ernest Manning Griffins of Calgary at 8:30 p.m. in the quarter-finals or 6:30 p.m. in the consolation bracket.

Paul Kane, with six returnees on ther roster, is also competing in the metro Edmonton ability round for division one status after going 13-1 in league play as the division two finalist and 21-3 overall.

The 12-team women’s draw starts at 10:30 a.m. with Sturgeon versus the Lumsden Angels. A win sends Sturgeon, a metro Edmonton division two team, into the 4:30 p.m. quarter-final against the O’Leary Spartans and a loss puts the Spirits into Friday’s consolation semifinal against Pigeon Lake Panthers or St. Peter the Apostle Spartans of Spruce Grove at 2 p.m.

Next weekend Sturgeon hosts its annual Rise Up tournament with eight women’s and 12 men’s teams and is also the host team for the 3A provincial women’s championship in March.

In the women's draw, Paul Kane and the Skyhawks have byes into the 4:30 p.m. quarter-finals.

Paul Kane hoops it up against the Leduc Tigers or Beaumont Bandits and the winner advances to the 6 p.m. Friday semifinal.

The Skyhawks are up against the Panthers or Spartans for a berth in Friday’s 8 p.m. semifinal.

Paul Kane is returning six players from the sixth-place team at the 2019 4A provincials that finished 20-11 overall, including a 9-3 showing as the metro Edmonton division one semifinalist.

The Skyhawks ended last season with 22 consecutive victories as the 4A provincial champions and winners of back-to-back division one playoff banners. Eight players are back from the 30-5 team that was 13-0 in the metro Edmonton league.