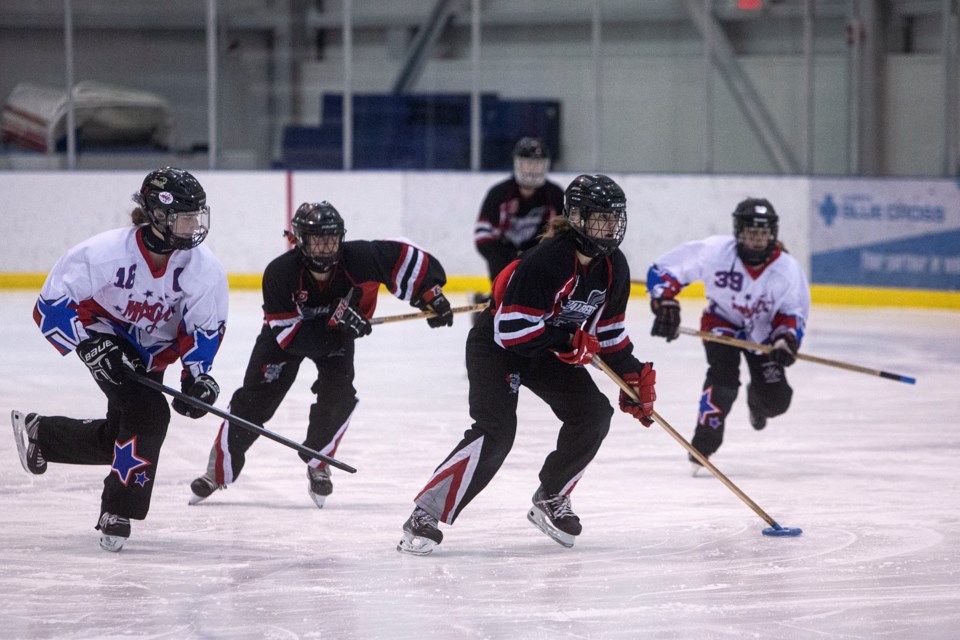 FAST BREAK – Jazzi Fevin of the U16AA St. Albert Mission skates with the ring as Brielle Lajoie follows her teammate during action at the 34th annual Wood Invitational Tournament last month in Edmonton. Tonight at 6 p.m. the Mission plays the U19A St. Albert Strike in the Black Gold League at Riviere Qui Barre. The Mission's overall record is 24-4-2 after going 4-2 as finalists at the Michelle Vandale Memorial Spirit of the Winter Tournament last weekend in Langley, B.C. The U14AA Mission (4-1) were tournament champions and the U19AA Mission (2-3) placed third. CHRIS COLBOURNE/St. Albert Gazette

The U14AA Mission, winners of the Michelle Vandale Memorial Spirit of the Winter Tournament in Langley, B.C., have no games scheduled this weekend.

Sunday’s U14AA final at the Spirit of the Winter was 5-4 in overtime against Calgary Blue (1-3-1) as Andreina Carrero scored the winner in sudden death after Casey Houde tied it at four with 47 seconds left in regulation time.

The Mission also lost 5-4 to the Peak in the round robin and the semifinal was 5-3 against Calgary Tenacity (2-3).

The Mission’s overall record after the tournament is 24-4-2.

The Royals rallied from a 5-1 deficit after 40 minutes as Brett Marlin scored the equalizer on the power play with 61 seconds remaining.

The second of two goals in the third by Aidan Malinowski was potted on the penalty kill with 2:59 to play.

Tyler Fitka also struck on the power play with 7:10 to go.

It was 5-0 when Andrew Despins tallied with 30 seconds left in the middle frame and the Royals on the power play.

Liam Mastervick finished with a pair of assists.