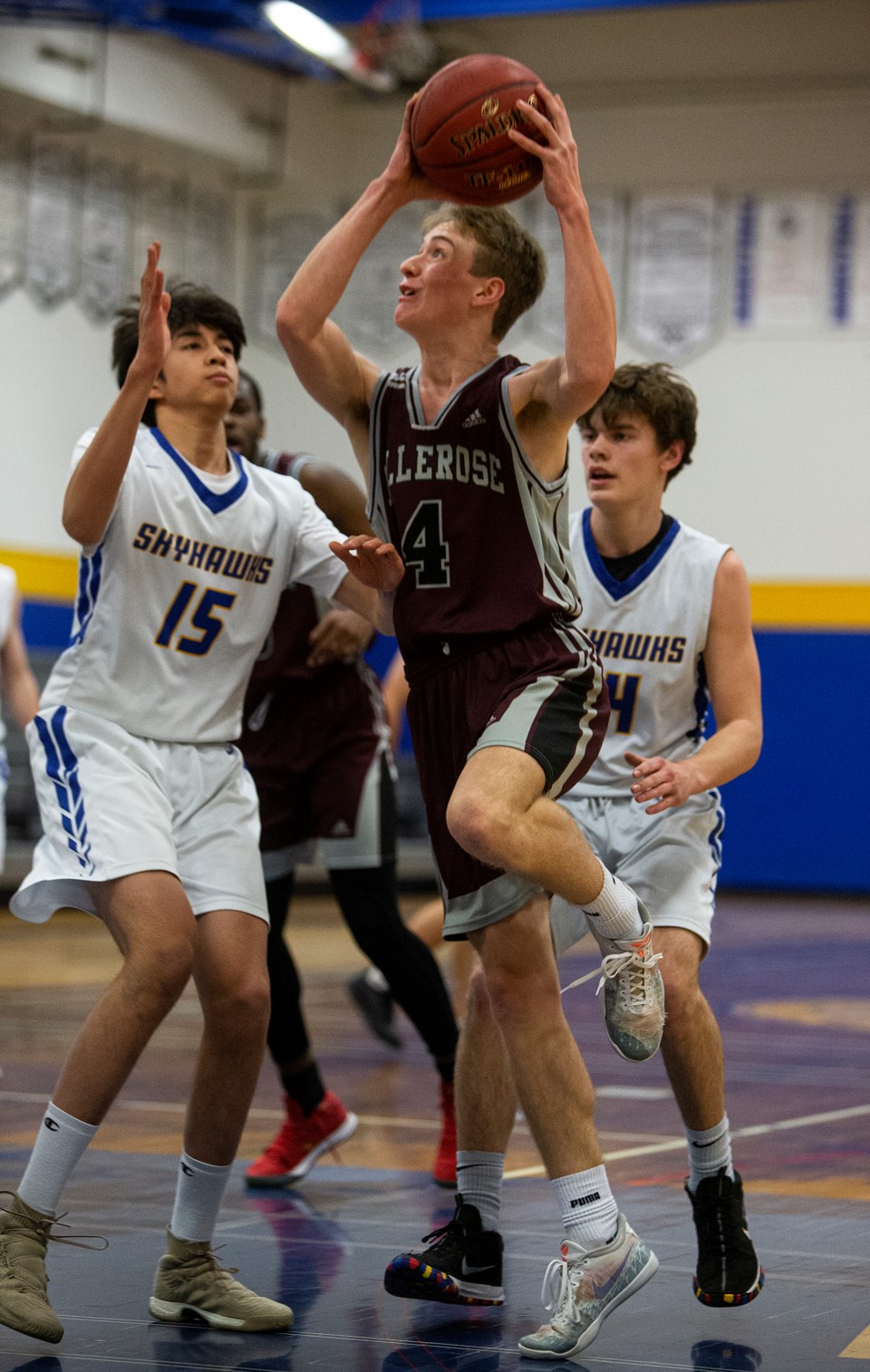 ATTACKING THE HOOP – Josh Warner of the Bellerose Bulldogs has a leg up on Joland Garda, left and Talen Eybergen of the St. Albert Skyhawks in last week's metro Edmonton division two ability round at the SkyDome. The Skyhawks won the blue pool round-robin game 65-62. In division two action Monday 6:30 p.m., the Skyhawks (1-1) host the Strathcona Christian Academy Eagles (1-0) and the Bellerose Bulldogs (0-1) are the visitors against the J. Percy Page Panthers (2-0). CHRIS COLBOURNE/St. Albert Gazette

Start times are 6:30 p.m. for the St. Albert Skyhawks against the Strathcona Christian Academy Eagles (1-0) at the SkyDome, the Bellerose Bulldogs play at the J. Percy Page Panthers (2-0) and the Paul Kane Blues visit the M.E. Lazerte Voyageurs (2-0).

The Skyhawks are 1-1 after Wednesday’s 68-54 win over the Archbishop Jordan Scots (1-1) at Sherwood Park.

The next game for the St. Albert Merchants in the Capital Junior B Hockey League is Sunday at Coronation Arena.

Friday the Merchants (15-9) hosted the Wetaskiwin Icemen (9-12-2) and the score was unavailable at press time.

The third loss in four games for the third-place west division team was 5-1 against the Morinville Jets (7-17) Tuesday at Landrex Arena.

Ryan Conquergood, an affiliate, opened the scoring with 1:20 left in the first and Scott Lancaster tied it with 36 seconds left in the period.

Merchants' starter Mitchell Reidy (four GA on 29 shots) was replaced by Ryan Deets (one GA on five shots), a forward and the team’s emergency back-up netminder, after Reidy (7-5, 3.98 GAA) was tagged with a game misconduct with 8:30 to play.

Reidy was penalized in the middle frame for a slew-foot infraction.

The Merchants close out the December schedule next weekend with home dates against the North Edmonton Red Wings (18-5-1) Friday and Fort Saskatchewan Hawks (11-5-6) Sunday at 8 p.m.