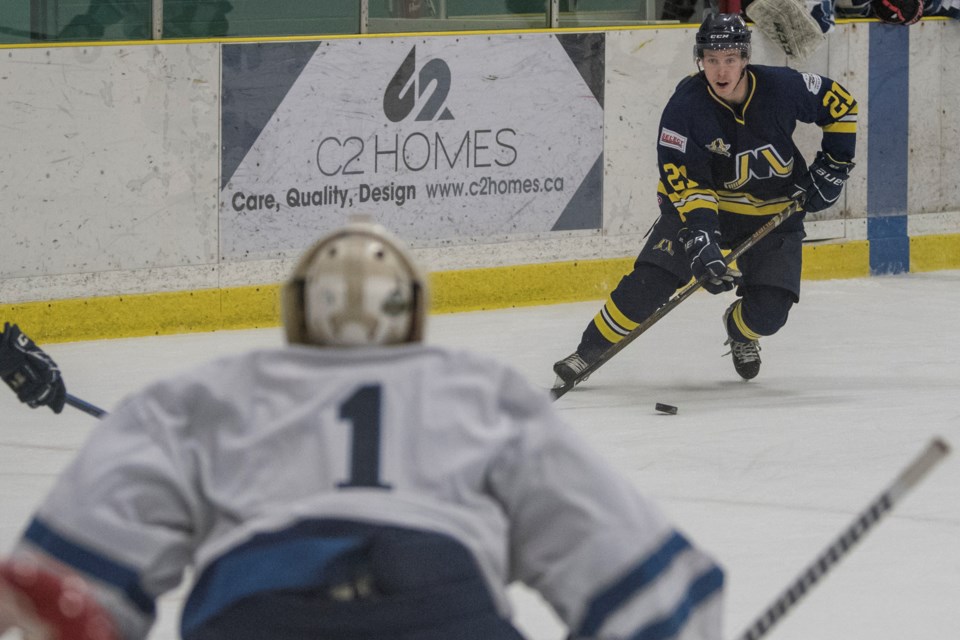 ONE-ON-ONE – Kiegan Millar of the St. Albert Merchants skates in alone against netminder Luke Hall of the Morinville Jets in the Capital Junior B Hockey League. The playoffs start Friday for both teams in the best-of-three west division qualifying round. The Merchants (23-14-1) play the Spruce Grove Regals (5-30-3) at 8 p.m. at Jarome Iginla Arena and the Jets (14-23-1) are the visitors against the Stony Plain Flyers (20-17-1) at 8:30 p.m. at Glenn Hall Centennial Arena. The league playoff schedules are available at cjhl.org. JOHN LUCAS/St. Albert Gazette

The puck drops Friday night for the St. Albert Merchants and Morinville Jets in the Capital Junior B Hockey League playoffs.

Friday’s playoff openers are 8 p.m. for the Merchants at Jarome Iginla Arena and 8:30 p.m. for the Jets at Glenn Hall Centennial Arena.

Game two is 7:45 p.m. Sunday for the Merchants at Grant Fuhr Arena and the Jets at Landrex Arena.

Game three, if needed, is 1 p.m. Monday for the Merchants at St. Albert and 8 p.m. Wednesday for the Jets at Stony Plain.

The Merchants, the CJHL’s fourth-highest penalized team with 26.6 minutes per game, were led offensively by Ryan Cooper’s 27 goals and 58 points in 33 games and Bryce Sturm’s 26 goals and 56 points in 38 games.

Josh Mcrae was the top scorer on the Jets with 29 goals and 54 points in 36 games.

Eight teams are competing for the championship trophy at the Shootout in St. Albert atom AA hockey tournament this weekend at Jarome Iginla Arena.

The Crusaders and Barons are representing the St. Albert Minor Hockey Association.

In pool play, the Crusaders are in action at 12 noon Friday against the KC Icemen and Saturday against the Confederation Vipers at 8:45 a.m. and Trails West at 1:45 p.m.

The tournament also features a skills competition at 5:30 p.m. Saturday.