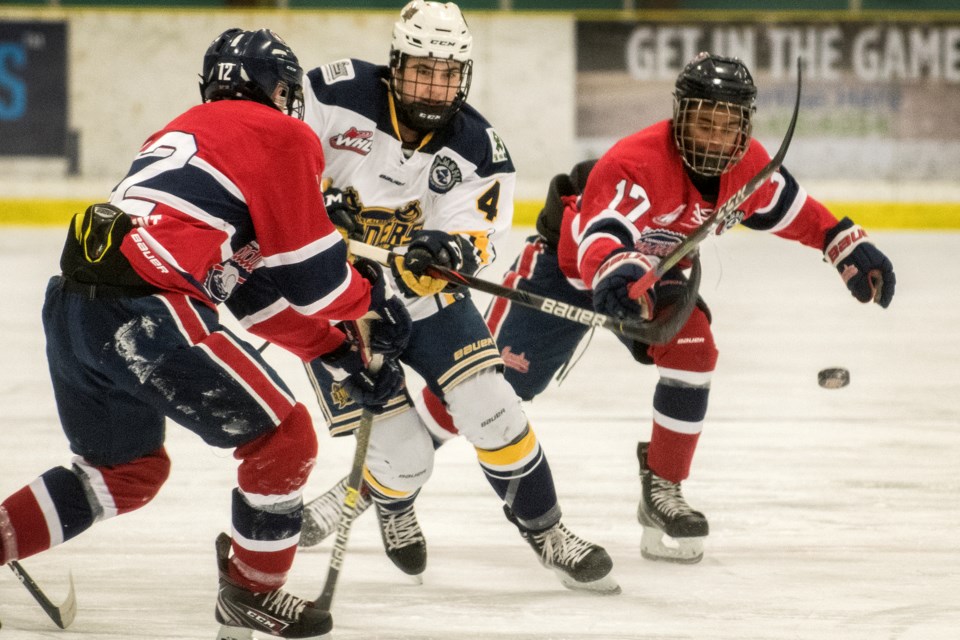 CLOSE ENCOUNTER – Jack Ketsa of the St. Albert Gregg Distributors Sabres is met in the neutral zone by Brady Ness, left, and Ethan Short of the Canadian Athletic Club in Sunday's game at Jarome Iginla Arena. The Sabres (16-3-1), the top team in the Alberta Major Bantam Hockey League, won 4-1. The next contest for the Sabres is on Raiders Day and Saturday's faceoff time is 5:15 p.m. against the Lloydminster Bobcats at Go Auto Arena. DAN RIEDLHUBER/St. Albert Gazette

The goal of Raiders Day is to celebrate hockey in the community along with the history of the Raiders Club in developing not only good hockey players, but good people.

Food bank and toy collection bins will be located outside the seating entrances of all three rinks.

A progressive 50/50 will run throughout the day at every game and the Raiders’ portion will be donated to Special Olympics St. Albert.

The winning number will be announced through raidershockey.ca and social media feeds.

Special Olympics St. Albert athletes will perform the puck drop at one of the AAA games.

Situated on the upper floor is an information booth with a Raiders Club board member available to answer questions, plus a silent auction sports memorabilia table featuring items from past Raiders who have gone onto the National Hockey League.

Fans are also encouraged to dress creatively while rocking their Raiders Pride at the following games: