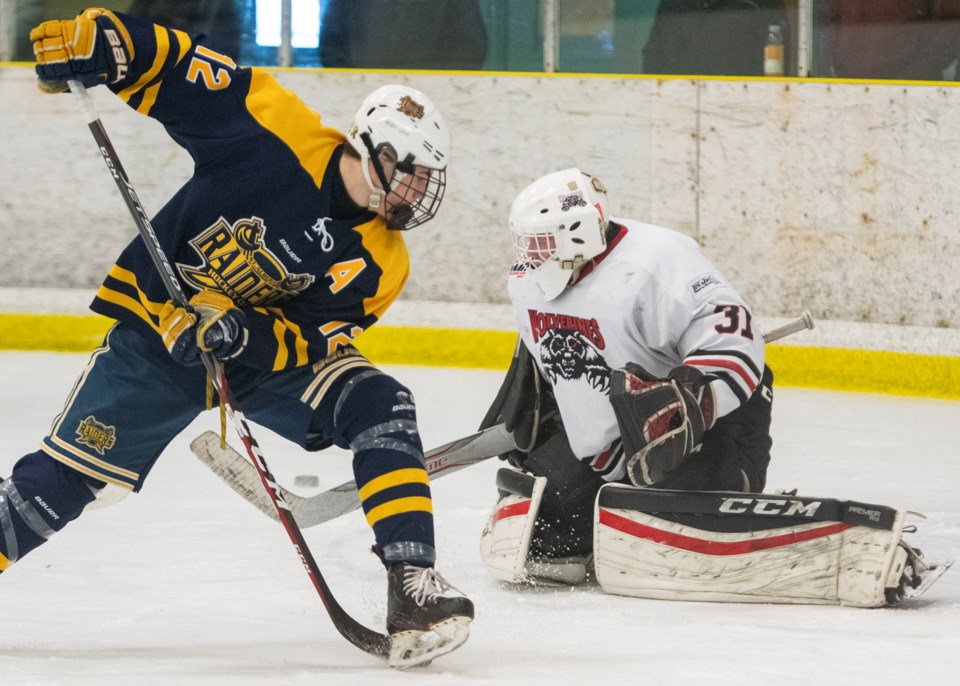 ATTACKER – Hayden Carlson of the St. Albert Source for Sports Crusaders buzzes the net in the 9-2 blowout of the Whitecourt Wolverines on Feb. 22 in the Northern Alberta Midget AA Hockey League. The Crusaders (28-3-1), the defending Playoff Cup champions, and St. Albert Steel (25-5-2) are competing in the seven-team Besa division playoff tournament to determine the qualifier for the best-of-three metro conference series against the Anderson division rep. Visit namhl.ca for the schedule and results. BRUCE EDWARDS/St. Albert Gazette

The scores were unavailable between the Source for Sports Crusaders and Leduc Roughnecks and the Steel against the Fort Saskatchewan Rangers.

The seven-team playoff consists of games in Spruce Grove and Stony Plain.

The winner qualifies for the best-of-three metro conference semifinal against the Anderson division rep.

The rest of the round-robin schedule was unavailable at press time.

The St. Albert Royals can advance into the next playoff round with a victory Thursday against the Strathcona Warriors in the Rural & Edmonton Midget 15AA Hockey League.

The sixth-place Royals (15-11-6), seventh-place Strathcona (13-16-3) third-place Red Deer Chiefs (21-7-4) and second-place Hockey Central Panthers (25-4-3) are competing in the blue pool round robin and the top two teams advance to the best-of-five semifinals against the red pool qualifiers.

The Panthers are winners of the last two REM finals against the Royals.

Tuesday’s score between the Panthers and Strathcona (0-1) was unavailable at pres time.

The Royals surrendered four power-play goals against Red Deer, including three in the first period to trail 4-2.

The Royals were outshot 40-31 and Josh McCormack was in net.