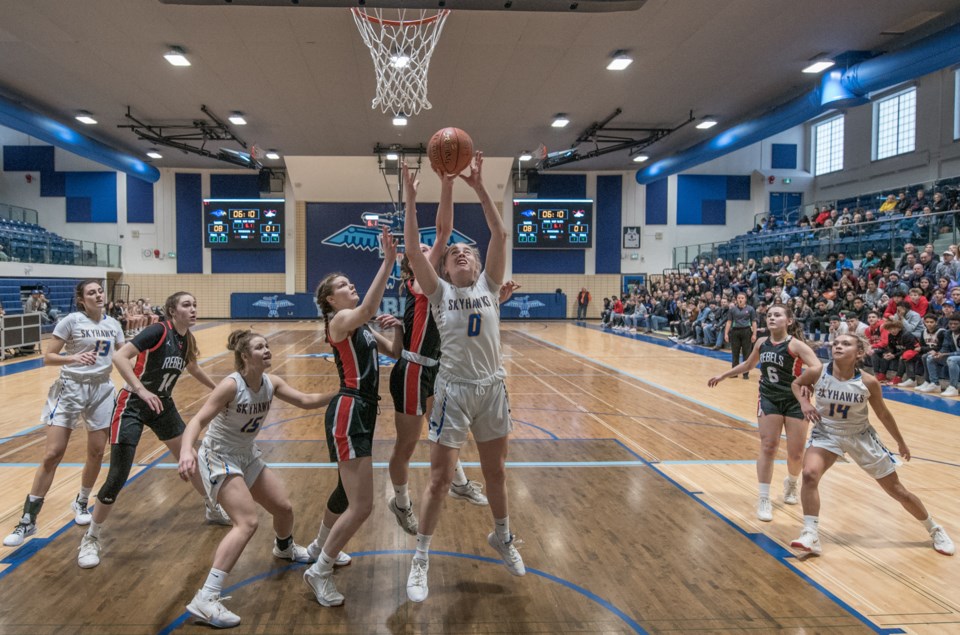 CENTRE OF ATTENTION – Teá DeMong of the St. Albert Skyhawks was a handful for the Jasper Place Rebels to stop in the metro Edmonton division one final last Saturday at Ross Sheppard High School. DeMong led all scorers with 16 points in the 84-48 victory as the Skyhawks three-peated in the last ganme before the 4A provincial tournament, which was postponed indefinitely by the Alberta Schools' Athletic Association because of the COVID-19 pandemic. Provincials were to start next week in Lethbridge for the Skyhawks. The defending champions are 31-1 overall – 14-0 in division one and 17-1 in six tournaments – as the winners of 25 in a row after going 30-5 last season. JOHN LUCAS/St. Albert Gazette

The midget elite playoff series between the St. Albert Sharks and North Central Impact in the Alberta Female Hockey League has been affected by Hockey Canada's cancellation of its sanctioned activities, including all Hockey Alberta events, until further notice because of the COVID-19 pandemic.

The five-team AFHL provincials were scheduled for March 26 to 29 at Red Deer.

The Sharks (18-7-1) had a first-round bye as the top team in the north and the fifth-place Impact (9-14-3) defeated the fourth-place Sherwood Park Fury (9-15-2) in the third and deciding game in the first round.

Sierra Whillans finished the regular season as the third-highest AFHL goal scorer with 17 in 23 games and tied for sixth in points with 24.

The Sharks lost the last two provincial finals against the Calgary teams by scores of 5-1 to Fire Red and 2-1 Fire White.

The St. Albert Blues punched their ticket into provincials as the metro conference winners in the Edmonton & Rural Bantam AA Hockey League final.

Provincials were to start next week in Sylvan Lake, however Hockey Canada announced Thursday night the cancellation of its sanctioned activities, which includes all Hockey Alberta events, until further notice because of the COVID-19 pandemic.

The last game for the Blues was Tuesday’s 2-0 decision against CAC Think Green Alberta in game three of the metro conference final at Jarome Iginla Arena.

Goal scorers were Kai Johnson on the power play with 43 seconds left in the first period and John Shields early in the middle frame as the Blues finished with 38 shots.

The Blues prevailed in the the best-of-three series opener 4-1 in St. Albert and the CAC answered with the 5-2 outcome at Confederation Arena.

The blue division Blues (19-6-7) and red division CAC (15-14-3) won their respective divisional playoff tournaments for a shot at provincials.

The playoff result also gave the Blues a berth in the best-of-three league final against the Lakeland Panthers (32-0).

Cohen Daoust led the Blues in playoff scoring with 11 points and was second in goals with five behind Teo Pisani’s six.