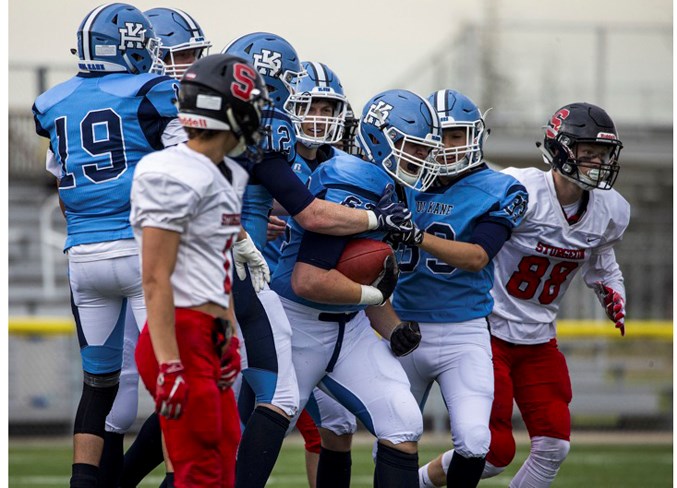 CENTRE OF ATTENTION – Marshall Missins is the man in the middle with the football as the Paul Kane Blues celebrate one of his two fumble recoveries in the first quarter against the Sturgeon Spirits in the division two Miles/division three Gilfillan pool A match Friday at Larry Olexiuk Field. Paul Kane won the metro Edmonton season opener 28-7. The halftime score was 21-0. CHRIS COLBOURNE/St. Albert Gazette

The start of the new season brought out the best in the Paul Kane Blues while the Sturgeon Spirits struggled to continue last year’s success.

“For the first game of the season it was a massive win. We needed this to boost our confidence from last year when we were 3-3 (and one tie),” said game star Jacob King, Paul Kane’s quarterback. “A lot of our rookies thought we had a bad team in spring camp, but we showed them that PK is back to play.”

“It’s pretty disappointing that we didn't perform like we should've,” said Will Campbell, a sleek Grade 11 wideout and one of 19 returnees from the 6-2 Spirits. “We didn't continue the legacy like we did last season.”

Paul Kane grabbed the game by the throat in the second quarter as King connected with Ty Bates for touchdowns of 30 yards early in the period and from the one-yard line with 2:51 left in the half.

King also scampered 15 yards into the endzone with 20 seconds to go before the break and converted all three majors.

It was 28-0 when Campbell gathered in a 25-yard TD pass from Zach Froese and Philip McLay kicked the convert with 6:20 to play.

Strathcona, 2-4 in the division one Carr conference last year, is coming off a 21-21 tie with the O’Leary Spartans.

A long list of improvements for Sturgeon includes, “Make our tackles, finishing our blocks, be stronger in the head to the refs and not make mistakes like we did after the play, catch the passes and not fumble. That's pretty much it,” Campbell said.

Paul Kane will see how good it really is in Friday’s grudge match against the St. Albert High Skyhawks at 5 p.m. at Larry Olexiuk Field.

The Skyhawks, 8-3 overall as last year’s finalists in the Miles and Tier III provincial north playoffs, toppled Paul Kane 29-0 in week three of the 2018 schedule.

“It’s going to be one good game,” King said of the battle of St. Albert. “That’s one game where we’re the most intense for and most ready for.

“If we win that game, one hundred per cent our confidence is going to go through the roof and we’re going to kill every team in this league.”

Paul Kane is poised to not only improve on last year’s 3-3-1 record, but should make the Miles’ playoffs – the top pool A and B teams qualify for the Miles’ bracket and the rest of the teams compete in the Gilfillan playoffs – with a stronger and more athletic lineup than the previous season.

“Last year we didn't have a lot of studs show up, but this year we had some stars come out of the shadows. We have (Alexandre) Tache (players on the team) who we’ve bonded with. They got some guys who know how to play and they’re here to play,” King said. “We will roll any team in this league when we all come together.”

It took Paul Kane until the second quarter to open the scoring after the defence played a big role in the scoreless opening 12 minutes after McLay's kickoff was bobbled by the Blues and Kyle Phillips recovered it at the Paul Kane 34.

Sturgeon would go on to fumble the ball away on their first two possessions as Marshall Missins, a behemoth two-way Grade 11 lineman, recovered the pigskin both times at Paul Kane’s 32 and Sturgeon’s 50.

“We went out hard on defence real fast right out the gate,” said King, who also patrolled the secondary on defence.

The last Paul Kane TD was scored off a 16-yard field goal attempt as King’s kick was tipped at the line, but the ball continued to travel high in the air before landing wide of the posts as Brady Cooke, a Grade 10 centre, hustled into the endzone to retrieve it from a pile of bodies.

Offensive stats from the Paul Kane coaching staff credit King with 231 rushing yards on 24 carries while going 7-for-14 passing for 119 yards.

King, 15, was also intercepted by Rory Seewalt in front of the Sturgeon 10 and the ball was returned to the 29 on the next series for Paul Kane after the first TD by Bates.

“My O-line made me perform a lot better,” said King, who avoided losses in the backfield on a number of plays with his rugby-like running ability to escape trouble for substantial yards. “I trust my guys and they trust me so I put all of my heart into the field.”

Aidan Purdon gained 60 yards on 14 carries as Paul Kane finished with 321 yards overall on the ground.

“It was all about team work today. Every position we put out the work, especially on defence,” King said. “We’re all one team now. We’re all one family and it’s all because of the effort we put in. At practice everyone is there.”

While Paul Kane controlled the controllables, Sturgeon was its own worst enemy in several areas. A glaring number of penalties, including some 15-yard infractions for undisciplined actions, played a role in keeping some of the drives alive for Paul Kane. Snapping the ball from centre was a major issue early in the contest and dropped passes, including a sure TD in the corner of the endzone in the third quarter while down 21-0, also proved costly.

Campbell was Sturgeon's best offensive weapon with seven receptions for around 130 yards.

Dylan Young and Phillips were also on the receiving end of passes from Froese, the 2018 Gilfillan conference MVP.

Defensively in the first quarter, Addison Chaabane’s tackle on third down on the first series by Paul Kane turned the ball over at midfield and on PK's second series, Carson Antoniuk recovered a fumble at the Sturgeon three-yard line.

When asked if Sturgeon was nervous going up against an established Miles’ team in Paul Kane, Campbell replied: “That’s what the coach (Chad Hill) was saying but I’m not really too sure,” he said. “We just weren't working as a group in the first half nor in the second half.”

Sturgeon will look to rebound against Strathcona with the additions of Kalem Stuermer, an athletic transfer from the Fort Saskatchewan Sting who led the 2018 Gilfillan conference in tackles, and defensive end/linebacker Karl Haasz, who tore his ACL in the St. Albert Storm's midget spring league practice in Grade 10 and missed all of his Grade 11 season.

“We’ve just got to work together and keep the chemistry going. Last year we had really good chemistry with the leaders and this year we should do the same,” said Campbell, 16, who also lined up at cornerback against Paul Kane.