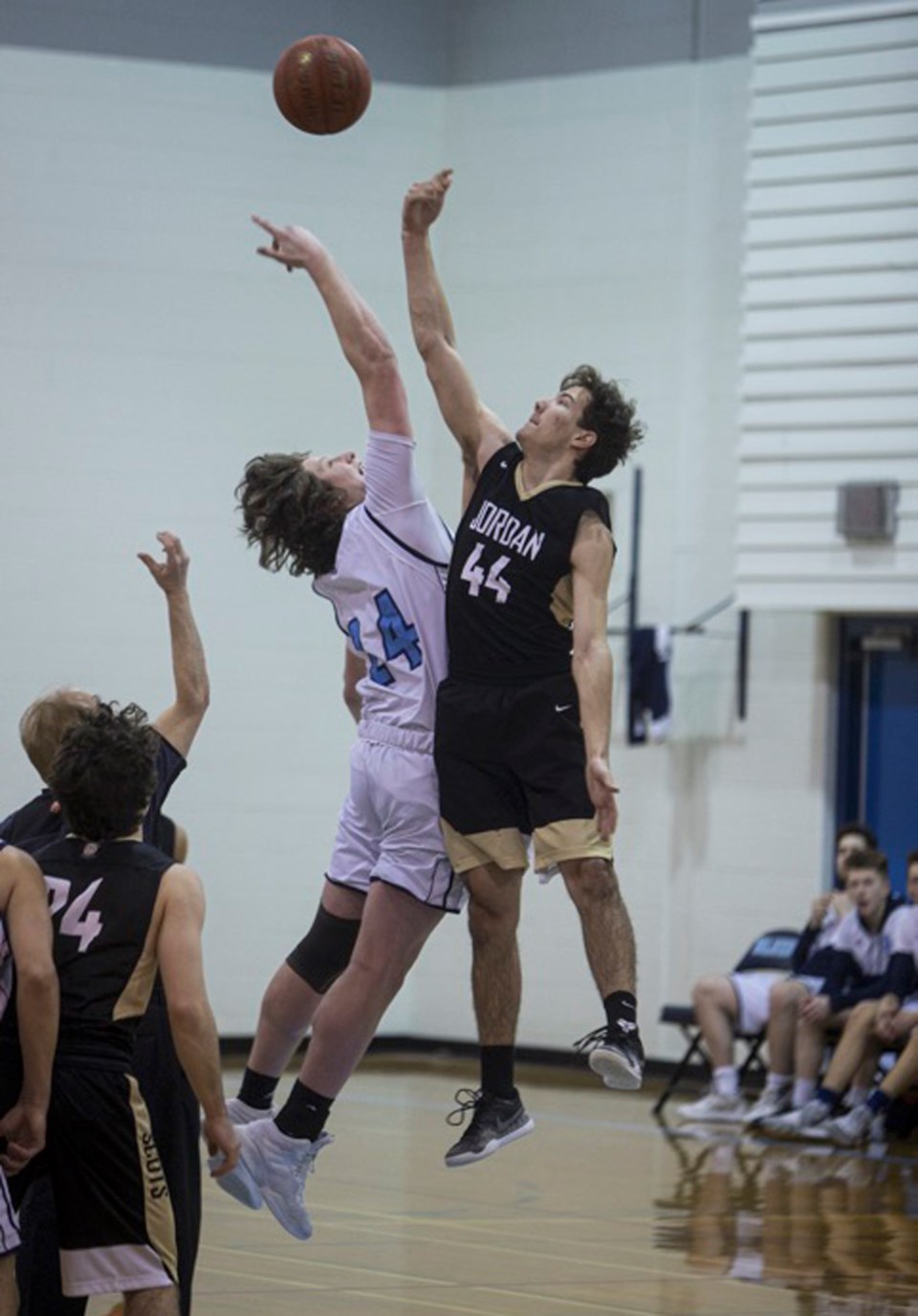 The Paul Kane Blues have a point to prove after missing the mark in last year’s playoffs.

The only loss in 14 metro Edmonton division two games was by two points to the Holy Trinity Trojans for the championship and the result has hung over the Blues like a black cloud.

“Unfinished business for sure,” said Grade 12 forward Ryan Holmes after the Blues zipped past the Archbishop Jordan Scots by 20 points in Monday’s quarter-final at Paul Kane. “All the returning guys still have a chip on their shoulders from last year’s city finals, but I'm not going to jump the gun and talk about finals yet because we still have one more game and a very strong team to go through.”

“They’re a gritty team. They're going to bring it,” Holmes said of the Panthers. “We have to send a message. We have to come out strong. The energy we brought tonight we have to carry that through the rest of the playoffs.”

The Blues know what the Panthers are all about after last month’s 76-52 win at Paul Kane.

“They’re a pretty good team. They’re really tough and fast. They like to run transition a lot, but just the balance we have with our defence and shooting ability we’ll be able to handle them real good,” said Grade 11 guard Joshua Fraser.

The playoff opener for the Panthers was 74-64 against the Millwoods Christian Royals (5-5), the same team that knocked the Blues out of second place with a surprising 83-77 victory at Paul Kane in the last game before the playoffs.

“We feel we're the best team in the league and we didn’t play to our best,” Fraser said. “Now we’re coming to take the championship.”

Another motivating factor for the Blues was the 94-87 loss to ABJ at Paul Kane before the exam break after falling 67-62 to the Eagles five days earlier in Sherwood Park.

“Today was all about the defence,” Holmes said of the 90-70 rematch with ABJ (5-7). “The last time we let them put up 50 points in the first half against us and we take pride in our defence and that’s something we didn’t want to let happen again.”

The Blues blew ABJ away in the second quarter with 19 unanswered points during a 23-8 offensive flurry for a sizeable 37-19 advantage at halftime.

“We came out and got buckets,” Fraser said. “Our last game (against the Royals) we struggled a lot from the three (point arch) but then our coaches at practice just drilled us in shooting and shooting and that helped us in knocking down jumpers tonight.”

After three quarters it was 62-50 and in the last 10-minute period Tyler Yanick's three-pointer pulled ABJ to within 12 at 70-58 and about two minutes later another Yanick three cut the lead to nine points at 75-66.

Yanick led all scorers with six threes and 32 points.

“They almost came back, but we got it back together and we were able to take the W,” said Fraser, who drained five of this team’s 10 three-pointers and his 19-point outing included four threes in the second half.

MacKinnon's fourth three-pointer made it 81-68 with under five minutes to go.

Holmes turned in an inspired performance with 13 points in the first half and 23 in total as Paul Kane's most dominating player in the last home game of the season.

“It’s great playing here. Basketball is important to all of us and we're all out here to have fun, but we want to win as well and have a great time,” said Holmes, 17, who relished the opportunity of the Blues righting a wrong against ABJ. “There is definitely a certain element of pride. It's playoffs and these guys are coming into our own gym, we call it the jail, and they had beat us here before so it feels good to overcome that loss.

“They were a tough first round matchup. They’re a good team and sixth seed (in the playoff bracket) doesn’t represent just how good of a team they are.”

The Blues are now 5-1 in division two since their shortcomings against ABJ.

“That was a real tough loss for us, but it helped us bond as a team,” said Fraser, a newcomer from the St. Albert Skyhawks.

The Blues, with six returnees on the roster from last year’s 21-3 lineup, are poised for a return trip to the final without arguably their best player all season, Owen Cooke, because of a torn ACL the Grade 12 forward suffered in spring league action.