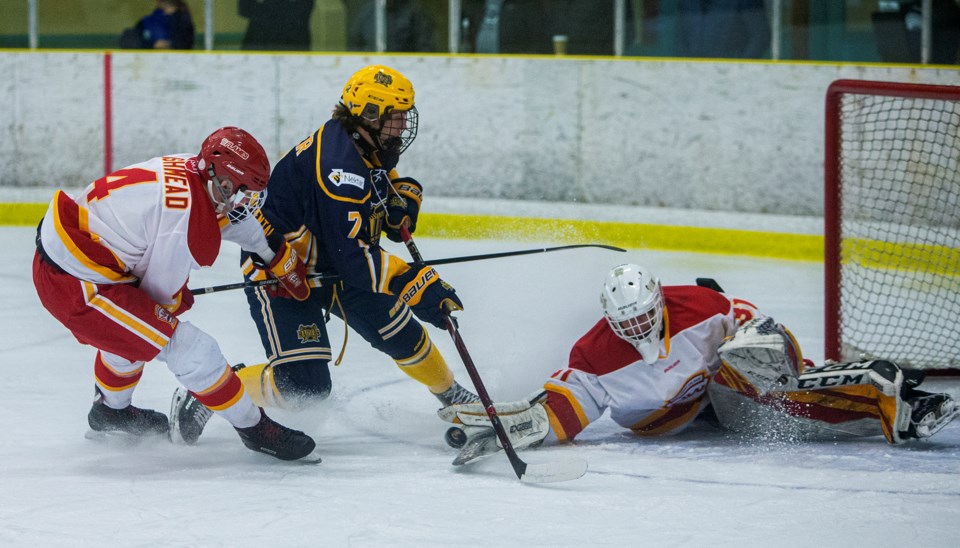 OFFENSIVE RAIDER – Koehn Ziemmer of the St. Albert Nektar Raiders attacks the net in the 4-1 win over the Calgary Flames on Dec. 22 in the last Alberta Midget AAA Hockey League game before the Mac's tournament in Calgary for the defending Mac's champions. The Raiders started off the Mac's with wins of 8-1 against the Calgary Royals and 6-2 against the Airdrie Bisons as Ziemmer led the team with five goals and seven points in the two games. Sunday the Raiders lost 3-2 on a late goal by the Cariboo Cougars. The last pool four round-robin game was Monday against the Moose Jaw Warriors and the score was unavailable at press time. The result determined if the Raiders qualified for Tuesday's quarter-finals. CHRIS COLBOURNE/St. Albert Gazette

Monday’s result against the Moose Jaw Warriors determined if the St. Albert Nektar Raiders continued their quest to repeat as Mac’s Cup champions or headed home.

The score in the last pool game for both teams was unavailable at press time.

The first-place team in the five pools and three wild cards competed in Tuesday’s quarter-finals and the semifinals were played later that day.

The Raiders were winners of two in a row in pool four before Sunday’s 3-2 loss to the Cariboo Cougars (3-1).

The Cougars killed off a late penalty before potting the winner past netminder Andreai Proctor-Ramirez with 31 seconds remaining.

The score was knotted at one after the first period as Maddux Nollski deposited a backhander for the Raiders.

In the third, the Cougars made it 2-1 and the Raiders quickly responded with the equalizer by Mark Hanson-Torwalt, who banked the puck in off the netminder from behind the cage with 4:48 to play.

The Raiders (18-1-3, 81 GF/31 GA) skated into the 42nd annual Mac’s World Invitational Tournament as the top team in the Alberta Midget AAA Hockey League at the Christmas break and the opening two games were against the bottom two south division teams.

Koehn Ziemmer led the offensive assault with three goals and one assist in the 8-1 rout of the Calgary Royals (7-1-3-3) and the 15-year-old forward tallied twice on the power play and added one assist in the 6-2 outcome against the Airdrie Bisons (3-17-2).

Ziemmer, a Mayerthorpe product selected fourth overall in the 2019 Western Hockey League bantam draft by the Prince George Cougars, has 10 goals, including four on the power play, and 16 points in 18 AMHL games.

Against the Royals, Chase Visser and Drew Kuzma struck twice and Evan Forrest also scored. Shots were 36-26 for the Raiders and Proctor-Ramirez was in net.

Last year’s Mac’s Cup championship was the first for a St. Albert male hockey team and the Raiders have four players (Proctor-Ramirez, Pedersen, Jaxon Dube and captain Mathieu Gautier) back from the 6-1 lineup that joined the 1990 Eagles Raiders as the only St. Albert teams to qualify for the final.

Gautier is the team’s top point producer with 24, Ziemmer and Dube are the co-leaders in goals with 10 and Pedersen leads all AMHL defencemen with 14 assists and 18 points.