Rangers tied up by AS Roma

A controversial goal by AC Roma with seven minutes remaining left the St. Albert Impact Rangers fit to be tied in Wednesday’s division 1A match at Riel Park.
0
Jun 20, 2009 12:00 AM By: Jeff Hansen 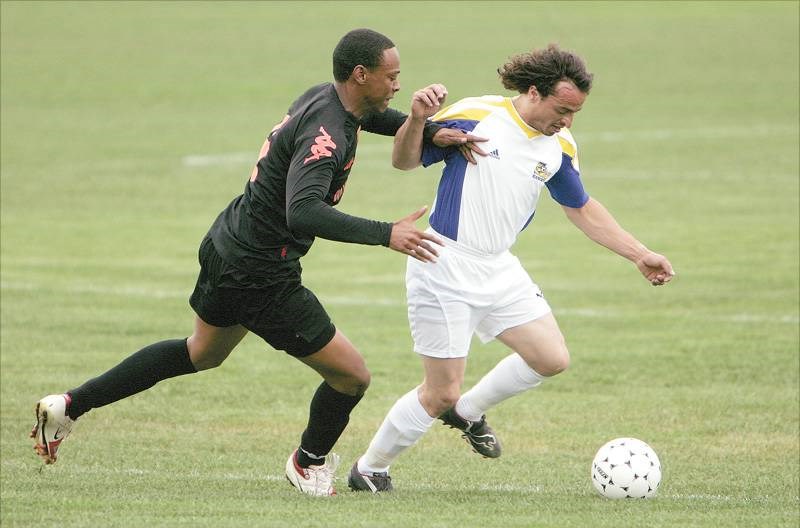 A controversial goal by AC Roma with seven minutes remaining left the St. Albert Impact Rangers fit to be tied in Wednesday’s division 1A match at Riel Park.

“They got a really cheap late goal to tie it up,” Rangers keeper Ryan Austin said after the 1-1 draw in the Edmonton District Soccer Association.

After Ryan Sebastianelli of the Rangers was red carded with a nasty tackle from behind near midfield, Roma scored the equalizer on the ensuing free kick. The Rangers argued Roma was offside on the goal but the referee let it stand.

&#147;Our defence had pushed up as they kicked the ball and left two of their men inside the 18. The ball fell right to them and [the referee] let them play on. The rules say [they&#146;re] offside when the ball is kicked but apparently the ref didn&#146;t see the two men that were right there in front of me but behind my two defencemen,&#148; Austin said

Both teams had issues with the spotty officiating throughout the rough and tumble contest. The pot started boiling in the 12th minute when a Roma goal was called back after the scorer sent Sebastianelli sprawling with a wicked body check while tracking down the through ball. The foul-plagued affair continued with both teams racking up yellow cards. Mini scrums also kept the referee busy trying to maintain the peace.

“It was chippy on both sides but you can’t fault the ref. It goes both ways. There were late tackles on our side, late tackles on their side. We’re grown men and we should be playing a little smarter than that, but that’s the way the game goes,” Austin said.

The first half was scoreless because of Austin’s exceptional netminding. Roma was allowed to roam the pitch at will with the ball but the wily Ranger refused to let them score. His best save was a brilliant header to take a breakaway ball away from the Roma striker as he blitzed through the heart of the St. Albert defence while trying to run under it.

The Rangers had only a couple of quality chances in the opening 45 minutes, including a free kick by Marc Tetreau in prime scoring territory, but the veteran striker missed the net by a mile.

“It looked like they had more control than us,” Austin said. “We were panicking at times. We’ve got to settle the game down, play our game and move the ball at our pace and let them come after us, not the other way around, which is what we did for the first probably 25 to 30 minutes quite easily.”

The Rangers ramped up their attack in the second half and were rewarded with a goal by striker Emmett Keenan in the 56th minute. The second-year Ranger and former Chester City standout potted his team-leading fifth marker of the season off a corner kick by Neil Bingham.

An even-up call against Roma after Sebastanelli’s ejection gave the Rangers a bit of a spark. However, during a scramble by the goal line on a corner kick in the last minute of play, the ball was covered up by the Roma keeper as the Rangers frantically buzzed the net.

The draw left both teams with identical records of four wins, one loss and two ties. At the halfway mark they shared second place, two points behind Croatia (5-1-1).

“It’s not bad but we would like seven wins at this point,” Austin said. “With seven more games left, we’ll see what happens.”

The tie was the second in two games for the Rangers after a 1-1 stalemate with fifth-place AC Milan last week at the ESA Complex. Milan pulled even in the last five minutes of play.

The Rangers and St. Albert Impact were both relegated into division one after posting losing records last year in premier. Impact and Roma finished bottom two in premier and the Rangers went on to lose their relegation series to Punjab United.

“We had mistakes last year. We have to learn from them and come back and play stronger and work our way back up to premier. That’s our goal,” Austin said.

It was a dramatic fall from grace for the Rangers. The long-time premier club posted only six wins in 18 matches while finishing eighth in the 10-team standings. The previous year they captured the premier pennant with 12 wins, two losses and four ties and were the tier I provincial bronze medallists.

“We want to be in premier without a doubt. That’s where the Rangers have been for 15 some odd years. Getting dropped down like that is sort of a kick in the pants. You don’t like it but you take it,” said Austin, 30, the Rangers’ MVP in 2007.

Life in division one for the Rangers has been a struggle at times.

“It’s been an eye opener. We’re used to having better officiating with two linesmen instead of just one ref who can’t see everything on the field so we have to get used to that,” Austin said. “The teams are a little more chippier than in premier. It’s not as much finesse and skill. It comes down to who really wants the game more.”

Next week the Rangers host sixth-place Villa FC at 8:15 p.m. Wednesday and fourth-place Sherwood Park at 4 p.m. Sunday. The Park handed the Rangers their only loss, 3-2 in week two.