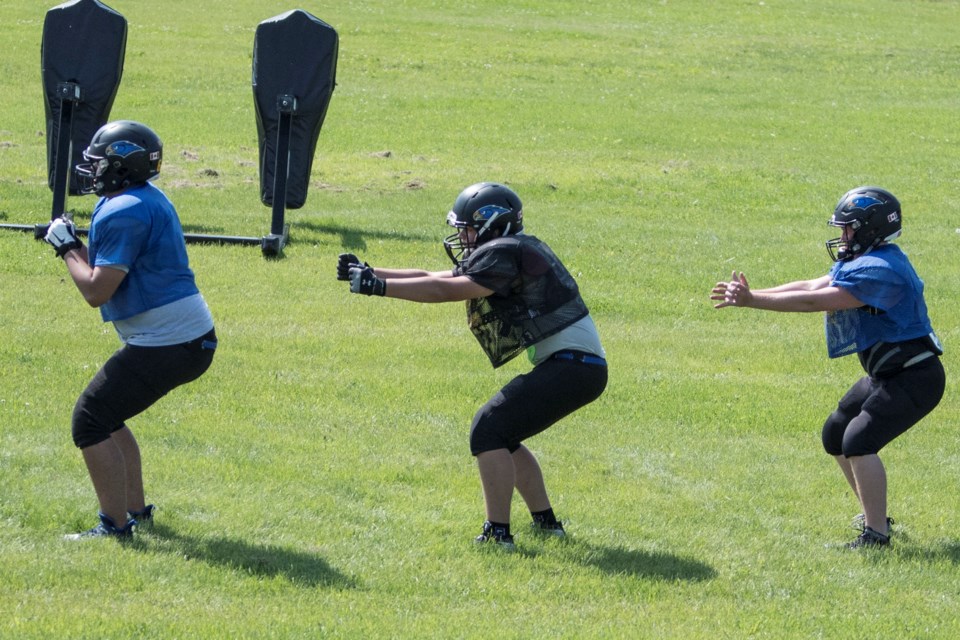 LINEUP – The St. Albert High Skyhawks perform a drill during practice at the St. Albert Catholic High School field. The third-ranked Tier III (450 to 749 students) team in the province leveled the visiting Beaumont Bandits 65-0 in Friday's division two Miles/division three Gilfillan pool A season opener Friday in the metro Edmonton league. On tap for the 2018 finalists in the Miles conference and TIer III provincial north playoffs is the rivalry game against the Paul Kane Blues at 5 p.m. Friday at Larry Olexiuk Field. Last year the Skyhawks shutout the Blues 29-0. JOHN LUCAS/St. Albert Gazette

Beating the Beaumont Bandits by 65 points marked the beginning of a big season of football for the St. Albert High Skyhawks.

“It was overall a pretty good game. The team wasn’t the strongest, but with our plays I thought we executed them pretty well so that always helps,” said Jackson Ganton, one of several Grade 12 standouts on the veteran-laced Skyhawks, the No. 3-ranked Tier III (450 to 749 students) team in the province.

“Our defence is pretty solid,” said Ganton, a triple threat at slotback, safety and special teams. “DBs are good, but we lost one of our corners (Colin Torok-Both) last game to a collarbone injury and Matt Swecera, our other outside linebacker, is out for now, but other than that our defence is still doing pretty good. They stepped up last game and hopefully they do same against Paul Kane.”

The next pool A match in the division two Miles/division three Gilfillan conference is the rivalry game against the Paul Kane Blues at 5 p.m. Friday at Larry Olexiuk Field.

It’s arguably the second-biggest Battle of St. Albert in high school sports in terms of hype and fan support next to the Skyhawks versus Paul Kane in women’s basketball.

Last year’s 29-0 thumping of Paul Kane marked the second victory by the Skyhawks against the crosstown Blues since the 14-10 decision in the inaugural St. Albert showdown between the two teams in 2012.

“We’re pretty amped about it. We want to bring the hammer like we did last year and show no mercy on them. We want to try and execute our plays as well as we can and see how it goes,” said Ganton, who scored second-half touchdowns last year with a pick-six (one of four interceptions thrown by Paul Kane quarterback Jacob King) and the 23-yard catch in the endzone.

The second game following the Paul Kane tilt was also Ganton’s last of the season as the All-Edmonton Miles Team defensive back in Grade 10 suffered two lacerations on his right kidney while returning an interception in the late stages of the 21-0 win over the St. Francis Xavier Rams in St. Albert.

“I was going to the endzone to score and I dove (for the goal line) because I wasn’t going to make it and someone hit me from the side right into the ribs and it cut my kidney,” Ganton said of the collision near the sideline. “It wasn't fun. I got winded and I felt like I couldn’t breath for five minutes. It was just a struggle and then the next morning it really hurt to walk and I could barely get out of my own bed.”

Ganton, who was urinating blood “a couple of times” after the game, tried to gut it out but was overcome with pain.

“I didn’t really say anything about it and then I tried to practise on Monday and I couldn’t do much and when I went home it was just straight blood and I told my dad and we went to the hospital and got checked out.”

The next six games – including losses of 27-12 to the Archbishop Jordan Scots in the Miles' final at Commonwealth Stadium and 38-18 to the Holy Rosary Raiders of Lloydminster in the Tier III north final in St. Albert to finish 8-3 overall (“In the finals we didn’t get the end results that we really wanted,” Ganton said), – the injured Skyhawk played the role of cheerleader.

“It was tough, but I was supporting them as much as I could and helping out. The backup halfback for me, (Derek Dubrule) was in Grade 10 last year and he really stepped it up when I got injured so that helped out the team,” Ganton said. “He’s improved a lot this year. He’s going to be a big key on our defence.”

Ganton is better than ever especially after spending the summer mixing it up in junior B lacrosse with the Tier I St. Albert Crude and in 22 league and playoff games combined recorded eight goals, six assists and 34 penalty minutes.

“I’m feeling pretty good. I’m one hundred per cent right now. It’s my senior season so I'm just trying to ball out and have a good time, and do as much as I can.”

Despite playing in just five league games, Ganton led the Miles in interceptions (six), tied for first in TD catches (six) and finished third in receiving yards (271) while reeling in 15 passes in addition to rushing for 238 yards on 16 carries for four TDs. He was also credited with 19 tackles.

Ganton was also the team’s nominee for the Miles’ conference MVP award and was an All-Edmonton Miles Team defensive back selection.

“It means a lot to get nominated. It means all the coaches have faith in me. They let me ball out and have fun. They let me see what I can do on the field and they support me in everything I do,” said Ganton, 17.