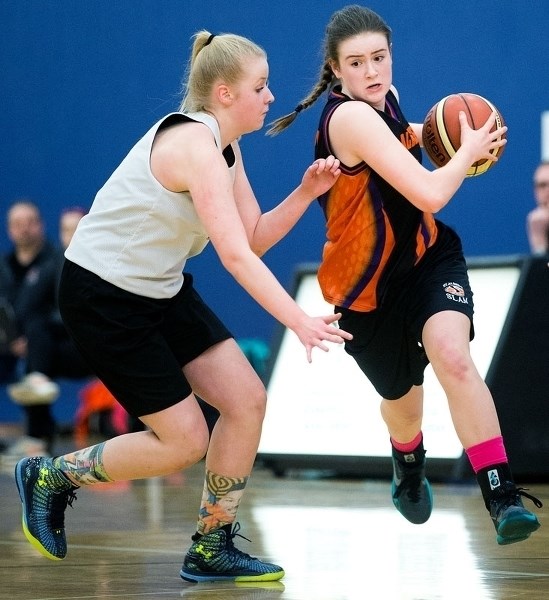 DRIVE TIME &#8211; Aine Murphy of the St. Albert SLAM midget A team pushes past a defender in Sunday&#8217;s 51-30 win over SBA Caldwell in the Youth Provincial Championships final at the Saville Community Sports Centre. The SLAM finished 27-0 overall after going 20-0 last year. Murphy is one of five girls on the team during a three-year 65-0 span playing SLAM basketball that started with the 2014 bantam A provincial gold medallists.

The SLAM not only repeated as the undefeated Edmonton Youth Basketball Association and Youth Provincial champions but five players celebrated their third provincial title and third perfect season as graduates of the 2014 SLAM bantam A provincial gold medallists under the guidance of head coach Rick Stanley.

“This is the sweetest,” exclaimed Isabella Cuciz, after the SLAM downed SBA Caldwell 51-30 in Sunday’s final.

“It means everything. You have no idea,” Cuciz added. “It means that our hard work has paid off over the three years going back to back to back. Our work ethic over the years has been unbelievable and we can thank Rick for that. He got us playing with the basketball. He’s been the greatest coach over the years.

“I’m so happy that we’ve been able to accomplish this. It’s amazing.”

Cuciz, Kaitlyn Kluttig, Aine Murphy, Ella Stanley and Kenzie Thera have never suffered a loss during a three-year 65-0 run with the SLAM.

Victoria Ivicak was also on the 2014 team and about half of this year’s 12-player roster are returnees from the 20-0 midget A team.

“It’s awesome. It’s phenomenal. It just feels warm,” said Thera, who drained a team-high 13 points in the gold-medal victory. “It’s just crazy that we did it three years in a row. It’s great to keep going and just push hard and each play that we do we give the same effort.”

This year’s team finished 27-0 overall in league play, one tournament and provincials.

“They’re all equally awesome and having a gold medal around our necks with Rick Stanley coaching is just great,” Thera said. “It’s phenomenal how we just gel as a team. It doesn't matter who is where, we’re all one team and everyone is best friends.

“St. Albert has a great group of girls that keeps coming out to play and our coach does the rest and it just works. It’s not just games, it’s each practice. We work harder than most teams and we have to keep pushing and pushing and pushing. It just comes down to work ethic and it shows up on the court on game day.”

The SLAM play to win from the opening tip-off to the last buzzer.

“We have got lots of loose balls, we’ve been finishing lots and we’ve had such great teamwork. That’s why we’re so successful,” Cuciz said.

The only Grade 8 hoopster on the roster is Isabella Gaulden of the Sir George Simpson Voyageurs.

“It feels very good to be on a team like this. Every player is so good,” Gaulden said.

The SLAM continued their winning ways at provincials by defeating CalWest 65-53 and NW Frizzell 55-42 in pool A and NCBC 61-47 in the semifinals before beating SBA Caldwell for the sixth time this season. The previous week the SLAM toppled SBA Caldwell 58-40 in the EYBA final.

“Today we just came out to play. We might have wanted it more,” Cuciz said. “We all did our part and it really paid off.”

The first nine-minute period was a surprising low 6-4 score for the SLAM.

“It was really nerve-racking at first. We thought they were going to come out really strong, which they did, so it was good to come out with the win because we had to work really hard for it,” Gaulden said.

The first half ended with the SLAM in front 22-13 as Brooke Froment of Morinville scoring six points before the break.

“It was a battle. Those girls have always given us a run for our money and today we just had to put the boots to them and it worked out for us in the end,” Cuciz said.

The SLAM cranked it up during a nine-point run to start the second half while outscoring SBA Caldwell 19-6 before quarter time as eight players chipped in offensively, led by Thera’s five points and a pair of field goals 23 second apart by Ella Stanley midway through the third period.

“They fought a good battle but we just fought harder,” said Thera, a Grade 9 ESSMY Leopard who rose to the challenge shooting-wise in the final. “We had fouls but I think we had control of the game. We kept pulling through and got after the loose balls and fought for every rebound. We just kept going and going and going.”

“It’s a really unique group of girls that achieved something special over a very long time,” said the bench boss of the Paul Kane Lady Blues, who noted that Thera and Murphy led the team in a variety of hustle and work ethic categories at provincials.

“I tell you what; I love playing with these girls rather than against them because they all have individual talents that is just so hard to play against but it’s amazing to play with them, said Cuciz, a Grade 9 Falcon who played on the U14 provincial team last summer with Thera, Froment, Stanley and Kluttig.

FREE THROWS: Stanley was presented with a $250 Tangerine leadership award after the final. The Grade 9 post for the two-time reigning SAPEC city champion Gators was nominated by the SLAM team for her commitment to leadership and support of her teammates.

The SLAM mini B boys, coached by Matt Wangler, were awarded silver at provincials after the 61-28 loss to Bow River 2 in Sunday’s final to finish 1-2 in the tournament at the Saville Community Sports Centre.