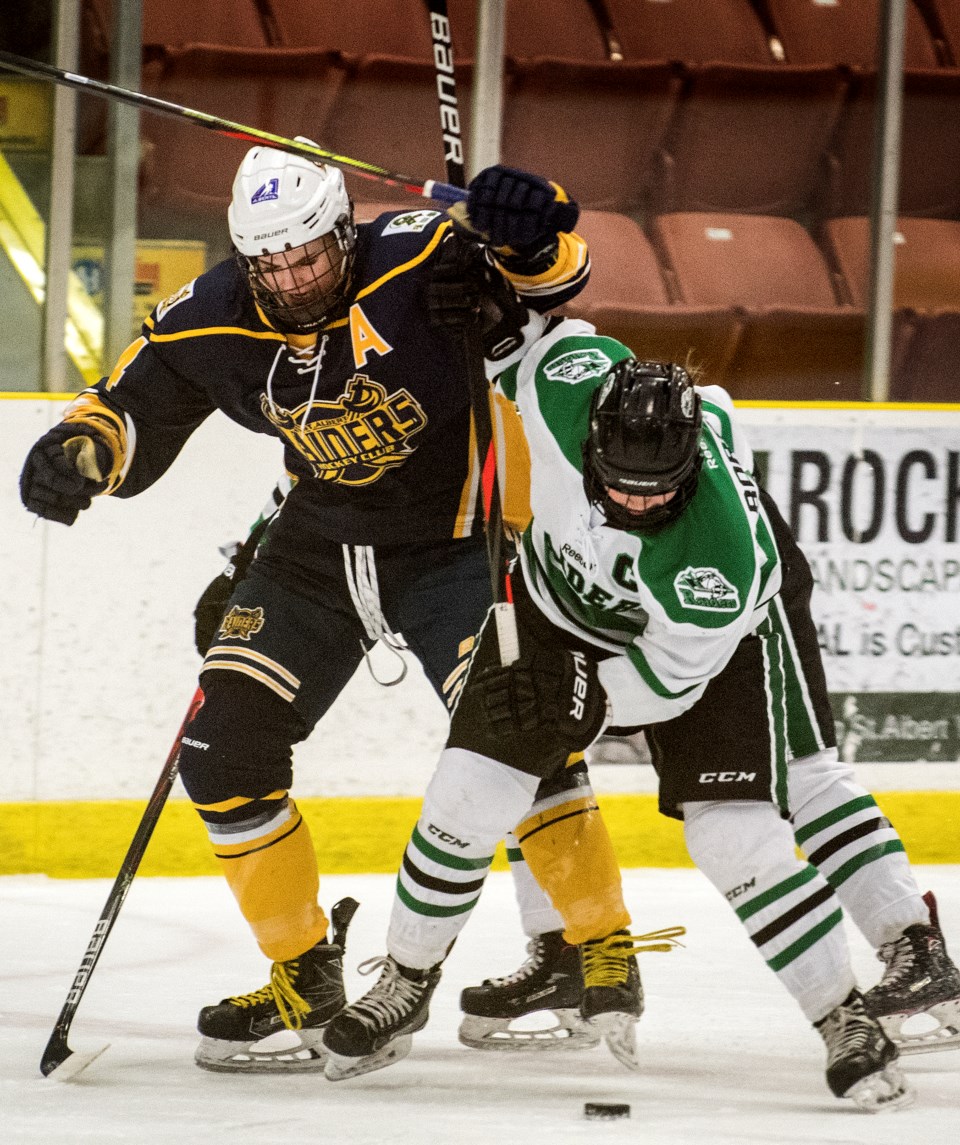 KNOTTED TOGETHER - Assistant captain Jaden Bogden of the St. Albert Slash and Kaia Borbandy of the Rocky Mountain Raiders tangle for a loose puck in the Alberta Female Hockey League. The Slash (18-1-1) won 2-1 Jan. 4. The three-time defending Esso Cup midget AAA national champions are back on the ice this weekend after the exam break with games against the Red Deer Chiefs today at 2:15 p.m. at Go Auto Arena and Sunday against Calgary Fire at t 4 p.m. at Father David Bauer Arena.

The goal for the St. Albert Slash is to shoot for bigger wins with the playoffs in their sights.

The success rate offensively for the perennial midget AAA powerhouse in the Alberta Female Hockey League is 2.95 goals per game while defensively achieving a remarkable 0.85 goals-against average after 18 wins in 20 games.

“We want to do more than beat a team 1-0. We want to get more of a separation, get some more offensive power and be more of an offensive threat as a team instead of just defensive,” said left-winger Cassidy Rhodes.

“We have a goal for our forwards to score at least three goals a game now and hopefully gain confidence from that going into playoffs,” said assistant captain Kelsey Hall. “We’re definitely challenging ourselves and our forwards to start scoring more just because we haven't allowed many goals against all season and that’s a thank you to our D and our goalies.”

Jenna Goodwin, the 2019 AFHL rookie of the year, is tied for the league lead in goals with 11 and captain Alli Reich is next in line with nine.

Goodwin’s 17 points ranks third overall and Reich is fourth with 16.

The next highest Slash scorers are Rhodes and Hall with seven goals apiece.

The focus offensively for the Slash includes “taking more shots, drive the net more, get some more bodies in front and just sacrifice the body while someone takes a shot,” Rhodes said.

As for the stretch drive toward a fourth-straight Esso Cup, “We’re approaching it like we need to get the final things fine-tuned because we do want to go for another national championship. We do want to get really far so we want to get the fine-tuning out, things that we think could be a hindrance going forward or against harder teams,” Rhodes said

Half of the team’s 18 wins are by shutouts, including the last two victories before the exam break as Mabel Maltais (11-0, 0.90 GAA) recorded her league-best fifth clean sheet and Holly Borrett (7-1, 0.80 GAA) posted her fourth goose egg.

“Our defensive play is absolutely amazing, less than a goal against average per game, which is huge,” Rhodes said. “We’re not trying to overcomplicate things by trying to do too much. We're doing our jobs. We need to stay in specific areas, kind of like supporting each other, and we’re also reading the play more effectively and actually looking around to see where everyone is on the ice and it’s helped us stay more together defensively.”

“It really starts in the dressing room. We have a great group of girls who all get along. We play for one another and we want to be better for one another so we just work hard for one another and that translates onto the ice. We work well together and if our coaches, Dan (Auchenberg) or Sandro (Pisani), switch things up we are able to adapt to things,” Hall said. “We’ve also kind of went through some adversity, there’s been times where we’ve been down in games and have come back, so that's kind of got us stronger.”

Rhodes, 15, is living the dream as a Slash newbie after producing 15 goals and 30 points in 23 games with the 2018/19 bantam elite Sherwood Park Royals in the AFHL.

“It’s a surreal experience. I’ve watched them since I was little and I really did have my heart set on being here. I did a lot to train to be on this team and I'm super excited I'm here. It's been an absolutely fantastic experience. The girls are amazing,” said the Ardrossan product.

Rhodes has learned on the fly what it takes to play at the midget AAA level while generating 15 points in 20 games.

“This has been a real year for improvement. It was quite a challenge at first adjusting to all the new things. Playing with such an age difference, like 14 when I started playing to 18 years old, as well as the maturity level was something you had to get used to. There's also the quickness and the amount people can capitalize on mistakes that they wouldn't really always capitalize on (in bantam elite). That really affected me hard," said the Grade 10 Vimy Ridge Academy student. "I do want to get better and I feel like I'm getting better at a quicker rate now. I've started to get my pace of development going quicker,”

Hall, 17, is also a new Slasher after spending the last two midget AAA campaigns with her hometown Lloydminster team.

“I absolutely love it here. There are no complaints at all. It’s a great group of girls and our coaching staff is unlike any I've ever had before,” said the left winger who wanted to “go out with a bang” in her last midget AAA hurrah by leaving the Steelers for a shot at playing with the Slash.

“Everything just works here and everyone is 100 percent committed. Everyone wants success for everyone. There is just a family atmosphere to everything. It's definitely different from what I've experienced in Lloyd, but it’s such a better difference,” Hall said.

“I needed to be prepared because I needed to make sure that it was our best game being played against them. They were the best and you wanted to beat them,” Hall said. “There's always been a rivalry between the two teams so there's definitely you could say bad blood. You always wanted to win because you didn't want to lose that's for sure. You wanted to give the message that you can beat the Slash.

“There was just something about the Slash.”

Hall has contributed 12 points in 20 games for the Slash after rolling up 12 goals and 25 points in 29 games last season and nine goals and 15 points in 28 games the season before with the Steelers.

“My first half was definitely different for me. Normally I’m a goal scorer and I wasn't really finding the back of the net, but I feel like I've contributed good enthusiasm and leadership qualities to the team. My D zone has also got so much better as well and thanks to Sandro and the rest of the coaching staff for that,” said the Grade 12 Bellerose student who has lit the lamp in the last three games.