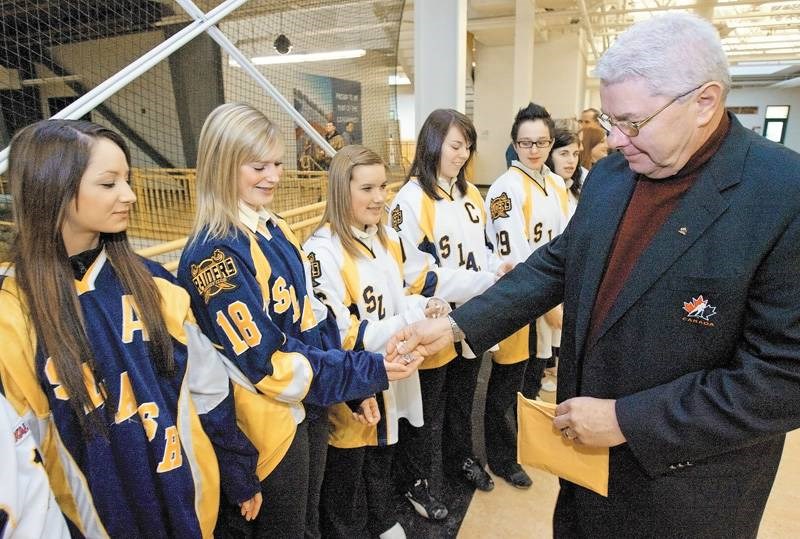 "It was an outstanding bid that came from this community," said Terry Ledingham, executive officer of Hockey Canada and former Hockey Alberta president.

"It's going to be amazing for our community," said Joe Kueber, speaking on behalf of the St. Albert Minor Hockey Association and the Raiders Hockey Club.

"It's a great opportunity for St. Albert to showcase its athletes, its beautiful city, this amazing facility and the people that work and help us bring events such as this to St. Albert."

The 2011 ESSO Cup will feature five regional champions (Pacific, West, Ontario, Quebec and Atlantic) and the host St. Albert Slash of the Alberta Major Midget Female Hockey League (AMMFHL). The teams play a five-day round robin, followed by the semifinals and the bronze and gold medal games. The final will be televised by TSN, the official broadcasters of Hockey Canada.

Girls Hockey Calgary and the Calgary Flyers hosted the inaugural ESSO Cup in 2009 at the Max Bell Centre as the Westman Warriors (West) beat the Scarborough Sharks (Ontario) 5-2 in the final. In the bronze medal game the Flyers edged the Edmonton Thunder (Pacific) 3-2.

The 2010 championship in Regina will be hosted by the Regina Rebels of the Saskatchewan Female Midget AAA Hockey League.

St. Albert beat out two other bids, one from Ontario and another from Quebec. It's the latest of several major events hosted by the Slash, a member of the Raiders Hockey Club, and St. Albert minor hockey. They include the 2008 Western Canadian Midget Female Championship at the NAIT Arena and the 2009 AMMFHL all-star game at Performance Arena.

"We started putting this together last February. You submit and you get shortlisted and you go through a question and answer phase and then you start waiting while it goes through the recommendation stages," said Dean Hengel, chair of the 2011 ESSO Cup host committee and the Slash general manager/assistant coach.

"The Hockey Canada bid package is very detailed. They expect you to present a plan and a budget that you can start operating a championship immediately. They were looking for detailed marketing plans and detailed ticketing plans.

"It includes a large allocation for expected contra advertising accounts that we anticipate developing with local and regional media," he said. "We believe we need to create an awareness of the female game and the program in St. Albert. We think we've got some really interesting ideas that we can put forward and make that a reality."

Ledingham expects the impact of 2011 ESSO Cup will be felt not only in St. Albert but across the country.

"This event here will put the female game on the map even more so," he said. "I'm hoping when we're all said and done here in St. Albert in 2011 that there will be something left behind here as an important cornerstone for the game. That's very important for me and for all the young ladies who will be playing in that event and for all those that are coming forward."

The Slash are in good shape for the 2011 ESSO Cup with 16 age-eligible players on their roster.

As the host team at the 2008 westerns, Slash finished fourth in the five-team draw.

"The year with the westerns we were sort of a .500 club type of thing. We were eliminated early in the [AMMFHL] playoffs," Sydor said. "You never want to embarrass yourself or the association so we expect to be a very competitive team next year and we actually see that of ourselves of this year."

In the AMMFHL's north division, the Slash are ranked second at 9-6-5. They have also qualified for the upcoming Notre Dame and Mac's tournaments.

"We had an extremely young team last year and we're young again this year," Sydor said. "We're positioned well but we have a lot of work to do and things to improve on. We need to grow as a team and as individuals."