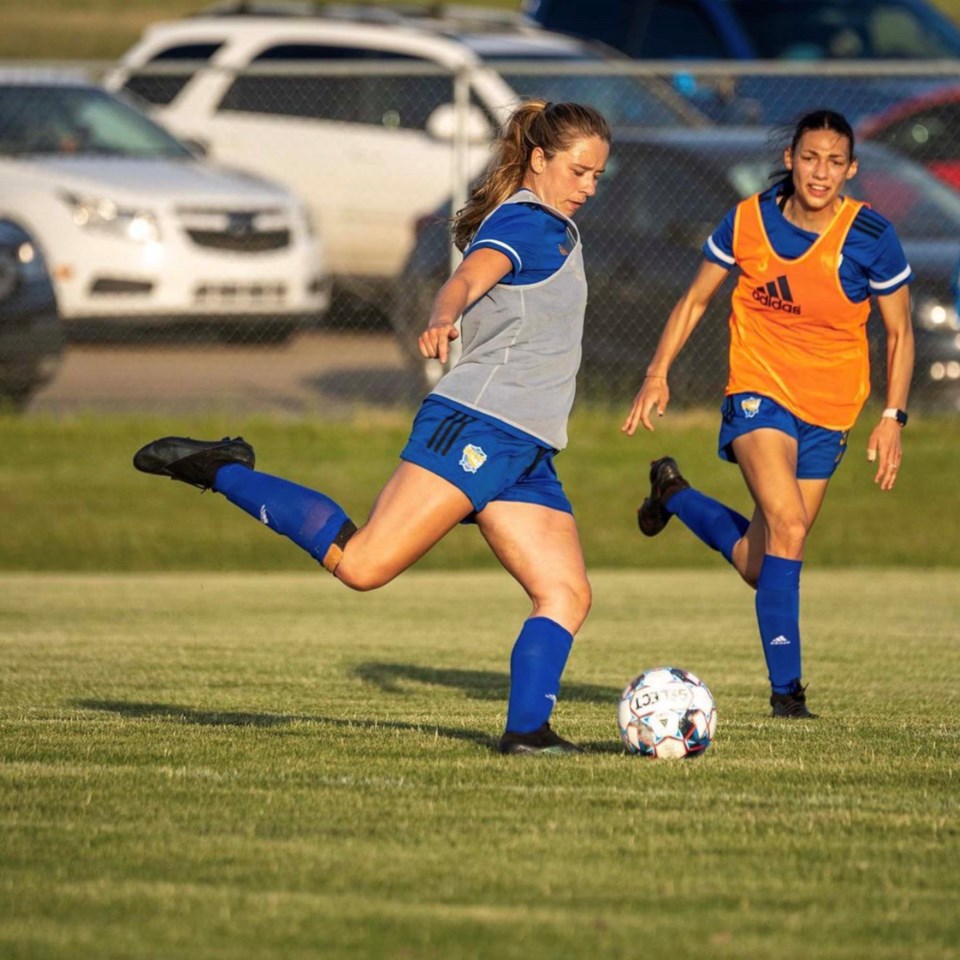 Tanya Boychuk (left) prepares to send the ball down the field in a practice with the St. Albert Impact. SUPPLIED/Photo

Get ready to welcome the newest high-end sports club to the city. The St. Albert Impact has joined one of the highest-ranking pro-am women’s soccer leagues in North America. The United Women’s Soccer (UWS) league spans across both the United States and Canada and the Impact is the newest addition to the league.

The addition of the Impact marks just the second Canadian team to join the league. The other team is located in Calgary.

The team officially joined the league back in January. The move was spearheaded by Troye Flannery, the former head coach and general manager of the Calgary Foothills UWS team. Flannery joined the St. Albert Soccer Association in October of 2020 and immediately saw the potential the association had in bringing a high-end soccer team to the community.

“A few weeks into the job, just after meeting with the board of directors and getting a lay of the land with respect to infrastructure and volunteer opportunities, I said to our executive director that we could possibly get a UWS franchise,” said Flannery. “He jumped all over it and agreed and the next step was to reach out to Canada Soccer.”

They initially met with some bad news from Canada Soccer. They had missed the deadline for cross-border play. Yet a glimmer of hope arose as they offered Flannery a 24-hour deadline to get things approved.

“Out of respect, Canada Soccer gave us 24 hours to put something together, so the first thing we did was reach out to the league,” said Flannery. “I have a long-standing relationship with the UWS from my experience in Calgary … We submitted our business plan and our plans in respect to the infrastructure and then the next step was to convince our board of directors to give it a go.”

It was a mad dash to meet the deadline, but Flannery and his team were able to pull it off. With the paperwork approved and with the UWS and both Alberta Soccer and Soccer Canada signing off on the expansion franchise, it was official: the St. Albert Impact was coming to the UWS.

“I don’t think Soccer Canada could believe it, but we pulled it off in 24 hours,” said Flannery. “We went to their annual general meeting and they gave us the thumbs up.”

The development was a major win for both Flannery and St. Albert. They had recognized a great need for girls in the community to have more opportunity to succeed in sports and Flannery said he hopes girls in both St. Albert and the surrounding area can look up to the Impact for inspiration.

“The men have all these opportunities at pro levels, why can’t the women,” said Flannery. “I think if you are a young female sitting on the stands on match day there is some pretty high-end talent and the standard is exceptional,” he said.

“We have Canada’s U20 captain on our team. We’ve got multiple players who have been university stars, multiple players that have won national championships at other levels but, beyond all that, some really good people.”

The U20 captain Flannery mentioned is none other than Edmonton’s own Tanya Boychuk. She has been playing soccer since she was four years old and is currently one of the premier players for the University of Memphis. Her career has taken her across the world from Australia to Mexico, but the prospect of coming back home to play for the Impact excited her.

“The Impact has created a great opportunity for players to come back and still be able to train,” said Boychuk. “I moved back home and playing for my home city is super exciting.”

“I haven’t played for my hometown for a good five years, so to have my whole family, my grandparents, and all my friends (here) is a good opportunity. I hope that there is going to be a big turnout because it isn’t just St. Albert but all of Edmonton as well (that we represent).”

Boychuk plans to return to Memphis at the end of the UWS season, but that doesn’t mean she won’t be motivated to make some noise for St. Albert. She said the team has become tightly knit and they can’t wait to show what they are made of ahead of their July 2 opener against Calgary Foothills.

“I can’t wait. Honestly, I have been waiting for (July 2) for a long time, especially since we are playing Calgary where there is a big rivalry no matter what you’re playing,” said Boychuk. “We are very ready. We have been training a lot the past couple of months and it’s exciting because the team is very close. We hang out outside of soccer and have that bond off of the field.

“We have great coaching staff and support to help us get to where we want to get to, so we are very excited to get things started.”

Flannery said he hopes the team will be able to cross the border to play teams in the United States. With the Alberta lifting all public-health restrictions July 1, it seems the notion of playing internationally might be more realistic now than it has been in more than a year.

“Right now the borders are still closed, so we are working on being deemed essential and/or an exemption,” said Flannery. “In terms of spectators, based on the current Alberta health guidelines, spectators are free to come and are encouraged to wear masks and sanitize their hands, but we are business as usual based on all of the things that have changed here in society relating to the pandemic.”

You can cheer on the SASA Impact in their inaugural UWS season-opener on July 2 as they take on Calgary Foothills at Riel Park. Kick-off is slated to get underway at 7pm MTN. For more information relating to the Impact you can visit their website at StAlbertSoccer.com or the official website of United Women’s Soccer at UWSSoccer.com.