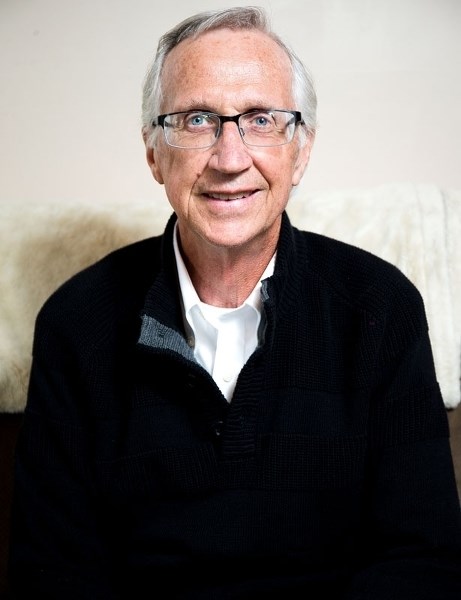 Joyal Way is a street paved with St. Albert history.

The stretch of road in the new Jensen Lake neighbourhood honours not only the contributions of the Joyal family to the community but is also a fitting tribute for Eddie (The Jet) Joyal, a former NHL player who learned to skate like the wind on the Sturgeon River.

“It’s a very nice gesture but it’s a family deal,” Joyal, 75, told the Gazette Thursday after arriving from his home in San Diego, where has lived for more than 30 years.

“The mayor (Nolan Crouse) I would imagine had a lot to do with it and I appreciate it. I know my family is very, very pleased about it. It came as a real surprise but it’s really neat.”

Joyal’s grandfather, David, was the town constable for St. Albert in 1910. David and his wife, Emma, had a son, Charles, who with his wife Mary owned a general store.

“It was right downtown, right next to the Sturgeon River, and we lived in the back. It was a tough go for them. They had eight kids to look after and then my father died when I was eight or nine years old so my mother raised the eight kids,” Joyal said. “They would be really shocked if they were here to see this and my brothers Frank and Dave have both passed away and they would be very excited too.”

“When I wasn’t old enough to go to school my older brothers would go to school and at the time my mother couldn’t afford skates for me so I used to take my next brother’s skates. I had a little path that I could go out from our back door and just rolled down to the river. I had my own little rink down there that I cleaned out. My mom used to watch me through the window and I would skate there all morning and she would say, ‘Well, you just make sure you get your butt home before he gets home from school because he’s not going to like you using his skates,’” Joyal said.

“I learned to skate really well on the river. We used to go from the bridge downtown at night and we would skate all the way up to the Big Lake and all the way back and we would’ve went again but we had to be home because it was getting dark.”

The journey to the NHL was a long and winding road travelled by Joyal.

“I started playing in the city when I was 11 or 12 years old, mighty mites, and I can remember catching the bus, they had one bus, and I would be dragging my equipment down to meet the bus and get on the bus and go to the Greyhound bus station in the city and get on another bus to the rink. We played at the Gardens and it was really a big thrill to play there. Wow, it really was,” said the Maple Leaf Athletic Club alumni. “I would do that all by myself. Sometimes they would give me a ride home, the manager or the coach, but usually I had to take the bus back so it was a pretty big deal for a kid that young.

“But I never ever excelled at school because of the hockey. I was just crazy for hockey.”

“I was pretty proud of myself. I looked back to when I was a kid, I had to do all that by myself with the equipment and then I started opening some people’s eyes in Edmonton and then they would drive out to pick me up. I guess I was getting a little better every year,” said Joyal.

The sleek centre joined the Oil Kings in 1958 and scored 84 points in two seasons of junior, including 16 goals and 38 points in 23 games during the team’s 1960 Memorial Cup run that ended with a 4-2 series loss in the best-of-seven final against the St. Catharines Teepees. He racked up 22 goals and 36 points in 22 playoff games.

After signing with Detroit, Joyal ranked seventh in league scoring with 37 goals in his second season with the Flyers in 1961/62. In the playoffs, he led the team with 10 goals in 12 games and his 18 points tied him with Len Lunde for tops on the Flyers, who defeated the Spokane Comets in seven games in the final.

“The old Edmonton Flyers, that was a lot of fun. We won a championship in Edmonton and that was a good experience,” Joyal said. “From Edmonton, I went to Detroit when I was 18 or 19 to my first training camp. I was still in school, and I took time out from school to go to training camp.

“With the juniors, we had them long road trips in the Iron Lung they called it, the Greyhound bus, and I used to go all the way up to Flin Flon, Manitoba. We would come back home and then have to get up and go to school. It didn’t work too good for me.”

The next season, Joyal played 54 games with the Pittsburgh Hornets in the American Hockey League, plus 14 league games and 11 more in the playoffs for Detroit. He led Pittsburgh with 29 goals and 56 points in 54 games in 1962/63 and added two goals and 10 points in 14 games with Detroit before scoring once in 11 playoff games as the Red Wings lost the final to the Toronto Maple Leafs in five games.

It was the start of a 466-game NHL career that included stints with Toronto, Los Angeles Kings and the Philadelphia Flyers. During that span, Joyal registered 128 goals, 262 points and only 103 penalty minutes. He also tallied 11 goals and 19 points in 50 playoff games.

Joyal was dealt by the Kings, along with Bill (Cowboy) Flett, Ross Lonsberry and Jean Potvin, to Philadelphia for Serge Bernier, Jim Johnson and Bill Lesuk on Jan. 28, 1972.

“I wasn’t a great hockey player. I was up there and had a cup of coffee and had a good time but it was great,” said Joyal, who also spent time in the minors with the Rochester Americans in the AHL and Tulsa Oilers in the Central Professional Hockey League and reached the finals with both teams.

“We beat Toronto 2-1 in Toronto and that was a pretty big deal for me but we didn’t win the series. We should’ve won that series but we blew it.”

It was with the Kings, who claimed Joyal in the expansion draft after a 32-goal, 83-point performance in 70 games, plus 10 goals in 13 playoff games with Rochester in 1966/67, when he was tagged with the Jet moniker.

“That was Mister Cooke (the owner) in Los Angeles. I don’t know where he got the idea that I was a Jet. We used to have races in training camp in L.A. and I never came in better than fourth in the races,” said Joyal, who produced 105 goals and 204 points in 319 games during four and a half seasons with the Kings.

Joyal led the Kings in points in his two seasons and also assisted on the team’s first goal, scored by Brian Kilrea in October of 1967.

The Eddie Joyal Award is also presented to the player by MayorsManor.com who leads the Kings in pre-season points.

Joyal closed out his pro career with the Edmonton Oilers in the World Hockey Association. The Oilers chose Joyal in the 1972 general player draft, just a few months after his NHL retirement.

In the first regular-season win for the Oilers, Joyal skated on the Geritol Line with Val Fonteyne and Bill Hicke in the 7-4 win over the host Ottawa Nationals. His last season was 1975/76 and in 45 games collected five goals and nine points for a WHA career mark of 57 goals, 112 points and 26 penalty minutes in 239 games.

The Oilers will honour Joyal at Sunday’s game against the Colorado Avalanche as part of the team’s year-long celebration of their alumni during the final season at Rexall Place.

“The Oilers, that was the first four years under Bill Hunter before they got into the NHL. That was another very good learning experience,” Joyal said. “We used to fly in our own airplane. We were so proud of it. It didn’t get too high up in the air and we used to ride around in that thing and we thought it was great. We used to fly over Winnipeg and we used to have to gain altitude so we wouldn’t hit any of the buildings. We never got too high up in the air. It was kind of bumpy.”

The next Jet in the Joyal family is his three-year-old grandson, Owen. The scouting report on Owen is that he has a wicked slap shot.