Sturgeon Spirits one win away from playing in Tier III Alberta Bowl final
Nov 16, 2019 8:30 AM By: Jeff Hansen 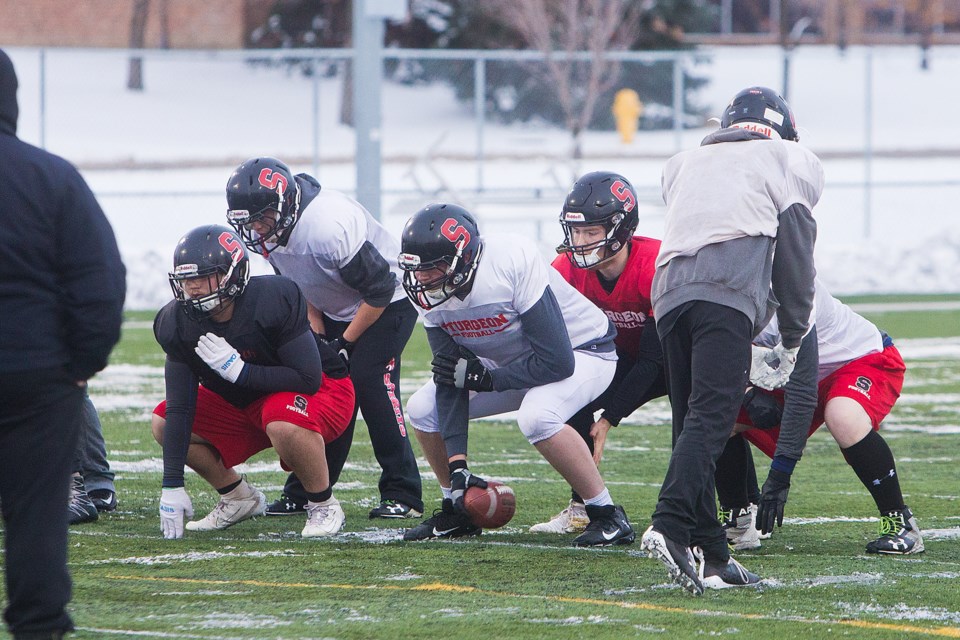 HUDDLE UP – The Sturgeon Spirits practised Tuesday at Larry Olexiuk Field in preparation for today's Tier III (450 to 749 students) provincial north final against the Holy Rosary Raiders of Lloydminster. Kickoff is 12 noon at the Border City against the winner of the last four north finals. The northern rep advances to the Alberta Bowl next Saturday in Raymond against the Cochrane Cobras, the provincial champions five years in a row, or the Crescent Heights Vikings of Medicine Hat. Sturgeon, 8-2 in exhibition, metro Edmonton league and provincial action, is competing in its first provincial playdowns as a second-year football team. CHRIS COLBOURNE/St. Albert Gazette

The Sturgeon Spirits have a puncher’s chance of knocking off a heavyweight contender for the Tier III title in today’s provincial playoff at Lloydminster.

The second-year team goes toe-to-toe with the Holy Rosary Raiders for a shot at the Alberta Bowl championship. Kickoff is 12 noon at the home of the Raiders.

By beating the winners of the north final the last four years, Sturgeon would be in elite company with the 1990, 1992 and 1997 Tier I Storm and the 2011 Tier III Skyhawks as the only teams from the St. Albert football fraternity to compete in the Alberta Bowl.

“It’s a pretty big feeling where we're at right now,” said Marc LeBlanc, a Grade 12 slotback and safety, prior to Tuesday’s practice at Larry Olexiuk Field. “It’s our first year to qualify for provincials and the fact that we made it this far is pretty awesome.”

“It definitely gave us a confidence boost going into the next round because we now know we can actually compete at this level too. We’re the real deal now,” LeBlanc said.

The northern rep will line up against the Cochrane Cobras or Crescent Heights Vikings of Medicine Hat in the Alberta Bowl next Saturday at 12:30 p.m. in Raymond.

Cochrane is the undisputed Tier III champion five years running and the last four provincial victories were against Holy Rosary.

“Those are Tier III powerhouse teams,” said Chad Hill, head coach of the upstart Sturgeon squad, 8-2 overall in exhibition, metro Edmonton league and provincial action. “We want to be just like them and the boys are excited to have the opportunity to play against a very good team like Holy Rosary in such a big game.”

The north semifinal for Holy Rosary was 24-5 against the No. 2-ranked Sylvan Lake Lakers (8-1).

Holy Rosary, who vacated two wins having played with a player later deemed ineligible, is the Wheatland league runner-up for two consecutive years and the second loss in the final against the Lloydminster Barons, the 2018 Tier II Alberta Bowl champions, was 13-8 in late October.

“Although Holy Rosary is not identical to Paul Kane schematically, they are very similar on offence so we’ll use some of the game plan we had for Paul Kane (in the 28-7 pool A loss in league play). Hopefully we’ll implement it a little bit better against Holy Rosary than we did against Paul Kane. We struggled with Paul Kane the first week of the season,” Hill said.

The loss started a chain reaction as Sturgeon racked up six straight wins, highlighted by the most important result in the team’s short history – 25-17 over the ballyhooed Skyhawks that put the Spirits in the driver’s seat to represent metro Edmonton in the Tier III provincials – as well as the 39-6 playoff pounding of the 2018 Miles conference champion Archbishop Jordan Scots before falling short in the 29-14 semifinal against the Leduc Tigers.

“We feel we didn’t play our best football the last time we were on the field against Leduc so it was a long time (14-day layoff) between games to try and get some redemption and a bunch of the boys were pretty eager to get on the field against the Cats and do a little bit better than what we did last time,” Hill said.

Sturgeon and the No. 6-ranked Cats (4-5), semifinalists in the Mighty Peace league, traded touchdowns in the first quarter before LeBlanc’s basket catch in the endzone on quarterback Zach Froese’s fireball gave the Spirits the lead they wouldn’t relinquish.

“I was running a corner route and I looked back for the ball and I didn’t see it until the last second so I just kind of threw my hands down and it landed right there,” said LeBlanc of the second-quarter go-ahead TD. “It was pretty awesome. It was a good feeling.”

Sturgeon led by 20 points before the Cats scored an unconverted TD late in the contest.

“The defence stepped up pretty good after they scored that first touchdown (to make it 7-7) and shut them out until the last bit of the game,” said LeBlanc, one of 19 returnees from Sturgeon’s 6-2 inaugural campaign that ended as division three Gilfillan conference finalists.

“We’re just like last year’s team. We're pretty competitive and we like to play for each other,” said LeBlanc, 17.

Hill was impressed by how Sturgeon adapted to the skating rink of a field in Whitecourt – the game was moved to Monday from Saturday because of the weekend dump of snow – while tackling the first provincial game in team history.

“What I’m most proud about the boys is persevering in the tough field conditions. It’s no fault of the Cats, they were tremendous, tremendous hosts, but the field conditions were as bad as I’ve ever seen it and I've seen some bad fields, I played in the old days where there wasn’t artificial turf,” said Hill, who still shakes his head in dismay over the snow-covered Grande Prairie field in the 1996 Tier I semifinal, and even worse officiating as a pint-sized Grade 12 Storm linebacker in the 24-14 loss to the hometown Warriors.

“I hate using the term finesse offence, but we're a bit of an aerial team because we like to spread things out, throw the ball and run perimeter and that’s harder to do in those field conditions so credit to our boys because we actually showed that we could run the football, we could get behind our offensive line which was getting pushes and we could sort of ground and pound, which is the first time this year we’ve been able to do it.”

Hill gave props to the O-line for soldiering through the loss of centre Nate Gibbons with a lower body injury on the team's first drive.

“Credit to Carson Antoniuk for stepping into the offensive line for the first time all season. He’s undersized. He’s a linebacker/fullback type kid, but he went in there and played O-line. Josh Spiker. Nick Haasz, Karl Haasz are some undersized guys too. Connor Wietzel, in his first year ever in football as a Grade 12, is more than holding his own against some good competition. Liam Thompson is another rookie on the O-line who has contributed,” Hill said.

“Our offensive line is not exactly what you would picture as being a dominant line, but they got the job done. It’s the best they’ve played all year and credit to our young offensive line coach Nick de Champlain. He’s done a real good job in getting multiple players ready to go on the O-line and contribute and on a tough field surface like that they dug deep for the guys carrying the ball like Froese and our little 130-pound rookie running back who runs hard in Rylan Seewalt. Kalem Stuermer (a standout linebacker), in the first quarter before he went down (with an injury) also got some hard yards for us (plus a key first down on a fake punt that set up his two-yard TD to open the scoring).”

The star of the show in Whitecourt was Froese. The Grade 12 quarterback, who also doubles as linebacker, spread the ball out for pivotal completions to LeBlanc, Will Campbell and Kyle Phillips while also piling up the rushing yards and two TDs.

“Zach was the real difference maker,” Hill said of the last year’s Gilfillan conference MVP who signed a letter of intent with the Alberta Golden Bears. “Obviously people have to account for Zach’s arm, but he was just tremendous using his legs in carrying guys and breaking tackles.

“It was very, very obvious in that game that Zach has talent to play beyond high school and he showed that.”