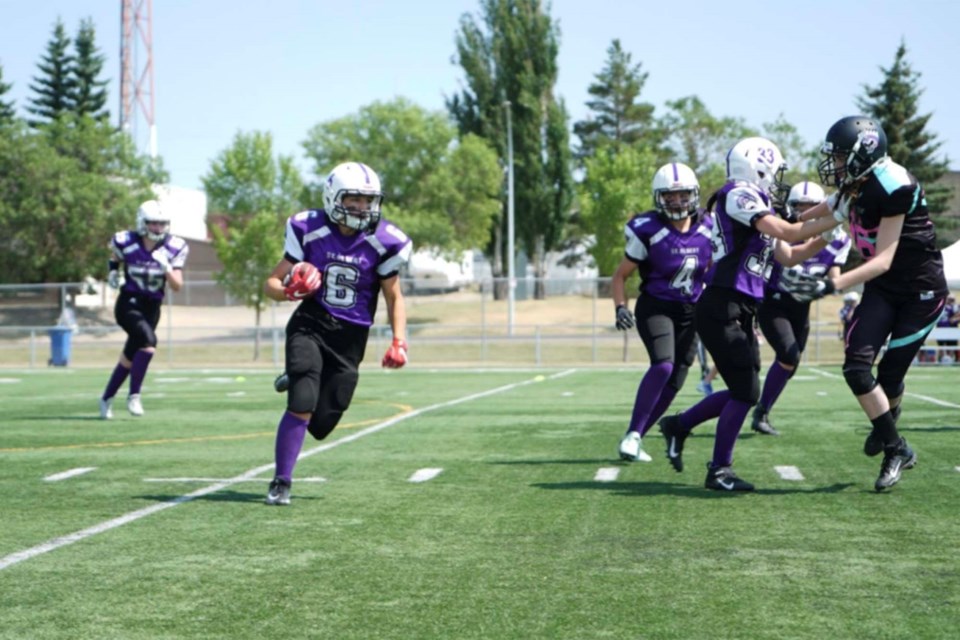 A St. Albert Valkyrie player makes a break for the end zone in a game against the Fort Mackay Northern Spirits at Larry Olexiuk Field on July 10, 2021. PRESTON HODGKINSON/St. Albert Gazette

The St. Albert Valkyrie girls' football club closed out their 2021 spring season with a three-game jamboree at Larry Olexiuk field on Saturday. The day started off with intense heat throughout the first two games, then quickly transitioned into stormy weather. Nerves were high around the day potentially being cut short, but the teams battled through to make it a successful day of football.

“We had to basically amalgamate our senior and junior teams into one team and there is a Football Canada guideline that says there has to be a minimum of four days between full-tackle games, so that’s why we had to combine the two tackle games into one jamboree-style day,” said Richer. “It was round-robin between the three teams that were there”

St. Albert was up next in a game against the Northern Spirits. The Valkyrie were able to score on their first two possessions and were a brick-wall on defence. They walked off the field with their heads high with a 18-6 victory in their pockets.

The last game of the day saw the Valkyrie take on the Raiders. They gave it their all, but it was the Raiders who would come out on top with an impressive 18-0 shutout victory over St. Albert. The win cemented the Raiders as the jamboree winners while the Valkyrie came second and the Northern Spirits came in third.

As mentioned, the day was almost cut short due to weather concerns. The heat wave cancelled their previous event in late June. This time it was the storm clouds that threatened a premature ending to Saturday's games.

“We got a little nervous. I actually thought for a bit that we were going to get hit with a tornado, to tell you the truth,” said Richer. “The winds picked up and it took a couple of our tents off and away ... it was only scary for about five minutes and then slowed right back down.”

It was a day filled with emotion for both players and coaches. This marked the end of a few players' minor football careers and it was not the year most had hoped for, as COVID cut things a bit short. Despite this, Richer said he is proud of what the association accomplished and he has hope for the future of the girls' division.

“This year we had five girls that were on (the original midget girls' team) three years ago and this is their last year of eligibility,” said Richer. “It was a little bittersweet and emotional, especially for some of those graduating players ... but as I told the girls, we got more than most.

“We have such a great core of young and returning players to build around a foundation going forward, so St. Albert, for girls football, is in good shape and I am happy that our graduating girls got to have some kind of season.”

The next big project for minor football is to get their fall season up and running. Richer said they plan on having two midget teams, two peewee teams, and two atom teams ready for the season. Registration is open until the first week of September, but parents can jump on an early-bird offer to save money if they sign up before August.