The journey of a lifetime for wheelchair basketball player Arinn Young is competing for Canada at the Rio 2016 Paralympics. “It’s honestly the hardest road I’ve ever taken in my athletic career so far.
Jun 8, 2016 12:00 AM By: Jeff Hansen 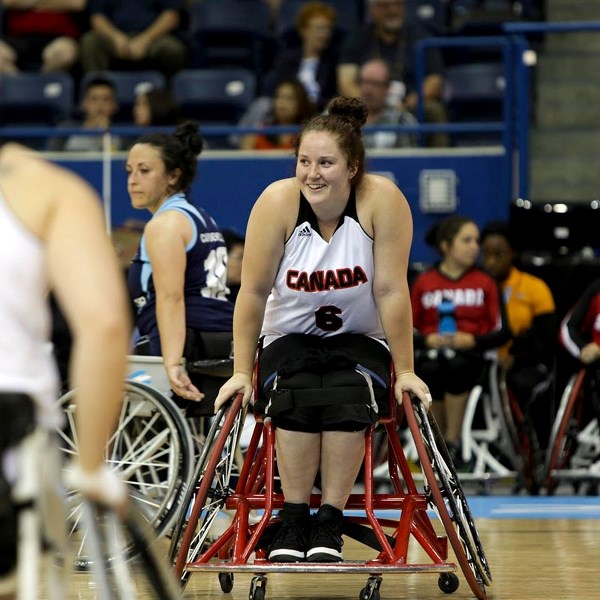 The journey of a lifetime for wheelchair basketball player Arinn Young is competing for Canada at the Rio 2016 Paralympics.

“It’s honestly the hardest road I’ve ever taken in my athletic career so far. It’s like non-stop basketball, basketball, basketball and then I sleep about and think about basketball. I’m constantly wanting to be the best player I can be leading up into Rio and in Rio so I can help my team possibly having a medal in our hands,” Young explained.

“From where I first started to now, I can’t believe how much my life has changed in a positive way and I’m just really happy with how my life is going. I’m in a really good place,” said the Legal resident, who played her high school standup basketball with the Morinville Lady Wolves.

Young, 19, is over the moon about wearing the Maple Leaf at the 15th Summer Paraylmpic Games, a multi-sport event for athletes with a disability, Sept. 7 to 18 in Brazil.

“I’m so excited. It’s been a dream of mine since I was injured and even when I was still playing standup I even told my coach (Kent Lessard of the Wolves) one day I was going to be in the Paralympics. He kind of just like laughed it off and was like you’re joking and I was like, ‘No, I’m going. It’s a real thing. It’s a pretty big deal,’” said Young, who had several knee operations before switching from standup to wheelchair basketball in 2011.

The five-foot-eight hoopster is classified as a 4.5 player (minimal disabilities and can walk normally) on the court.

“My role is to bring my teammates up, give them a boost and confidence and energy on and off the bench, and when I do get to see the court come out with everything I’ve got and show the world what Team Canada is all about,” said the youngest member on Canada’s 2014 world gold-medal winning team.

Young, nicknamed Juice, is the only Albertan and one of six Paralympic newcomers on the 12-player roster for Rio.

“Our strength is confidence and how we play with one another and definitely team cohesiveness,” she said. “We all bring out the best qualities that we can in each teammate when we’re playing.”

Not even the Zika virus can stop Canada, ranked first internationally based on results from the 2014 worlds, from challenging for its first medal since bronze in 2004 in Athens.

“We have a really great medical staff that have given us everything we need to know about the virus,” Young said. “We’ve got the OK to go there and play the best basketball we can play.”

Canada qualified for Rio at last year’s Parapan Am Games in Toronto as the silver medallists. In the final, Canada lost to the undefeated United States 80-72 in the final to finish 4-1 overall.

“My role in the gold-medal game was to disrupt their offence and defence and my goal leading into the Paralympics is basically do the same thing and be a big and do what a big does, which is score points and push the ball up and be that threat that you need to be and that’s what I’m planning on doing.”

Leading up to the Parapan Am Games, Young recorded four consecutive double-doubles for Canada (2-5) at the second annual Women’s U25 World Championship in Beijing. She was the co-leader in points with 24 and grabbed 10 rebounds in the 61-43 loss to China (4-3) in the bronze-medal playoff.

Young was coming off a season in Toronto studying psychology at Centennial College while training at the Wheelchair Basketball Canada National Academy at the Pan Am Sports Centre in Scarborough, Ont.

After the Parapan Am Games, Young attended the University of Alabama in Tuscaloosa and played on the women’s wheelchair basketball team.

“It’s improved me a lot. I had to play literally all the minutes at Alabama and I had to be that person that takes that last-second shot in a game,” said one of three Canadians on the team. “It’s changed my confidence. I’m not scared to shoot, I’m not scared to back-pick people and I’m not scared to get the foul. I’m just not scared anymore compared to my first time being on Team Canada.”

Alabama placed third overall at the college nationals and Young was selected to the all-rookie and first all-star teams.

“I wasn’t really expecting any of those awards but I was really honoured,” said the exercise and sports science student who has four years of eligibility remaining at Alabama.

“I want to improve more by being there,” said the tournament all-star for the second-straight year at the Canadian Wheelchair Basketball League championships with the Edmonton Inferno, silver medallists this year after winning gold in 2015.

“What I’ve improved on the most is definitely my nerves. When I first started on Team Canada, I would get called up to be on the court and I would be so nervous and my heart rate would be like almost at 200 and now when I get called up on court I’m like, ‘Yeah, I’ve got this. I’m not worried. I can do my thing,’” Young said. “I feel that comes from playing a lot of minutes in Alabama and my scoring too. I’m not scared to shoot the ball anymore. I have the trust of my teammates. If it’s a good look and I think it’s a good look I’m going to shoot the ball.”

The Canadian lineup for Rio is currently in Colorado Springs for the United States women’s international friendly competition, featuring Brazil, China and the Americans, before returning home for centralized camps at the national academy at two or three week stints at a time before Rio.

“We’re together a lot this summer but it’s worth it. It’s all about Rio,” said Young, the female MVP at the 2014 junior nationals with Team Alberta.