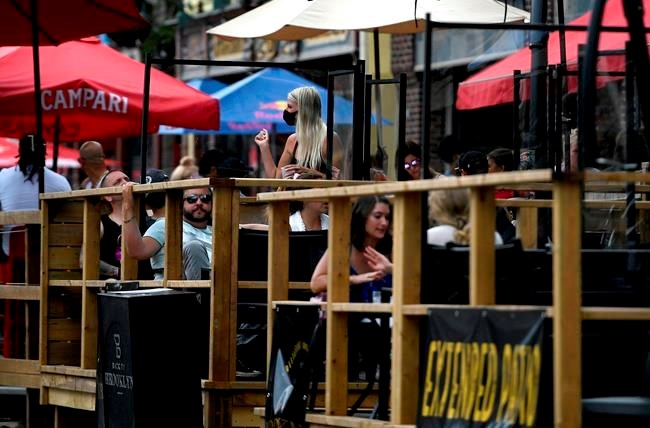 TORONTO — As the weather gets cooler and COVID-19 cases start to surge again, more and more Canadians are looking to extend patio season by adding a heater to their outdoor space.

The demand for patio heaters has risen so much that retailers have been struggling to keep them in stock, according to the Retail Council Canada.

The council's vice-president of public affairs, Kal Littler, said the products "have been flying off the shelves," with demand coming from both commercial and residential customers.

Catherine Miller Mort of Toronto said she bought a patio heater for her home to allow her kids to play with friends outside during colder days.

“We want to be able to extend that enjoyment through the fall and into the winter if we can, and I know we’re not gonna be comfortable doing that inside,” said Miller Mort.

She said she looked for a patio heater at several retailers but took some time finding one.

"A lot of the smaller and electrical models that I looked at and were not as expensive were sold out at a lot of places," Miller Mort said.

One of those retailers, Home Depot Canada, told The Canadian Press it has seen increased interest in outdoor heaters, fire pits and fire tables.

Haw said Home Depot saw the most significant increase back in May or June, when COVID-19 lockdowns had just started, and again in September, “as customers look to extend the season and remain outdoors.”

Canadian Tire also said it is anticipating that Canadians will be looking for ways to extend the season with help from outdoor heaters, barbecues and charcoal.

But the demand for patio heaters is not just coming from homeowners. There is also a big demand for them for commercial spaces such as bars and restaurants, according to Littler.

"Anything they can do to lengthen the (patio) season in which they can be open is a big deal," said Littler.

The City of Toronto announced Friday that it is allowing portable heaters in all outdoor patios, including curb lane closures for its CafeTO program, to help restaurants keep their outdoor dining spaces open.

This report by The Canadian Press was first published Sept. 16, 2020.

This story was produced with the financial assistance of the Facebook and Canadian Press News Fellowship.