At The Turn: Practice, persistence pays off in golf's Parkinson Project 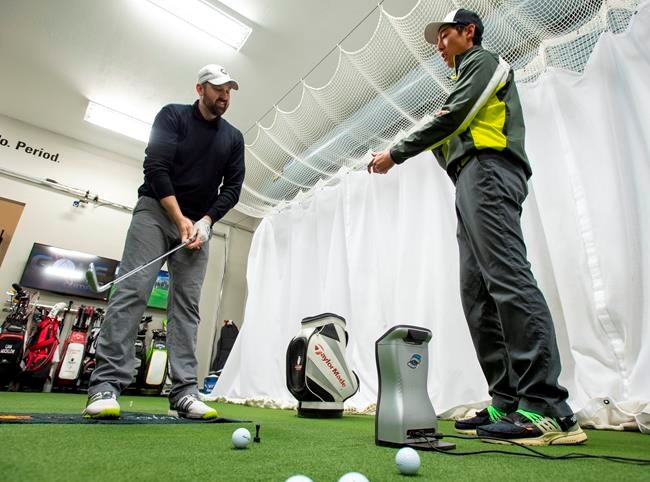 CHATSWORTH, Ont. — Seeking solace in enormous homemade cheeseburgers, coolers of cold beer and handfuls of Advil, eight old friends were nursing their wounds from the day's 36-hole marathon, the midway point of an annual three-day golf grudge match in southern Ontario known as the Chatsworth Cup.

Matt Parkinson was resting his aching joints on the couch when a rival sidled up, presumably to throw some sand-wedge shade. Instead, however, came a compliment the typical weekend golfer rarely hears: "Your game has improved 100 per cent over last year."

In golf, that sort of thing doesn't happen by accident.

Parkinson, 37, is the long-hitting, control-challenged subject of the Parkinson Project — one golf-crazy new parent's long-term effort, documented by The Canadian Press, to build a more respectable, technically sound game around the ever-present perils of age, injury and Father Time.

Last winter, he enlisted the help of The Golf Lab, the high-tech year-round teaching facility at King Valley Golf Club north of Toronto, to diagnose his tendencies, identify his specific swing and equipment faults and help chart a course to lower scores and more fun, preferably without a rigid, family-unfriendly practice regimen.

"My big push slice is gone, which was like my biggest issue ... that's gone now, which is kind of awesome — I've got a better understanding of my misses and what happens, what breaks down," Parkinson said in a recent interview.

"I'm actually hitting the ball further, which was a side benefit that I didn't really think of coming into this."

Under the watchful eye of PGA instructor and Golf Lab director of technology Carson Hau, Parkinson has spent the last year working on developing "clubface awareness" — an umbrella term modern teachers use to describe how well players can feel and track what the face of the club is doing relative to the path on which it travels.

In golf, a straight path plus a straight face equals a straight shot. Change one or both variables by even the tiniest measure, however, and the impact on ball flight is profound: A slice results from a clubface that's open to the path at impact; a hook is what happens when the clubface is shut.

In the case of Parkinson, a burly former baseball player capable of pro-calibre clubhead speed, the most common miss off the tee was a towering, prodigious slice — "the big push-slice to planet right-town," as he calls it.

"Having mostly eliminated that miss has given me a lot more confidence off the tee, and allows me to get to better spots down the fairway or even the rough than before," he said. "That means less scrambling from the bushes and fewer reloads on the tee box."

In Chatsworth, which played out last weekend over several challenging southern Ontario tracks, including Cobble Beach in Owen Sound and Devil's Paintbrush and Osprey Valley near Caledon, Parkinson hit a few misses right, but a couple left as well — evidence of shifting swing patterns. More importantly, He kept most of his bombs in play, often hitting 3-wood or long iron well past the best driver efforts of his playing partners.

Sure, he hits the ball far, which not everyone can do. But his experience in gradually turning an uncontrollable slice right into a gentle draw left offers proof that with modest effort, time and a little knowledge, even the most stubborn swing faults can be corrected.

"I think the basic thing that most players don't understand is what creates ball flight," Hau said.

"So if they can take anything away from Matt, it's how to create the conditions to control the golf ball the way they want.... Don't hit the ball straight. Play one shape or the other. We picked the draws because he had too much spin, but most golfers have that mentality of, 'Aim straight, hit it straight, hope for the best.'"

Pros call it eliminating one side of the golf course: when you set up to hit a shot that curves one way, the chances of it going the other direction are significantly lower, making ball flight easier to manage.

"Give yourself a little bit of a margin of error," counsels Hau. "No one's perfect. That's why you never see a pro golfer hit a straight ball."

During Parkinson's initial screening, the Golf Lab put him through his paces, using state-of-the-art 3D motion-capture cameras and sensors, the K-Motion swing analyzer and a Boditrak ground force plate to fully understand his swing.

Since the hard work began in March, Parkinson — a high-level athlete in his youth — has been learning to swing the club on a more neutral plane, develop a different hand action at the top of the swing and to eliminate a slice-inducing lateral slide through impact, a common fault for bigger power hitters.

"I'm very leggy and so I ended up sliding a lot," Parkinson said. "If I can rotate through the ball off that front leg, I can turn my arms over properly as opposed to trying to flip my hands, which was always my problem."

While the 300-yard threshold is no big thing for Parkinson with a driver in hand, where the ball ends up was an open question. And, like so many other golfers, consistency and regular improvement have proven elusive over the years, particularly as marriage, parenthood and a career become priorities.

"The summer is going to be about staying composed and calm and knowing when I make a mistake," he said.

"That's what I'm most excited about — having the tools to diagnose and fix (problems) on the course, because I don't have the time to nail down a swing that I can just go out to the course any time and just be flushing the ball."