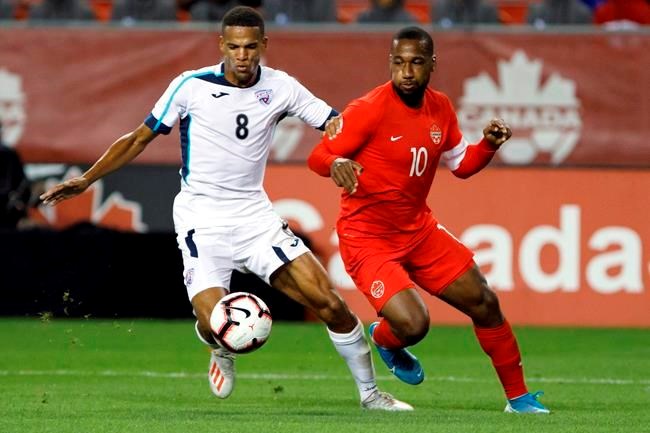 Forward Junior Hoilett, who captained Canada and recorded a hat trick in Saturday's 6-0 win over Cuba, will miss Tuesday's rematch due to family reasons, according to the Canadian Soccer Association.

Goalkeeper Maxime Crepeau (ankle) and midfielder Russell Teibert (neck), neither of whom played on the weekend in Toronto, have returned to the Vancouver Whitecaps with minor injuries. Both are considered day-to-day.

Hoilett, who plays for Cardiff City FC, has returned to Britain.

The 29-year-old from Brampton, Ont., raised his Canadian goal tally to nine in 25 appearances. He now has 10 assists, joining the retired Dwayne De Rosario as the only Canadian national team player to reach double figures in assists.

Coach John Herdman called up Montreal Impact goalkeeper James Pantemis as cover for Tuesday's CONCACAF Nations League A match against No. 179 Cuba in the Cayman Islands.

The uncapped Pantemis has been summoned by the senior side three previous times but has yet to see action. He joins Milan Borjan of Red Star Belgrade and Marco Carducci of Calgary's Cavalry FC as 'keepers in the Canada camp.

Canada, ranked 78th in the world, was originally scheduled to play Tuesday's match in Havana but CONCACAF deemed the stadium there was not suitable and moved the game to George Town, capital of the Caymans.

Saturday's win raised Canada's career record against Cuba to 8-2-3 with a 26-9 edge in goals.

With Atiba Hutchinson and Scott Arfield not with the team, midfielder Samuel Piette may captain Canada on Tuesday unless coach John Herdman elects to rotate his roster.

After Cuba, the Canadians face the 22nd-ranked Americans on Oct. 15 in Toronto and Nov. 15 south of the border to wrap up CONCACAF Nations League A play. The group winner will advance to the tournament's final four.

Canada is hoping to win the competition to preserve its hopes of cracking the top six in the region and making the so-called Hex round, the most direct qualifying route in the confederation to the 2022 World Cup in Qatar.

CONCACAF covers North and Central America and the Caribbean.