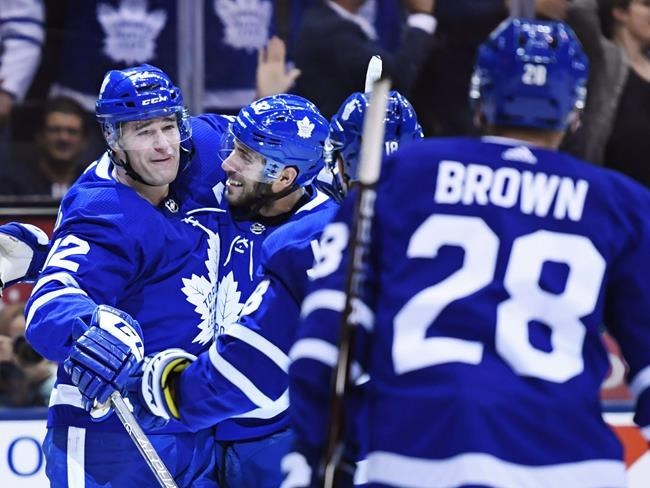 Ask one question about the Canada Games and NHL players perk up.

"It was one of the first times you get free gear," Toronto Maple Leafs veteran Patrick Marleau stated.

Buffalo Sabres forward Sam Reinhart recalled he and his B.C. teammates were so buzzed about winning hockey gold at the 2011 Canada Games in Halifax, they couldn't sleep.

"We ended up pulling an all-nighter," Reinhart said.

"It was like a mini all-star team we had come together," Kadri said.

A list of Canada Games alumni reads like a Who's Who in Canadian sport. From NHL players to Olympic and Paralympic champions, dozens experienced a Canada Games.

More than 3,600 athletes and coaches will compete in 19 sports starting Saturday until March 3. The opening ceremony is Friday.

Women's hockey made its Canada Games debut in 1991.

"To me, Canada Games I put them right there with my Olympic Games," Kingsbury said.

"To be able to play in a similar setting as the Olympic Games, representing your province, going to watch other sports, being part of a bigger team than just your hockey team is tremendous.

"That was a great experience for me," he recalled. "Being on that team and being around all those players you competed against throughout Saskatchewan, and coming together as a team ... that was probably the first group I was part of where everybody bought into a system and played it to a tee."

The typical Canada Games athlete is a teenager with little or no experience internationally.

Each sport sets its own age requirements, so the gamut runs from 12-year-old gymnasts and 13-year-old figure skaters to 21-year-old cross-country skiers and badminton players.

The common denominator is that none are on a national senior team and thus haven't competed in an Olympic Games, world championship or world university games in their sport.

For a young athlete, Canada Games combines the experience of navigating a multi-sport games, the pride of competing for your province and living in a village away from mom and dad.

Whitehorse felt very far away for a teenaged Kadri.

"That was one of the more surreal moments of my career — just being so young and going so far away to play hockey," Kadri said. "That's the farthest I'd ever travelled."

A 16-year-old Hamonic arrived at the Winnipeg airport for the Whitehorse flight to meet his Manitoba teammates competing in different sports.

"It was a charter flight for all the Manitoba athletes," Hamonic said. "We landed in Whitehorse at probably two in the morning and we just had our track suits on. It was freezing.

"I'd never been up north like that. We were all excited that we got to experience a real mini-Olympics kind of thing. You stay in the athletes' village, support the other athletes from your province."

Two-time Olympic gold medallist Le May Doan was a 12-year-old Team Saskatchewan speedskater in her first of three Canada Games — 1983 in Saguenay-Lac-St-Jean, Que.

"I have every one of my Team Saskatchewan outfits," Le May Doan said. "I've never gotten rid of anything."

Le May Doan competed in short track in 1983, long track in 1987 and in track and field in the Canada Summer Games in 1993. Equally versatile was Cindy Klassen, who won five Olympic speedskating medals in 2006.

Klassen played for Manitoba's women's hockey team in 1995 against Kingsbury, switched to speedskating for 1999 and competed in cycling at the 2001 Summer Games.

Canada Games alumni made of 34 per cent of the Canadian team at the 2018 Winter Olympics in Pyeongchang and won 11 of the country's 29 medals, according to the Canada Games society.

In addition to para-sport, the Canada Games also includes some Special Olympics sports.

"People don't realize this, but no other country in the world has something like the Canada Games," said Le May Doan, who is now a Canada Games board member.

"I don't think people understand these are your future international champions and performers. They are the ones who will represent Canada. It takes someone to go down the list of alum and go 'oh my goodness."'

The summer and winter Canada Games alternate with each held every four years.

So age and experience restrictions mean a winter-sport athlete can fall outside the window in a four-year quad to compete in a Canada Games.

A 14-year-old Mikael Kingsbury wasn't chosen to ski moguls for Team Quebec in 2007.

Four years later, he was competing in a world championship, so the reigning Olympic champion missed out on the Canada Games.

"I wish," Kingsbury said. "It would have been fun."

Red Deer will host the majority of sports in the city's venues. Freestyle skiing and snowboard will be held at WinSport's Canada Olympic Park in Calgary. Nakiska Ski Resort is the alpine ski venue.

— Josh Clipperton contributed to this story.