Canadians on court: Auger-Aliassime, Pospisil square off at Wimbledon 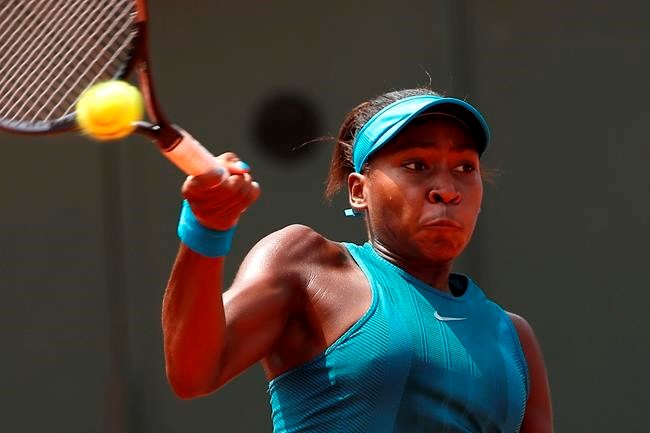 In Friday's draw, the No. 19-seeded Auger-Aliassime of Montreal was placed against a Vancouver player set to compete for the first time since October after undergoing back surgery. Fittingly, the match is scheduled to take place on Canada Day.

The 18-year-old Auger-Aliassime, who has rocketed up the rankings this year, is looking for his first career Grand Slam win in his second main-draw appearance. It's his first Grand Slam of the year after failing to qualify for the Australian Open and missing the French Open because of injury.

Pospisil, 29, is ranked 188th in the world, but has a protected ranking of 73rd — allowing him to make his return at Wimbledon.

Auger-Aliassime won his only match against Pospisil last year at a hard-court event in Indian Wells, Calif.

Top-ranked Canadian Milos Raonic of Thornhill, Ont., the No. 15 seed, faces world No. 94 Prajnesh Gunneswaran of India in the first round, also on Monday. Raonic, a Wimbledon finalist in 2016, never has squared off with Gunneswaran.

No. 29 seed Denis Shapovalov of Richmond Hill, Ont., meets world No. 74 Ricardas Berankis of Lithuania in the first round on Tuesday. The struggling Shapovalov, who has won just two of his past 10 matches, is 1-0 against Berankis lifetime, beating him last year at Indian Wells.

Brayden Schnur of Pickering, Ont., could get into the main draw as a lucky loser if a player drops out before play begins Monday.

On the women's side, Eugenie Bouchard of Westmount, Que., is the lone Canadian. The world No. 79, a Wimbledon finalist in 2014, faces world No. 59 Tamara Zidansek of Slovenia.

In women's doubles, Ottawa's Gabriela Dabrowski and Yifan Xu of China are seeded fourth. They face Ons Jabeur of Tunisia and Fanny Stollar of Hungary in the first round.

In men's doubles, Pospisil and Matthew Ebden of Australia meet Dusan Lajovic and Filip Krajinovic of Serbia in the first round.

Within the first minute of the draw ceremony, there arrived a bit of information many were wondering about: Roger Federer and Rafael Nadal were indeed set up for a potential semifinal meeting, with Novak Djokovic possibly awaiting that showdown's winner in the final.

In between, there were plenty of other things to keep an eye out for once the grass-court Grand Slam tournament begins , including the placement of Venus' younger sister, Serena, in what shapes up as by far the toughest quarter of the women's field. She might need to beat defending champion Angelique Kerber in the fourth round, then No. 1 Ash Barty in the quarterfinals.

Gauff grew up idolizing the Williams sisters, who have both been ranked No. 1 and own a combined 30 Grand Slam singles titles.

"They're the reason why I wanted to pick up a tennis racket," Gauff, who is ranked 301st this week, said in an interview posted on Wimbledon's Twitter feed. "And I met them both, and they're both super-kind people, and I'm just super-happy and thankful that they chose to play tennis."

With defending champion Djokovic in the top half of the men's bracket, he'll now only need to beat at most one of the No. 2-seeded Federer or No. 3-seeded Nadal, because they were drawn together in the bottom half.

Nadal is ranked No. 2, and Federer No. 3, but that was reversed by Wimbledon's seeding system, which takes into account grass-court results over the past two years.

The possible men's quarterfinals are No. 1 Djokovic against No. 7 Stefanos Tsitsipas, and No. 4 Kevin Anderson, last year's runner-up, against No. 6 Alexander Zverev on one side of the field, and Federer vs. No. 8 Kei Nishikori, and Nadal vs. No. 5 Dominic Thiem on the other. Nadal-Thiem would be a rematch of the 2018 and 2019 French Open finals, both won by Nadal.

The women's quarterfinals could include Barty against No. 11 seed Serena Williams or No. 5 Kerber; No. 3 Karolina Pliskova against No. 8 Elena Svitolina; No. 2 Naomi Osaka against No. 7 Simona Halep; No. 4 Kiki Bertens against No. 6 Petra Kvitova, the two-time champion who must decide whether to play after being sidelined with an injured left forearm.

At least the younger Williams, who as usual skipped the grass-court tuneup events, gets a chance to work herself into form. She opens against a qualifier, 162nd-ranked Giulia Gatto-Monticone of Italy, then could face another qualifier in the second round.

Djokovic will get things going at Centre Court on Monday against Philipp Kohlschreiber, a former top-20 player who was a 2012 quarterfinalist at Wimbledon and beat Djokovic on a hard court at Indian Wells, California, this year.

Intriguing first-round pairings men's include: Thiem against 2017 semifinalist Sam Querrey; 12th-seeded Fabio Fognini against 21-year-old American Frances Tiafoe; and Nick Kyrgios against Jordan Thompson in an all-Australian matchup, with the winner likely facing Nadal, who was upset by Kyrgios in the fourth round at Wimbledon in 2014.

— with files from the Associated Press