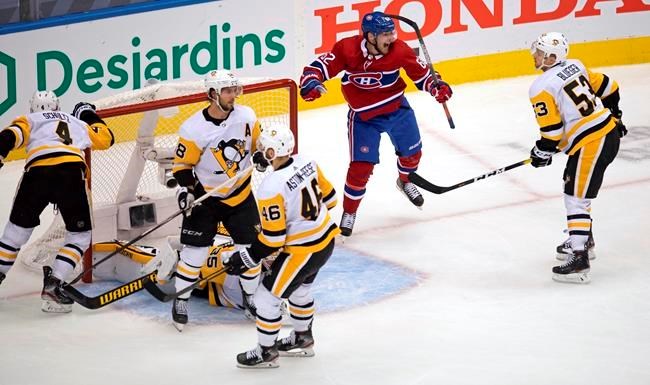 TORONTO — Barely making the cut for the NHL's 24-team return to play, few hockey observers gave the Montreal Canadiens much of a chance in the qualification round against the Pittsburgh Penguins.

The Habs used it as motivation and it paid off with a stunning upset that secured their place in the first round of the playoffs.

Artturi Lehkonen scored with 4:11 left in the third period and Shea Weber iced it with an empty-netter as Montreal blanked Pittsburgh 2-0 on Friday night at Scotiabank Arena.

Carey Price made 22 saves for the shutout as the 12th-seeded Canadiens took the best-of-five qualifier series in four games.

"I think we all took it with a grain of salt and went out there and just tried to prove everybody wrong," Price said.

After 55 minutes without a goal, Montreal took advantage of a costly turnover by Brandon Tanev in the Pittsburgh zone. Ben Chiarot pinched on the play and Tanev swung the puck into the slot.

Lehkonen corralled it and fed it to Paul Byron, who drew three Penguins to him as he skated behind the net. Byron backhanded a pass in front to Lehkonen for the one-timer past netminder Tristan Jarry.

"I just had to tap it in towards the net and luckily it found the net," Lehkonen said.

Weber's insurance goal came with 31.8 seconds left. Montreal will play the Tampa Bay Lightning or the Philadelphia Flyers in the first round.

The 12th-seeded Canadiens last reached the first round of the NHL playoffs in 2017, a six-game loss to the New York Rangers. The Penguins won their second straight Stanley Cup that year.

"Everybody was kind of counting us (out) so of course it feels good to win this series," Lehkonen said. "But it was one series. Now we've got to enjoy this for a moment and then move on."

Jarry made 20 saves in his first career post-season start. Penguins coach Mike Sullivan turned to the all-star netminder as a replacement for Matt Murray, who has lost eight of his last nine starts.

The Penguins were seeded fifth but turned in a surprisingly flat performance in an elimination game. Big guns like Evgeni Malkin and Sidney Crosby, who turned 33 on Friday, were simply shut down.

"Listen it's a three out of five and anything can happen," Crosby said. "We did some good things but we didn't do enough. Give them credit. They played really well."

The lone positive is Pittsburgh now has a 12.5 per cent chance of landing the first pick in the second phase of the NHL Draft lottery on Monday.

As the home team, the Canadiens were given the full pre-game video treatment in the fan-free arena. A Kanye West-Depeche Mode mashup provided the soundtrack for a Montreal highlight pack on the big screens.

The Penguins were aggressive at the outset and were nearly rewarded when Patric Hornqvist fired a shot from a poor angle that beat Price over the left shoulder but hit the post.

Pittsburgh was rather quiet after that and seemed to lack urgency. Montreal pressed on occasion but seemed generally tentative as well.

The Penguins had their first power play midway through the second period but seemed completely lost with the man advantage. Montreal actually had the better chances while shorthanded.

It was the Canadiens who seemed more motivated to start the third. Brendan Gallagher was sent in alone in the opening minute but he couldn't beat Jarry.

Byron sped down the left wing moments later and fired a slapshot that hit the post. Jarry followed that with his best save of the game as he robbed Gallagher with the glove after a brilliant pass from Tomas Tatar.

Weber, essentially playing every other shift, anchored the Montreal defence. With the consistent Price between the pipes, the underdog Canadiens played with determination and poise.

"Just having him back there, he's the backbone for us," Weber said. "He's so solid every night and that allows us to play with confidence and not be worried about giving up chances."

The Canadiens got the Penguins' attention with a 3-2 overtime win in Game 1. A listless Montreal effort followed as Pittsburgh pulled even with a 3-1 victory.

Jeff Petry scored his second game-winning goal of the qualifying round to give Montreal a 4-3 victory on Wednesday.

"We're believing in ourselves," said Montreal head coach Claude Julien. "We're having fun with it. I think we're enjoying the success that we're having right now but we also know that the next round will be against a top-seeded team and we're going to have to be even better.

"We have an opportunity here to grow and we can't ask for a better occasion."

Montreal entered the series with a 31-31-9 record, the worst mark of the 24 teams to make the post-season. Pittsburgh (40-23-6), meanwhile, had the seventh-best points percentage in the league (.623) when play was stopped last March due to the COVID-19 pandemic.