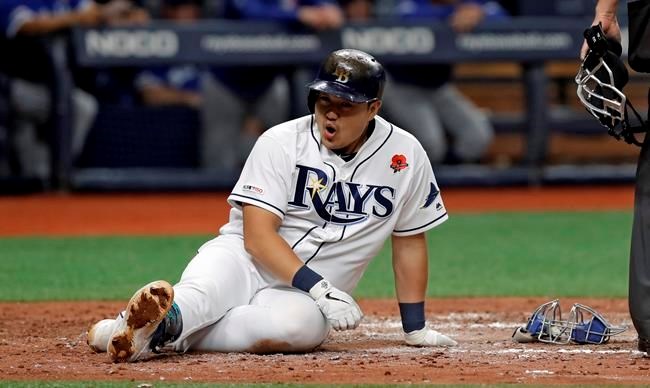 ST. PETERSBURG, Fla. — Tampa Bay's plan to use an opener was derailed by recent heavy bullpen use.

Yonny Chirinos showed that fill-in starters, even on a pitch count, can be an excellent replacement.

Chirinos was pulled after five no-hit innings and the Rays went on to beat the Toronto Blue Jays 8-3 on Monday.

"It wasn't (hard) at all," Rays manager Kevin Cash said of taking Chirinos out. "We're going to prioritize the guy's health and be responsible with them."

Chirinos (6-1) made his 11th appearance and fifth start this season. Oliver Drake relieved to begin the sixth and gave up a leadoff single to Luke Maile.

"I don't even think I knew he had a no-hitter until the fans starting booing after Drake gave up a hit," Cash said.

In addition to his starts, Chirinos sometimes comes in after an opener and is averaging five innings an outing. He struck out seven and walked two during a 69-pitch outing, one short of his projected limit.

"I've always been most comfortable as a starter," Chirinos said through a translator. "But this team has confidence in me to come in the (reliever) role and I've just got to prepare accordingly."

Austin Meadows homered and drove in three runs for the Rays, who remain two games behind the AL East-leading New York Yankees despite going a season-high 13 games over .500.

Aaron Sanchez (4-4) gave up one run and six hits before leaving after the third inning because of a problem on the fingernail on his right middle finger. The oft-injured right-hander left his start on May 17 in the fourth inning with a right middle finger blister.

"Hopefully it's nothing too serious," Sanchez said. "Obviously it affected me today. I couldn't really grip the ball, but I don't think it's going to be anything big."

Jonathan Davis hit his first major league homer that got the Blue Jays within 4-2 in the seventh.

Toronto, which has lost 19 of 26, also got a ninth-inning solo homer by Freddy Galvis.

Meadows, who had three hits, had an RBI single in the second and added a two-run homer during a four-run eighth. He has seven hits over his last two games.

Jacob Waguespack made his major league debut after replacing Sanchez and allowed Tommy Pham's RBI double and Ji-Man Choi's run-scoring single during a three-run fourth that made it 4-0.

Choi circled the bases on his hit after catcher Maile's attempt to throw him out trying to advance to second sailed into field.

Waguespack allowed three runs, three hits and struck out seven in four innings. Plans to have him finish the game were shelved because of shoulder stiffness.

Charlie Montoyo, who was on Cash's coaching staff the previous four seasons, returned to Tropicana Field for the first time as Blue Jays manager.

Blue Jays: Rookie Cavan Biggio is among those impacted by a flu bug working its way around clubhouse and was the DH. 1B Justin Smoak is also ill.

Rays: RHP Tyler Glasnow, 6-1 before straining his right forearm earlier this month, admits he was "frustrated" when moved from the 10- to 60-day IL Sunday. He resumed playing catch but now is not eligible to return until July 10. ... C Mike Zunino (strained left quadriceps) is nearing a rehab assignment. ... INF Joey Wendle (broken right wrist) is hitting off a tee and playing catch at 90 feet.

Rays CF Kevin Kiermaier took an extra-base hit away from Rowdy Tellez with a leaping catch into the wall in the fourth.

"Another day at the office," Cash said. "You get spoiled because if it stays in the park you think he's going to catch it."

Rays two-way prospect Brendan McKay is scheduled to make his first pitching start with Triple-A Durham Tuesday night. The lefty went 3-0, striking out 62 and walking nine, over 41 2/3 innings with Double-A Montgomery. He struggled offensively, hitting .167 (13 for 78).