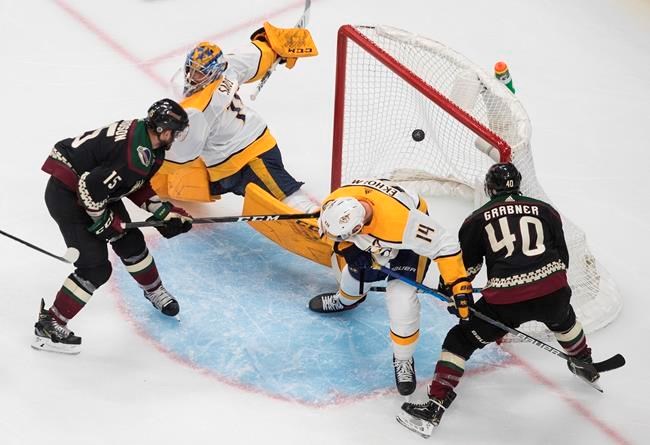 EDMONTON — The Arizona Coyotes got a reprieve when the was expanded for the NHL's restarted season, only to face the distraction of their general manager resigning right before leaving for Edmonton.

More adversity hit when Nashville sent Game 4 of the Stanley Cup qualifier series to overtime with a goal in the closing seconds of regulation.

Brad Richardson scored on a rebound in overtime, Darcy Kuemper stopped 49 shots and the Coyotes advanced in the for the first time in eight years with a 4-3 win over the Predators on Friday.

“I think we're all sick and tired of the Coyotes being out of the conversation and at least we put ourselves in that,” Richardson said.

Arizona was 11th in the Western Conference when the coronavirus pandemic halted the season, but earned a spot in the when the bracket was expanded to 12 teams.

General manager John Chayka surprisingly resigned the day the Coyotes left the desert, putting the team in a delicate spot while trying to adjust to the Edmonton bubble.

Arizona seized control of the series against Nashville by winning Game 3 and seemed to be on their way to the next round after going up 2-0 on goals by Michael Grabner and Phil Kessel to open Game 4.

Even after the Predators tied it in the second period, Jordan Oesterle put Arizona back ahead with a goal early in the third.

On the cusp of their first series win since reaching the 2012 Western Conference finals, the Coyotes seemed to be on their heels when Nashville's Filip Forsberg tied it with 32 seconds left.

Instead of panicking, the Coyotes dug down and pulled out the series-clinching victory when Richardson punched in a rebound off his own redirected shot past Juuse Saros.

Now the Coyotes, the West's No. 11 seed, move on to face Colorado or Vegas in the next round.

“Throughout the year, we've had some resiliency, a little bit of noise with this club and that's a microcosm for us being able to deal with that,” Coyotes coach Rick Tocchet said.

The Predators showed a bit of resolve of their own, rallying from a 2-0 deficit on goals by Viktor Arvidsson and Matt Duchene.

Even after Arvidsson took a puck to the ribs and left late in the second period, Nashville had a huge push in the third, tying it when Forsberg one-timed Ryan Ellis' pass from the left faceoff dot.

The Predators could not match the Coyotes in the overtime despite some big saves from Saros and bow out of the as the West's No 6 seed.

“It’s frustrating,” said Forberg, who had three goals in the series. “We played well enough to win, but we've also got to find that little extra to win.”

The Coyotes took control of the series with a 4-1 win in Game 3 behind Kuemper's 39 saves and three third-period goals.

Arizona followed a similar pattern to that game, starting slow but scoring the first goal when Grabner beat Saro to the glove side with a wrister from the right circle. Kessel took advantage of a turnover by Saros 98 seconds into the second period by slipping a shot under the Nashville goalie's stick blocker.

Nashville came back to life when Duchene scored on a power play and Arvidsson one-timed a pass from Ellis past Kuemper to tie it.

Oesterle put Arizona back ahead early in the third, but the Predators bounced back again with Saros on the bench for an extra attacker, seemingly snatching momentum away on Forsberg's late goal,

They just couldn't finish it off.

Kuemper made a couple saves in overtime and Richardson ended the series — and the Predators season — with his goal after it bounced off Nashville Mattias Ekholm following Saros' inital save.

"We just couldn’t find a way to solve Kuemper as much as we threw at him,” Nashville coach John Hynes said.

NOTES: The Coyotes were without C Nick Schmaltz due to a head injury for the fourth straight game. ... Nashville is 6-13 in elimination games. ... Arizona backup goalie Antti Raanta missed his second straight game after suffering an injury in warmups before Game 2.

Arizona will play Colorado or Vegas in the next round.