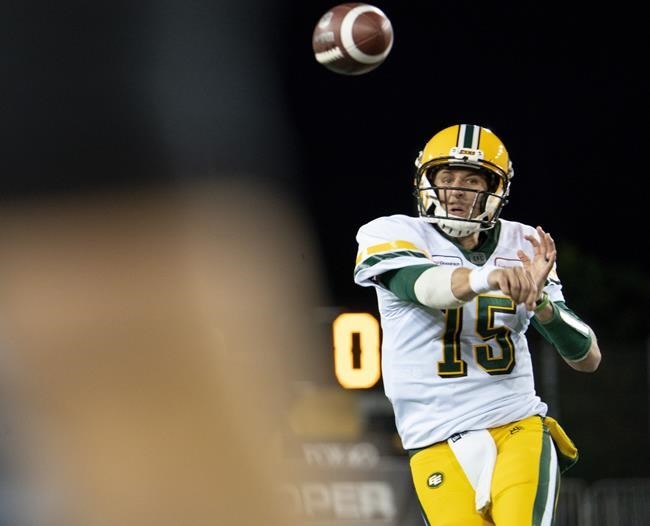 Once again, the Edmonton Eskimos will have an opportunity to pin down the CFL's final playoff spot.

Edmonton (7-8) hosts the surging B.C. Lions (5-10) on Saturday needing a tie or victory to clinch the league's last post-season berth. The Eskimos had the chance to do so last week but dropped a 42-12 road decision in Hamilton.

It's been a rough stretch for the Eskimos, who've lost five of their last six contests. Veteran Trevor Harris started three of those losses before suffering an upper-body injury that's landed him on the six-game injured list.

Edmonton is 1-2 with backup Logan Kilgore, who suffered a leg injury against Hamilton. That forced rookie Jeremiah Briscoe to see action.

Kilgore is expected to play against B.C. but running back C.J. Gable (knee) remains questionable after being injured against Hamilton. Gable needs just three yards to hit the 1,000-yard rushing plateau for a second straight year and become the first Eskimo to do so since Hall of Famer Mike Pringle (2003-04).

Receiver Greg Ellingson, who left the loss to Hamilton with a leg injury, is expected to also play against B.C. Ellingson needs 39 yards for a fifth straight 1,000-yard campaign.

The Lions come in on a definite roll, having won four straight. The latest was a lopsided 55-8 home decision over Toronto on Saturday night.

So after losing 10 of their first 11 games, the Lions are suddenly back in the CFL playoff race. B.C. starter Mike Reilly was 21-of-27 passing against Toronto for 276 yards with a career-best five touchdown passes.

That boosted Reilly's season total to 20, leaving him tied with Toronto's McLeod Bethel-Thompson for the CFL lead. Reilly also moved past Harris (3,706 yards) atop the CFL passing ranks with 3,891 yards.

But Reilly was hardly a one-man show.

John White IV ran for 121 yards on 20 carries while Bryan Burnham had eight receptions for 145 yards and three touchdowns. Duron Carter added seven catches for 90 yards and a TD.

Burnham remains atop the CFL receiving race with 88 catches for 1,300 yards and nine touchdowns. And amazingly, B.C.'s offence had the ball for over 43 minutes against Toronto, rolling up 455 total yards.

What's more, B.C. didn't allow a sack. That's noteworthy given the Lions have given up a league-high 48, one more than Toronto.

Edmonton's defence is tied with Hamilton for most sacks (46). The Eskimos had three against the Ticats, with Canadian Kwaku Boateng registering two.

At Calgary, the West-leading Roughriders (10-4) look to not only earn a fourth straight win but tie the season series after the Stampeders (9-5) secured a 37-10 win in Regina on July 6. Receiver Shaquelle Evans had seven catches for 193 yards and a TD in last week's 21-6 win over Winnipeg while Saskatchewan quarterback Cody Fajardo has gone three games without throwing an interception. The defending Grey Cup champions are coming off a 21-17 road loss to Montreal despite starter Bo Levi Mitchell throwing for 464 yards with a touchdown and interception.

At Toronto, the CFL's worst two teams square off at BMO Field. Rookie Will Arndt draws the start for Ottawa (3-11), which has lost seven straight. Veteran Jonathon Jennings will be the backup as Dominique Davis is injured and won't dress. Bethel-Thompson finished last week's one-sided loss to B.C. and is expected to start for the Argos (2-12), who'll miss the playoffs for a second straight year. It's their first game since firing GM Jim Popp on Tuesday and replacing him with former player/coach Mike (Pinball) Clemons.

At Winnipeg, the Blue Bombers (9-6) have dropped three straight and are 2-4 since starter Matt Nichols suffered a season-ending shoulder injury. Chris Streveler was 26-of-40 passing against Saskatchewan for 254 yards but also had two interceptions as Justin Medlock accounted for his team's scoring with two field goals. Montreal (8-6) clinched its first playoff berth since 2014 with last week's win over Calgary and still has an outside shot at first in the East. The Alouettes defence forced three fumbles and an interception while registering two sacks against the Stamps.

This report by The Canadian Press was first published Oct, 9, 2019.