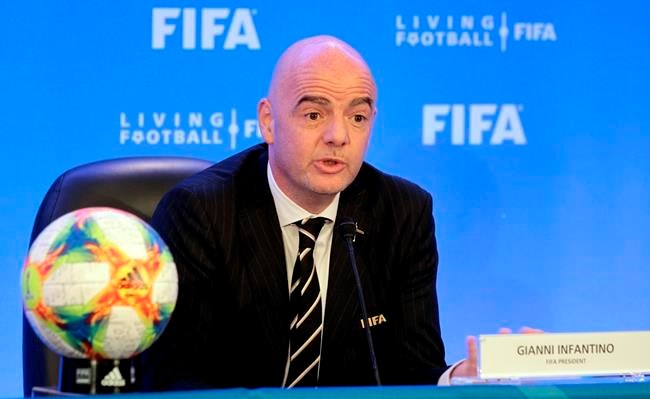 MIAMI — Concerned by political and logistical impediments, FIFA will face resistance in Qatar to attempts to expand the 2022 World Cup to 48 teams and spread games across the Persian Gulf, people with knowledge of the talks told The Associated Press.

FIFA President Gianni Infantino was given the backing of the governing body's ruling council on Friday to pursue his mission to enlarge the 2022 tournament from 32 to 48 teams, requiring at least two more stadiums in at least one additional country.

FIFA and Qatar have until June to come up with a joint proposal to present to the congress of soccer nations, but the concept is mired in complexities stemming from the blockade of Doha by , tension highlighted in a report considered by the council Friday.

During this next phase of the consultation process, FIFA will face Doha-based World Cup organizers highlighting potentially insurmountable issues involved in adding more venues outside of Qatar and hope the concept collapses, people with knowledge of the talks told the AP. The people spoke on condition of anonymity because public statements on this topic were not authorized.

While the Doha officials involved in the World Cup want to keep it as a purely Qatari event, FIFA is also negotiating on a political level — making direct contact with the country's emir, who hasn't publicly discussed the sharing concept.

Qatar is working to complete eight stadiums for a 64-match schedule. The tournament was moved from its usual June/July dates to Nov. 21 through Dec. 18 because of the fierce summer ahead and shortened to 28 days because of the interruption it causes to the European club season.

Adding 16 additional teams and 16 more games necessitate more venues. The United Arab Emirates has two stadiums with capacities over 40,000, but FIFA accepts the UAE along with Bahrain and Saudi Arabia cannot be considered unless they restore the diplomatic, economic and travel ties with Qatar that were severed two years ago.

Kuwait and Oman have remained neutral in the dispute and would be options politically, but their stadium infrastructure is lacking. Kuwait City's Jaber Al-Ahmad International Stadium has 60,000 seats but Sabah Al-Salem Stadium only 26,000. The venue in Oman identified in a FIFA study seen by the AP is the 34,000-capacity Boshar-Sultan Qaboos Sports Complex.

"We are in the lucky situation that I can speak to anyone in the Gulf region and talk just about football," Infantino said. "I don't even want to say that football might help to build some bridges or to bring people together or these kind of things. I just think that it's important for the whole region in the Gulf that the World Cup 2022 in Qatar will be a success. It is important for a region which today unfortunately is the headlines more for negative than for positive reasons."

The Gulf crisis stems from Qatar's support for extremist groups in the region, charges denied by Doha. The boycotting nations also have pointed to Qatar's close relationship with Iran.

"I think if football can contribute to open up some doors and to make people meet and discuss with each other," Infantino said, "we will not solve all the problems of the world but maybe we'll get a little step closer in at least starting to understand each other a bit."

After coming under pressure from human rights groups since winning FIFA's hosting rights vote in 2010, Qatar was forced to improve worker rights and improve conditions. FIFA has told potential new co-hosts they have to provide human rights guarantees, which have yet to be specified publicly. FIFA Greg Clarke of England raised the issue in Friday's council meeting.

Qatar World Cup organizers said in a statement they remain "open to the process of discussing a potential expansion" but stressed they are pressing ahead with planning for only a 32-team tournament.

"It has always been our mission to ensure that this World Cup belongs to the entire Arab World and the Middle East," the organizers said. "We will work with FIFA to determine whether or not a viable operating model does exist and, importantly, whether it is in the best interests for football and for the tournament, and for Qatar as the host nation. After these consultations, the final decision will be made by Qatar and FIFA."

FIFA decided in January 2017 that the World Cup will be 48 teams, but only starting in 2026 before the hosts were chosen. The United States, Canada and Mexico won a vote last year.

The FIFA Council agreed to introduce a pilot tournament of an enlarged 24-team Club World Cup in 2021 despite European opposition. A quadrennial version would launch in the summer of 2021 to replace the current Club World Cup, a seven-team event played each December.

The European Club Association and European governing body UEFA does not want FIFA adding competitions prior to agreement on a new international match calendar from 2024.

"Our clubs won't participate in the 2021 edition of the Club World Cup," the ECA told the AP, "and we will assess participation in editions after 2024."

The Club World Cup fills the slot previously reserved for the Confederations Cup, which had served as a test event in a host nation a year before the World Cup.

The seven European members attending the council meeting voted against FIFA's plans, which they see as threatening the status of the Champions League.

"UEFA shares the ECA's view that the international match calendar in 2021 does not provide any realistic option to stage a 24-team Club World Cup and that it should furthermore not be played at a time when players should have a well-deserved rest period," European soccer's governing body said in a statement. "UEFA supports the views of its stakeholders and has the duty to protect the health of players."

In 2021, FIFA envisages the window for international matches — likely to include 2022 World Cup qualifiers — from May 31 to June 8. The Club World Cup would be held from June 17 to July 4, while the African Cup of Nations and CONCACAF Gold Cup could be played from July 5-31. European club seasons typically start around mid-August.

According to a FIFA document seen by the AP, South America would have six slots in the first edition. Three each would go to teams from Africa, Asia and CONCACAF, which represents North and Central America and the Caribbean. Oceania would get one. The confederations would decide their own qualification process. Winners of the eight three-team groups would advance to the quarterfinals. Teams would play two to five matches over a maximum of 18 days.

Infantino said five members of the Council did not attend the meeting, the first for FIFA's leadership in the U.S. since American law enforcement arrested many of the sport's top officials in 2015 on corruption charges. There were two absent FIFA : Sheikh Salman, representing Asia, and Ahmad Ahmad, who leads soccer in Africa.

Video review has been approved for the Women's World Cup, which runs from June 7 to July 7.