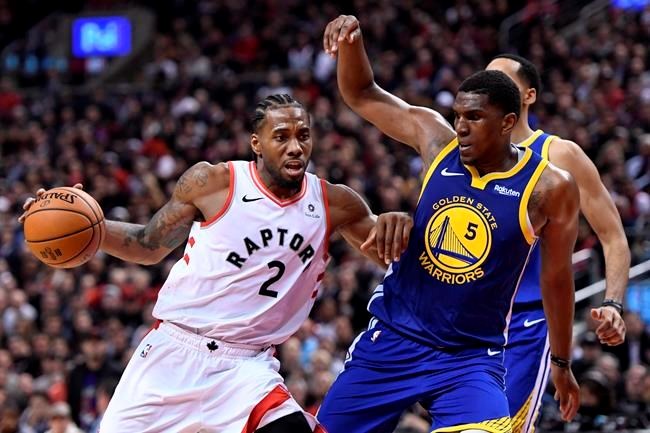 TORONTO — The Toronto Raptors defeated the Golden State Warriors 118-109 in Game 1 of the NBA Finals on Thursday night at Scotiabank Arena.

The Tenors provided an elegant start to the proceedings with a rousing rendition of "O Canada."

The vocal crowd at Scotiabank Arena essentially drowned out the trio — Clifton, Fraser and Victor — by the end of the anthem.

The performance fuelled an energy level in the building that was already palpable. Jordan Smith sang the U.S. national anthem.

Danny Green put Toronto on the board with a three-point shot, holding his extended right arm in the air for an extra split second after the ball swished through the basket.

The sellout crowd, which was ready to explode after the pre-game introductions, let out a mighty roar when Green connected.

The Toronto forward has struggled with his shooting at times in the post-season. He was held scoreless in the Raptors' Game 6 win over Milwaukee in the Eastern Conference final.

Kawhi Leonard had a quiet first quarter but found his rhythm late in the opening half, showcasing his dazzling ball control and crafty skillset for a three-point play that gave Toronto a 52-45 lead.

Leonard made Andre Iguodala bite on a fake before spinning and powering to the basket, drawing a foul from Stephen Curry.

The shot dropped and a befuddled Curry sat on the court for a few seconds with his arms resting on his knees.

MY NAME IS JONAS

As expected, Stephen Curry was a consistent thorn for the Raptors from beyond the arc.

But Golden State teammate Jonas Jerebko took a turn with a three-pointer early in the fourth quarter that pulled the Warriors within four points at 90-86.

The Raptors were able to restore their double-digit lead moments later, but Golden State showed it would not fold easily.

The high-arching shot rattled around the rim before dropping to thunderous applause.

The three-pointer gave Toronto a 110-98 lead and the Raptors closed things out from there.