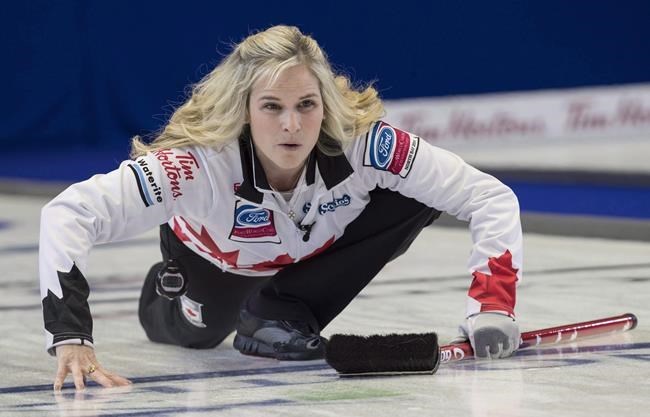 SYDNEY, N.S. — Jennifer Jones is back at the Scotties Tournament of Hearts on an exemption as Team Canada. Rachel Homan had a guaranteed spot too before locking up the Ontario berth.

Both teams had players at the 2018 Winter Games in Pyeongchang, which weakened the field at last year's national women's curling championship.

There are no Olympic conflicts this time around and the Scotties field is more robust as a result.

Homan and Jones headline an entry list that includes the top seven teams in the Canadian rankings.

"You have your favourites," said Manitoba skip Tracy Fleury. "Homan is always tough, Jones is always tough, of course. But then there's a lot of other teams too that if they get hot in that week, they can definitely win it too.

"So I really think anything can happen."

Homan is the clear No. 1 this season after three Grand Slam victories and a World Cup win. Einarson is next, followed by Jones, Alberta's Chelsea Carey, Fleury, Scheidegger and seventh-ranked Robyn Silvernagle of Saskatchewan.

"It's the strongest (field) I can remember in a long time," said Carey. "I think the addition of a wild-card team immediately makes it stronger than it used to be.

"There really weren't any major upsets in any provincial championships and typically there is at least one. It's going to be a great field."

Curling Canada created an exemption last spring to allow Jones to come back as defending champion despite having only two returning members, one short of the minimum.

The Winnipeg skip won last year's Scotties with lead Dawn McEwen, second Jill Officer and substitute Shannon Birchard, who filled in for Kaitlyn Lawes at third. Lawes did not play because she was representing Canada in mixed doubles in Pyeongchang.

Officer, who stepped away from competitive curling after last season, was replaced at second by Jocelyn Peterman.

The national federation created a different exemption for Homan's team, which represented Canada last year in Pyeongchang and couldn't return to the Scotties to defend its 2017 title.

Homan would have been given an automatic berth in the wild-card game had she not won the Ontario title. Even if she would have been eliminated in provincial playdowns, her strong ranking would have secured a play-in spot.

Einarson beat Carey last year to become the first Team Wild Card in Scotties history. The Scotties format was changed in 2018 after the unpopular relegation system was dropped.

Einarson's team made it to the final before losing to Jones, who (along with Officer) tied Colleen Jones's record of six Scotties victories. Homan, meanwhile, is chasing her fourth national women's title.

"I think you're sticking your head in the sand if you're not looking at Homan and Jones as the two top teams in the world right now, certainly in our country," Carey said. "I think that's pretty obvious. I think that's every bonspiel you go into, you have to look at the two of them as being the favourites, or certainly among the favourites. So I don't think that's any different here.

"But with it being such a strong field, certainly it's not a gimme by any stretch of the imagination. There's lots of teams that could make a press for the playoffs and then you never know what happens in the playoffs."

The top four teams from that pool will advance to the playoffs starting Feb. 23. The semifinal and final will be played Feb. 24.

The winner will represent Canada at the March 16-24 world championship in Silkeborg, Denmark, and earn a berth in the 2020 Scotties in Moose Jaw, Sask.

The men's national championship — the Tim Hortons Brier — is scheduled for March 1-10 in Brandon, Man.