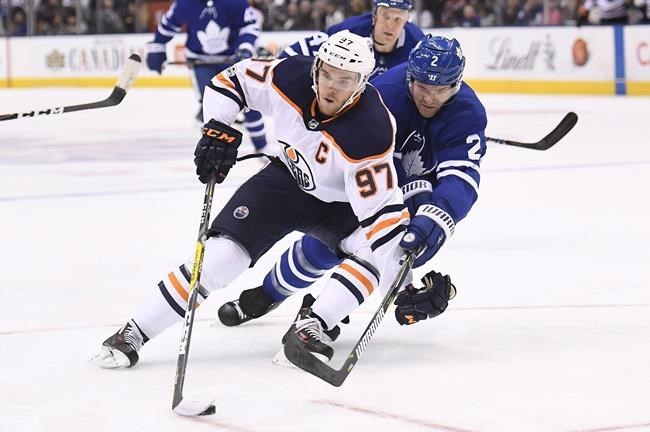 TORONTO — Leaning up against a screen in the locker room at the Maple Leafs' practice facility, Auston Matthews looked slightly annoyed by one particular query.

"What, for you, stands out about (Connor) McDavid?" Toronto's star centre was asked.

"I don't think I need to answer that question," Matthews responded, rubbing the side of his face and forehead. "You guys all know."

And so do the Leafs.

The Edmonton Oilers are expected to have their all-world captain back in the lineup Wednesday following a two-game suspension for an illegal check to the head on New York Islanders defenceman Nick Leddy when they visit Toronto.

So how do you try to slow down the fastest, arguably most skilled player on the planet?

"That's a great question," Leafs centre John Tavares said with a smile following Tuesday's on-ice session. "You've just got to make it as difficult as possible for him. It's a lot easier said than done.

"He's missed the last couple games. We expect him to be shot out of a cannon."

The 22-year-old McDavid, who cheered for the Leafs as a kid growing up in nearby Richmond Hill, Ont., sits third in the NHL with 85 points (32 goals, 53 assists).

Put another way, he's been in on exactly half of the Oilers' 170 goals this season.

Tavares, who like McDavid was granted exceptional status to play junior in the Ontario Hockey League at age 15, said Edmonton's superstar is more than just blinding speed — it's his awareness and vision coupled with those wheels that separates him.

"His ability to read the play, anticipate is arguably the best in the league," said Tavares, who has a team-high 35 goals. "And then his ability to keep his speed and maintain it for as long as he can, and doing it with the puck and then being able to make plays at that top-end speed and really be able to see the play two, three steps ahead."

Toronto will be looking for a better first period against Edmonton after falling behind 3-0 to Montreal on Saturday and 1-0 to Buffalo before flicking a switch and storming back for consecutive come-from-behind wins.

"We never really lost our cool," Matthews said. "Everybody had faith in one another.

"We should be able to take control of the game early on instead of letting the other team dictate."

The Leafs sat a point back of Boston for second in the Atlantic Division heading into Tuesday's action, while the Oilers, who have two of the NHL's top-7 scorers in McDavid and Leo Draisaitl (38 goals, 38 assists) were seven adrift of the second wild-card spot in the Western Conference.

Edmonton has registered six of a possible eight points in its last four games, but is just 3-8-4 over its last 15.

"Connor, being from this area, is going to be fresh," said Toronto head coach Mike Babcock, whose team visits Edmonton on March 9. "McDavid's got that higher octane of speed. It's going to be a challenge for us.

"We'll have to be above the puck and try not to turn it over when he's on the ice."

Nazem Kadri has been assigned to frustrate McDavid in the past — he still has eight points in five career games against Toronto — but the Leafs centre is out with a concussion, meaning that responsibility will fall to either Matthews or Tavares.

"You're playing against stars every night," said Matthews, who scored his 30th goal of the season Monday. "You could be against Sidney Crosby, the next night Patrice Bergeron.

"There's good players on every team. There's superstars on pretty much every team."

But only one Connor McDavid.

Notes: Kadri, who hasn't played since Feb. 19, skated before Tuesday's practice, but left before the main session. ... Leafs defenceman Jake Gardiner missed his second straight practice. He played both Saturday and Monday, but Babcock wasn't sure if the blue-liner will be available Wednesday. ... Acquired from Winnipeg for Par Lindholm just before Monday's NHL trade deadline, Nic Petan skated with his new team for the first time. The 23-year-old forward from Delta, B.C., had 23 points in 108 games over parts of four seasons with the Jets, but never found traction and had been a healthy scratch much of 2018-19. "Wrong fit," Petan explained. "I played quite a bit of games, but I don't know if it was in the right or wrong position. But (it's) an unbelievable organization over there ... nothing but respect for those guys."