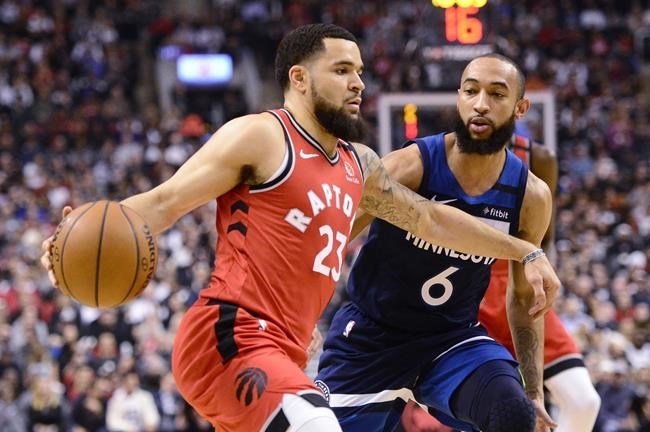 TORONTO — Fred VanVleet says people in the United States are reaching a boiling point after hundreds of years of racism.

The Toronto Raptors guard was asked Monday what he thought of the protests happening in major cities across the United States following the death of George Floyd in Minneapolis. He was killed after a police officer held his knee on Floyd's neck for several minutes and ignored his cries of distress.

"It's really unfortunate, but what's even more unfortunate is I think we've seen this movie before, and I think people are tired," VanVleet said. "People are tired of the racism, and of discrimination and abuse.

"Unfortunately this man had to lose his life, but I think it was a boiling point and people are just fed up, and I think it's time for a change and everybody's seeing that."

Floyd, a black man who was in handcuffs at the time, died after police officer Derek Chauvin, who is white, ignored bystander shouts to get off him and Floyd's cries that he couldn't breathe.

An autopsy commissioned for Floyd's family found that Floyd of asphyxiation due to neck and back compression, the family's lawyers said Monday.

Chauvin has been charged with third-degree murder and second-degree manslaughter.

VanVleet's comments come a day after Raptors president Masai Ujiri said in a Globe and Mail column that conversations about racism can no longer be avoided.

"The curtains are being pulled back and you can see everything for what it is. See who stands where," VanVleet said from his home in Rockford, Ill.

"We're going to have to move forward through this eventually, but right now there's just a lot of emotion, and rightfully so. We're talking about hundreds of years of pain and suffering for an entire culture of people."

"Everybody's tired," Powell said Monday. "Everybody's tired of this discrimination, this racism that's been going on for . . . 400-plus years. And you're seeing that now. And I think the protests are rightfully so."

The 27-year-old from San Diego, Calif., said while he was for the mass protests, he disagreed with the destruction and looting of businesses.

"Everybody's angry, everybody's responding off emotion," he said. "(But) the community is all rallying behind this cause, and the destruction of buildings and the stealing this, that and the other, you're kind of taking away a light that needs to be shone on the situation.

"So, the peaceful protests, and even if you're angry and you're shouting and you're voicing your opinion, that's great, but the destruction and things just kind of taking away from the grand scheme of things, it takes an extreme to bring a light to bring actual true progress. And hopefully with all of this, we're able to actually take some big leaps and strides to a resolution to this."

Raptors' veteran point guard Kyle Lowry said in a statement posted on the Raptors' Twitter feed that he is worried for his two sons.

"How can I explain to my four-year-old and eight-year-old that being black in America comes with a chance you can be harmed or killed just because of the colour of your skin, the texture of your hair, the way you walk, anything they might want to say that makes you black," Lowry said.

"It's sad because I can't explain it. I will protect them until the day I die the best I can, but it's going to be a time when I'm not there to take the fall for them so I'm trying to find a way to say just survive."

"It's big steps. Nothing small is going to fix this, he said. "I think the system that's in place is not for us, it's not for everybody, it's for a specific set of people. Obviously there's ways to succeed in that system, but it's definitely not an even playing field. So there's a lot of things that need to be changed, whether it's laws or policies, or as you can see some police procedures that need to be updated. Guys need to be trained better.

"I don't have all the answers, obviously, but I think the first step is admitting that there is a real problem."

Powell said he's received numerous texts and emails from people wanting to help. He encourages everyone to make their voices heard.

"So speak up, use your voice, use your platform, no matter what it is, doesn't matter how many followers you have, no matter what job you have. If you see wrong being done, that's where you can be the most effective. The more and more people who come out of the shadows of being shy and afraid and timid, of speaking their mind, the better this is going to be. And you see that now, with people all over and really coming together and saying enough is enough."

Meanwhile, MLB's Toronto Blue Jays and the NHL's Montreal Canadiens released statements in support of the black community Monday, joining the many athletes and sports organizations that have done so over the last couple of days.

This report by The Canadian Press was first published June 1, 2020.