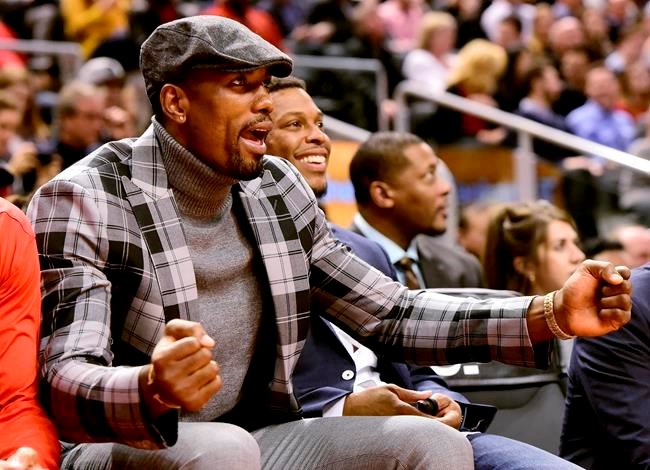 Whether it was his playful "How Bored Are You?" social-media posts, his online talent show, or his workout videos, Raptors forward Serge Ibaka was one of Toronto's most visible athletes in the early days of the COVID-19 lockdown.

Ibaka's posts provided a sense of lightness during a time of so much uncertainty.

Despite being in his just fourth season as a Raptor, the 30-year-old Congolese forward said he enjoyed engaging with fans.

Ibaka held a FaceTime session with staff at Toronto Public Health in late March, asking Dr. Eileen de Villa, the city's medical officer of health, what people can do to keep safe during the global pandemic.

More than three months later, Ibaka and the Raptors are in the middle of a global COVID-19 hot spot in Florida, uneasily preparing for the NBA restart later this month. The Sunshine State reported a record 11,445 new cases of the infection on Saturday.

"Honestly it's really concerning," Ibaka said. "Hopefully everybody has to follow the rules, every player, when we get in the bubble in Orlando, we can respect all the notes that they're going to give us.

"But I have my daughter (Ranie, 14) who lives here in Orlando, and it's kind of scary a little bit. Thank God she is OK, and everyone around her is OK."

The Raptors are still limited at practice to one player shooting per net, and no more than four players in the gym at a time.

"It's better than nothing," Ibaka said after the 30-minute drive back to the team's hotel from his practice session. "It's helpful. And also, just seeing the guys around I think is good too."

They'll begin practising in earnest when they travel from Naples to Orlando on Thursday.

They'll face their first competition in more than four months when they play the Houston Rockets in a scrimmage on July 24 at Disney World. The Raptors will also face Portland on July 26, and Phoenix on July 28. They tip off the eight-game seeding round on Aug. 1 versus the Los Angeles Lakers.

Ibaka waited 10 seasons to win an NBA championship — he made eight previous post-season appearances, and played in the Finals with Oklahoma City in 2012.

This post-championship season, suspended on March 11 due to COVID-19, has been "a little bit weird with everything that's going on."

"Whatever happened last season is over, and we've got to try to put our mindset so that it's ready to go for this one," Ibaka said. "We know it's going to be hard, it's going to be a challenge, and everyone is going to come for us because we are the champs so we have to be ready."

If there's a silver lining to this fractured season for the Raptors, they battled an enormous amount of injuries to major players before play was halted. Sitting out for more than three months has allowed players to heal.

What is Toronto's ceiling?

"Everything. We believe in us. We have the experience. We have the championship mentality already," Ibaka said. "We have confidence. But now it's time to go. Time to go to work, and we're ready."

The Raptors are one of 22 teams that will centralize at Disney World next week. A long playoff run could see them there for more than three months.

Major League Soccer is descending on Disney World as well. The MLS is Back Tournament is scheduled to kick off on Wednesday there, but there have been numerous travel delays among the 26 teams after several FC Dallas players tested positive for COVID-19.

This report by The Canadian Press was first published July 3, 2020.