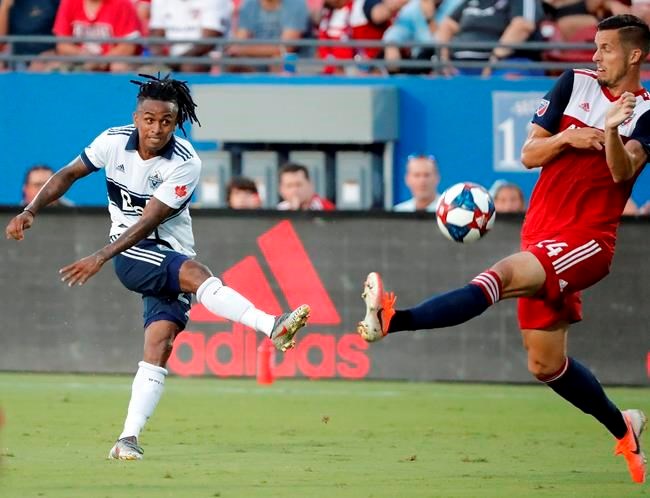 VANCOUVER — The Vancouver Whitecaps have shown they can rally, completing last-minute comebacks to snatch points from opponents multiple times this season.

Now the squad needs to prove it can win, too.

The Whitecaps are undefeated in their last six outings, but just one of those games resulted in a win. Instead, the club has eight draws on the season, tied with New York City FC for the most in Major League Soccer.

"We need to find a way to continue to not get beaten, but to turn some of these draws into wins," midfielder Andy Rose said Wednesday after the 'Caps battled to another 2-2 draw against F.C. Dallas.

Vancouver (4-6-8) battled back from a 2-0 deficit to capture the single point in a performance that coach Marc Dos Santos said demonstrated resiliency.

"It's a team that, when we're down, we realize the things that need to be better. We push, we keep believing. And that only happens when you have a group that believes in each other and a staff that believes in the players," he said.

"The important thing at the end of the day is that every point is going to matter to get in a playoff spot."

The Whitecaps currently sit one point below the playoff bar, in ninth place in the Western Conference.

Their next opportunity to clinch a victory and add to the point total will come Saturday when they face off against the Seattle Sounders for the second of four-straight away games.

"We go there with the sort of mentality that we really want to get points out of this road trip," Rose said. "And we look forward to it."

The Sounders (7-4-5) will be well-rested heading into the contest, playing their most-recent MLS game back on June 5. The time off was much-needed for Seattle, which lost three in a row heading into the international break.

The Whitecaps, meanwhile, are in the midst of another punishing stretch that will see them compete three times in seven days, all without the help of five key players who are away on international duty.

Dos Santos made minor adjustments to Wednesday's lineup to compensate for the absences and fatigue. Everyone is crucial to the team's success at this point of the season, he said.

Defender Brendan McDonough got his MLS debut with the 'Caps on Wednesday night and could be back in the lineup in Seattle.

Vancouver has what it takes to extend the Sounders losing skid, McDonough said.

"The key is just to stay organized defensively," he said, adding that the 'Caps need to stay focused, compact and limit offensive opportunities.

"We feel right now with the streak that we're in a good moment and hopefully we can keep it up going into Seattle."

HOME TURF ADVANTAGE: The Sounders have yet to lose in Seattle this season, posting a 6-0-2 home record. The 'Caps have a single win and three draws on the road.

BEAT THE 'KEEPER: The Whitecaps will likely have to get past Sounders goalie Stefan Frei to secure a victory on Saturday. That's no easy task, considering that the 33-year-old boasts 51 saves on 70 shots this season, good for the third-most stops in MLS. He'll be looking for his sixth clean sheet of the year against Vancouver.

ROSE RETURNS: Saturday will mark the first time Vancouver's Rose faces his former squad. The 29-year-old midfielder spent four seasons with the Sounders before he moved to the U.K. to play in 2015. Rose was out with a facial fracture and concussion when the 'Caps and Sounders fought to a scoreless draw in Vancouver on March 30.