Sens deal Stone to Knights, Preds get Simmonds as West teams load up at deadline 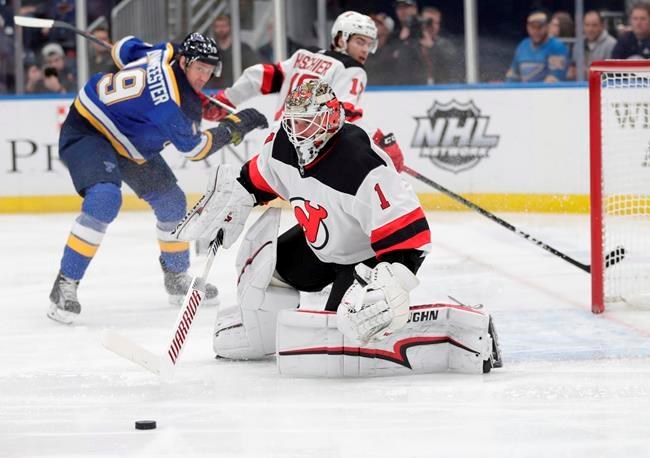 One year later, the Ottawa Senators and Vegas Golden Knights finally came together on a deadline day blockbuster.

The Senators and Golden Knights were thought to be close on a deal involving Ottawa captain and star defenceman Erik Karlsson at last February's deadline, but the potential swap never materialized.

The two-time Norris Trophy winner was eventually traded to the San Jose Sharks in September.

Stone was the last of three unrestricted free agents to exit the nation's capital in the last four days after fellow forwards Matt Duchene and Ryan Dzingel were traded to the Columbus Blue Jackets in separate moves as last-place Ottawa strips its roster down to the studs and continues on the path of a potential rebuild.

Stone, who is expected to sign a contract extension with Vegas, Duchene and Dzingel accounted for 41 per cent of the Senators' goals this season before the trades. All three are in the prime of their careers, as is Karlsson.

"It's the players' right if they want to stay or not stay," said Senators general manager Pierre Dorion, who also sent minor-league forward Tobias Lindberg to Vegas in the Stone deal. "We've made it clear through this process to these four players that we're in a rebuild.

The Golden Knights were looking forward to getting their new addition on the ice.

"He plays a complete game, plays every situation, and he's going to really help our hockey club," Vegas head coach Gerard Gallant told The Associated Press. "He was the top guy on the board and we went out and got him, so it shows our players what we want to do and get things on track here and get going again."

In all, teams completed 20 trades involving 32 players and 16 draft picks — including five conditional selections — on Monday.

An arms race emerged in the Western Conference, where the Nashville Predators acquired physical winger and pending unrestricted free agent Wayne Simmonds from the Philadelphia Flyers for forward Ryan Hartman and a conditional fourth-round pick in 2020.

The Winnipeg Jets scooped up centre Kevin Hayes from the New York Rangers for winger Brendan Lemieux, a first-round pick in the 2019 NHL draft and a conditional fourth-rounder in 2022.

A pending UFA, the six-foot-five, 216-pound Hayes should give the Jets a presence down the middle on the second line as the club readies for another run at the Stanley Cup after making the Western Conference final last spring.

"It's obviously tough to leave New York, but I'm excited to join the Jets," Hayes said. "Everyone knows how good they are and the type of players they have.

"I'm excited to get going."

Winnipeg actually made six trades in all, including the addition of centre Matt Hendricks from Minnesota, defenceman Bogdan Kiselevich from the Florida Panthers, and blue-liner Nathan Beaulieu from the Buffalo Sabres in exchange for picks, while Nic Petan was flipped to the Toronto Maple Leafs for Par Lindholm in a swap of forwards.

Gudbranson's time in Vancouver was marred by inconsistent play after the third overall pick at the 2010 draft was acquired from the Florida Panthers in 2016 in a move to add toughness.

"He had some injuries that kind of set him back," Canucks GM Jim Benning said. "Maybe the style of game we played wasn't a fit to his game.

"But I've got to give him credit — he stuck up for our guys, he fought for our team, he was a good penalty killer."

The Calgary Flames secured some blue-line help with the acquisition of defenceman Oscar Fantenberg from the Los Angeles Kings for a conditional fourth-rounder in 2020, while the Edmonton Oilers didn't make a move prior to the deadline.

The Blue Jackets added to their back end after the recent Duchene and Dzingel deals by nabbing Adam McQuaid from the Rangers for minor-leaguer defenceman Julius Bergman as well as fourth- and seventh-round picks in the upcoming draft.

The Boston Bruins got winger Marcus Johansson from the New Jersey Devils for a second-rounder in 2019 and a fourth-rounder the following year.

Derick Brassard, meanwhile, was traded for the third time in just over 12 months. The winger joined the Colorado Avalanche along with a conditional 2020 sixth-round pick from Florida for a third-rounder in 2020.

Coincidentally, the Avalanche and Panthers were set to meet Monday night in Denver.

-With files from Gemma Karstens-Smith in Vancouver