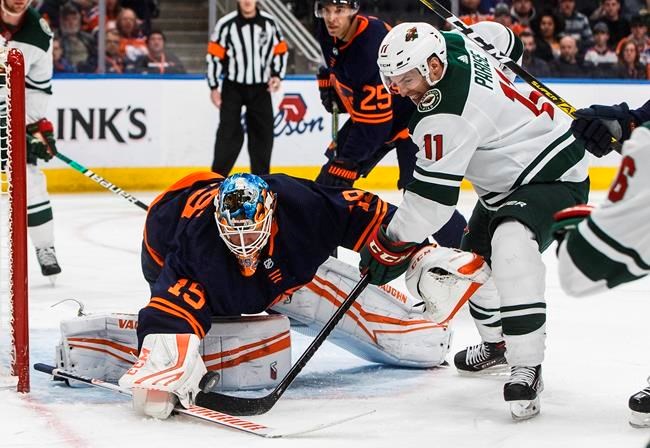 EDMONTON — Don't count the Minnesota Wild out of the playoff picture just yet.

Jared Spurgeon scored three goals as the Wild gutted out an important 5-3 victory over the Edmonton Oilers on Friday.

"We know that no games are going to be easy this time of year," said Wild veteran Ryan Suter of his team's ability to continually battle back in the game. "They got up early, so we didn't have a choice. We stuck with it and (goalie Alex Stalock) played solid and we scored goals and we won."

Kevin Fiala and Carson Soucy also scored for the Wild (29-24-7), who have won two straight and are three points back of a wild-card playoff spot.

"I think the guys were very committed," said Wild interim head coach Dean Evason. "(Leon) Draisaitl's line was just eating us up. I mean eating us up. We really committed to playing better defence.

"We were getting opportunities so we were able to reinforce that between periods, that we're getting our chances guys, but let's tighten up in all areas."

Ryan Nugent-Hopkins had a pair of goals and an assist and Draisaitl also scored for the Oilers (32-22-7), who have lost two games in a row.

"We have to find a way to win a game like that," Draisaitl said. "It's not like they did anything crazy. They played a solid game, but we just shot ourselves in the foot by giving up preventable goals. That's pretty much the story of the game."

It only took 50 seconds for the Oilers to strike first. Kailer Yamamoto dug the puck off the sideboards and found Nugent-Hopkins, who sent a low wrist shot past Stalock.

The Wild responded eight-and-a-half minutes into the opening period as Fiala picked up a rebound off a face-off and made a nice move to power a backhand shot past Oilers starter Mikko Koskinen for his seventh goal in his last nine games.

Edmonton regained the lead with seven minutes left in the first on a three-on-two. Yamamoto dropped the puck back to a trailing Nugent-Hopkins, and he picked the top corner for his second of the game and 17th of the season.

Minnesota tied it back up six minutes into the second period as Soucy buried a high shot through traffic for his seventh.

The Oilers got a gift goal a couple minutes later as a blind backhand centring attempt by Draisaitl hit the back of the skate of defender Jordan Greenway and bizarrely caromed into the Wild net.

The Wild made it 3-3 with seven minutes remaining in the middle frame when Spurgeon wired a slap shot off the post and in.

Minnesota took its first lead midway through the third as a Spurgeon backhand tipped in off Oiler defender Adam Larsson's stick.

Spurgeon earned the natural hat trick late in the game, scoring his 10th goal into an empty net.

Both teams return to action on Sunday. The Wild host the St. Louis Blues and the Oilers start a three-game road trip in Los Angeles against the Kings.

Notes: Oilers captain Connor McDavid practised on Friday and looks like he will return from a quad injury Sunday after missing the last six games. Edmonton was also without Joakim Nygard (hand), Kris Russell (concussion), James Neal (foot) and Oscar Klefbom (shoulder). Zack Kassian also missed the game due to a suspension… It was Minnesota’s 19th game since the beginning of January, but just their fifth one on the road.

This report by The Canadian Press was first published Feb. 21, 2020.