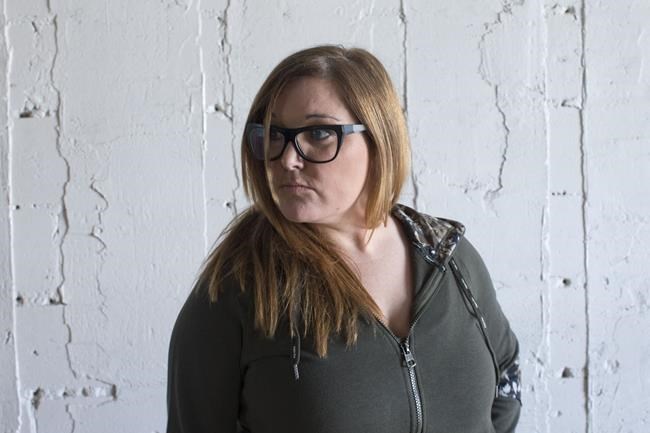 In tracing the triumphant but ultimately tragic life of goalie great Terry Sawchuk, screenwriter-director Adriana Maggs had plenty of clippings and statistics to help her depict his stellar on-ice record.

Harder to parse was the inner turmoil of the taciturn Winnipegger, whose remarkable run with the National Hockey League included a career record of 103 regular-season shutouts but also left him physically and emotionally shattered.

Sawchuk's off-ice exploits were infamously punctuated by bouts of rage, depression and heavy drinking, and Maggs says she wanted to make sure "Goalie" captured his personal struggles with unflinching honesty.

For that, she turned to the poems of her father, Randall Maggs, whose 2007 book "Night Work: The Sawchuk Poems" portrayed the hockey hero in very human terms.

"I started to understand hockey in a different way after I read his book, because there was the hero and then there was the human being. All of a sudden you realize, 'OK, this goalie, he was a goal tender and he was alone,'" says Maggs, who co-wrote the script with her sister Jane Maggs, co-creator of the CBC mystery series "Bellevue."

"Everyone else was scoring and had the luxury of getting lost in the frenzy and he was just at the other end of the ice waiting to either make the save or to fail. It's just a horrific way of looking at it.... If he made the save he was a hero and if he didn't then the fans would turn on him. I think that he suffered a lot because of that."

"Goalie" also leans heavily on David Dupuis's 1998 biography "Sawchuk: The Troubles and Triumphs of the World's Greatest Goalie" in depicting a tumultuous NHL run for the young phenom, who begins an injury-plagued career in Detroit in 1950, and later moves on to Boston, Toronto, Los Angeles and New York, where he died in 1970.

Newfoundland-born actor Mark O'Brien stars as Sawchuk, and despite being a lifelong hockey fan and player, the former "Halt and Catch Fire" actor says he was stunned to learn how brutal and unforgiving the sport was before hockey masks shielded players from 100-kilometre-per-hour pucks.

Even star athletes were under intense pressure to play entire seasons with broken bones, fearing they would be either traded or shunted to the minors, he noted.

O'Brien saw parallels to ongoing issues that plague the NHL today, including the need for mental health support, and better acknowledgment of the physical risks, especially when it comes to head injuries.

"It's about a life under so much pressure."

Much of that is depicted in the film through demanding tirades of Detroit Red Wings general manager Jack Adams, portrayed by veteran U.S. actor and "The Marvelous Mrs. Maisel" co-star Kevin Pollak.

But getting direct insight from players who knew Sawchuk was tough, says O'Brien, who spoke with several who could share little apart from the Hall of Famer's on-ice prowess. Sawchuk largely kept his personal trials to himself, says O'Brien — except when he learned Adams dumped him to Boston.

"When he was traded, it destroyed him. It broke him down completely," O'Brien says. "He doesn't talk about his emotions, doesn't really talk about himself but when he's traded, he cried immediately."

O'Brien worked with a coach to perfect Sawchuk's crouch between the posts, but says he got invaluable insight when the icon's son Jerry Sawchuk visited the set and actually adjusted O'Brien's stance.

At another point, Maggs says the younger Sawchuk called out a potential inaccuracy in a scene when he saw the actor playing Gordie Howe holding a cigarette.

"He said: 'Gordie didn't smoke!'" chuckles Maggs, whose uncle is former NHL player Darryl Maggs. "So it was good to have him around."

The story is very much a family affair, Maggs acknowledges. In addition to the involvement of her father and sister, her son Owen Maggs plays Sawchuk's older brother Mitch in scenes depicting a troubled childhood, and her young niece and nephew play two of Sawchuk's children.

The mother of the couple's seven children, Pat Sawchuk was key to supporting the battered athlete emotionally and psychologically, says Reilly, who believes the film's glimpse into Sawchuk's home life offers crucial insight into the impact the sport had on family members.

"When they come home to you, you are putting it all back together and that is really hard emotionally," says Reilly, a new mom who tended to her then-four-month-old daughter between scenes.

"I was actually very happy to have been a mother because that role was so about being the mother and putting those kids first in that situation."

"Goalie" opens in Toronto and Vancouver on March 1 before heading to other cities.