'This team is never going to give up': Whitecaps prep for first road test 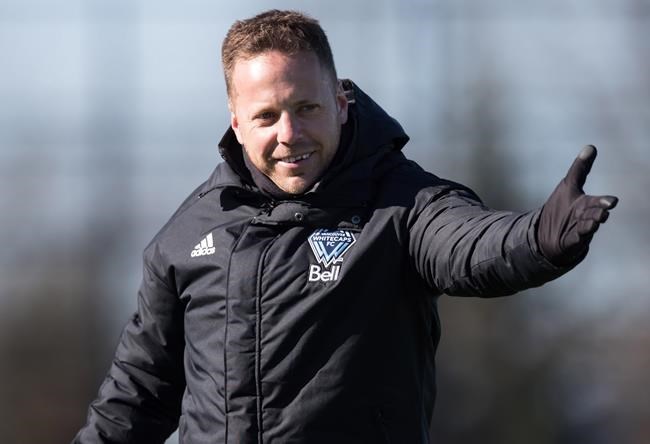 VANCOUVER — The Vancouver Whitecaps know that playing on the road isn't easy.

Travel can be gruelling, especially for squads that call the West Coast home. A stadium full of opposing fans can be intimidating.

"It's tough to be an away team," 'Caps midfielder Russell Teibert said after training on Thursday. "But in order to be a contender for playoffs, in order to be a top team in this league, you have to be a good away team."

Manager Marc Dos Santos has been clear that he expects his completely revamped squad to make it to the post-season this year.

Bringing home points — whether it's three for a win or a one for a draw — will be crucial to that cause, he said.

"That doesn't mean that you'll win all the time but you need a mentality that if you don't win, you don't lose," he said. "At least you get out of the road with points."

The 'Caps will see their first road test of the season on Saturday when they visit Real Salt Lake (0-0-1).

The team will also be looking for its first win after dropping its home opener 3-2 to Minnesota United last week.

It wasn't the Major League Soccer start that centre back Derek Cornelius had wanted. The 21-year-old from Ajax, Ont., joined the Whitecaps in January after spending two seasons playing in Serbia.

"I think for everyone (Saturday) was disappointing because we obviously wanted to start off on a better note," Cornelius said. "But we're all professionals. That's how the game goes sometimes. So we're not going to go sit and think about that too much. We're just going to move on to the next game."

There isn't much that needs to be changed in order to get a better result this week, he added.

"We just need to be cleaner in possession and fix up some of the small details," he said.

Teibert was rehabbing an ankle injury and watched the home opener from the stands. Despite the result, the 26-year-old liked what he saw.

"You're always going to fight through adversity but what I learned about this team is this team is never going to give up," he said, adding that the game showed character and the potential for a strong group.

Every game is a teachable moment, said Andy Rose, who joined the Whitecaps in December after playing in the United Kingdom for three years.

"There's always lessons every time you play, whether you win, lose or draw," he said. "You can always take things from the game and certainly as a new group of players learning a new style of play, continuing to try to understand each other, obviously there was a lot we could learn from the film and a lot we can be better at."

Training this week has been about cleaning up defence and readying for the challenge ahead with Real Salt Lake, Dos Santos said.

The team is one the coach knows well after they unexpectedly bounced his former club LAFC from the first round of the playoffs last season.

While the Whitecaps are in the midst of a rebuild, Real Salt Lake is a team with a solid core.

"It's a group that's been together now for awhile. We can't forget that it's a very similar team to the team that reached the semifinal of the conference and was very close to knocking out Sporting Kansas City," Dos Santos said.

The 'Caps will need to keep a close eye on players like Kyle Beckerman and Damir Kreilach, Dos Santos said.

"Their wingers are all very dangerous in the counter attack and we're aware of that," he said. "That's what makes them a dangerous team."

MORE NEW FACES: The Whitecaps signed two new players this week. The club inked a deal with Thomas Hasal of Saskatoon that will see the 19-year-old goalkeeper play through 2020, with options for 2021 and 2020. The 'Caps also reached an agreement with centre back Brendan McDonough, a former Georgetown University defender they picked up at the 2019 MLS SuperDraft.

INJURY REPORT: Vancouver left back Brett Levis will miss Saturday's game with a right hamstring strain. Centre back Jasser Khmiri and midfielder Michael Baldisimo are also out with injuries to their left knees.