Toronto Blue Jays prepared to be underestimated for upcoming 2019 season 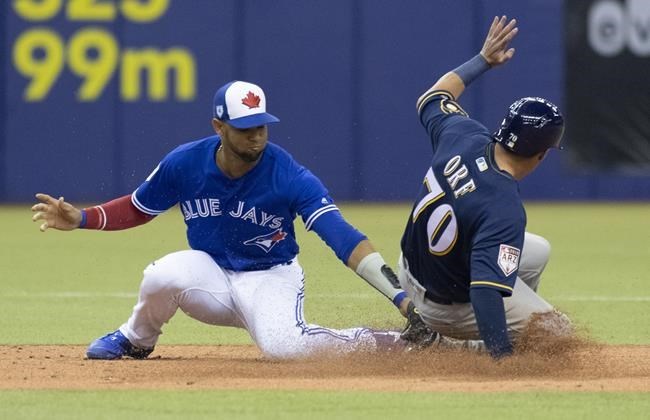 MONTREAL — Randal Grichuk is OK with the experts and pundits who've counted out the Toronto Blue Jays this season.

"It's one of those (teams) where people are underestimating the talent that we have and the way we can go out there and play," said the Blue Jays outfielder.

Toronto has a tough road ahead of it this season in a division with the reigning World Series champion Boston Red Sox and the New York Yankees also expected to return to the playoffs. The Tampa Bay Rays were also a 90-win team in 2018, leaving the Blue Jays and the Baltimore Orioles in the American League East's basement.

"I think if you just look at some of the teams we are competing against, on paper, it seems like a longshot," said Blue Jays centre-fielder Kevin Pillar. "But, our job as professionals is to go out there and play every single game. Sometimes when you take that underdog mentality, you're really playing with nothing to lose."

Toronto mustered just 73 wins last season and battled injuries to Josh Donaldson, Steve Pearce, Troy Tulowitzki and Devon Travis. Once their season was on the verge of being lost, they cut loose Donaldson, Pearce, and veteran pitcher J.A. Happ for rebuilding pieces. Catcher Russell Martin, regarded as a leader, is also gone from last year's squad.

"There's so many intangibles that Russ brought," Pillar said. "(When) we were doing well, he just motivated us to keep going. When things slid, he would just sit in the front of the bus and just, very confidently, believe in this team. He made people believe we were playoff team before we even got there."

This year, Toronto trot out a pitching rotation with Marcus Stroman and Aaron Sanchez returning as familiar faces. Newcomers Matt Shoemaker, Clayton Richard, and rookie Trent Thornton will round it out. Out in the field, veterans like Justin Smoak and Pillar will be counted on to pick up the slack.

However, most eyes will be on Vladimir Guerrero Jr., the leader of the Blue Jays impending youth movement. Rookie studs Bo Bichette and Cavan Biggio have also impressed during spring training, but the hype train is full steam ahead on Guerrero, the team's No. 1 prospect.

Guerrero Jr. suffered an oblique strain during spring training, which saved the Blue Jays from having to decide if he would start with Toronto or triple-A Buffalo at the beginning of the season. But Montoyo says he is ahead of schedule on his return from injury.

Pillar sees that Guerrero Jr. has the potential to become a once-in-a-lifetime generational talent, but is also wary of the monstrous predictions set for him.

"You feel for the kid a little bit," Pillar said. "You wish people would just allow him to go out and be a 20-year old kid and play, and not put those unfair expectations on him."

The most ready of their young prospects at the moment is Danny Jansen, who is slotted in as the starting catcher for this season. Jansen was ranked as the team's third-best prospect per MLB Pipeline in 2018.

"He had a great training camp," Montoyo said. "He's been throwing to the bases. His times to second bases are also very good. Offensively, swinging the bat good."

Montoyo is also a rookie of sorts, making his debut as a MLB manager on Thursday when Toronto hosts the Detroit Tigers. Montoyo spent the last four seasons as a bench coach for the Tampa Bay Rays.

"We're ready to compete every day," said Montoyo. "We got a good group and we're going to play hard and that's all you can ask of these players. Our starters are good so we're going to have a chance every day and I feel good about that."

TORONTO BLUE JAYS AT A GLANCE

THE BURNING QUESTION: When will Vladimir Guerrero Jr. become a full-time major leaguer with the Blue Jays?